“When Mephistopheles shows up wearing a gold Rolex he’s truly a creature for our age.”
— Janet Maslin 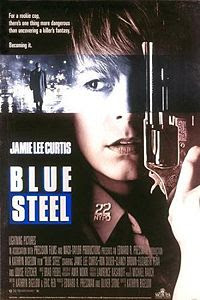 Film critic Janet Maslin must call forth the devil himself to explain the curious appeal of the yuppie to late-80s filmgoers. The yuppie devil at the end of the 80s, though, is more a crafty Mephistopheles than a fearsome Lucifer. A sly character with a keen sense for bargain and an eye for economy, this devil wears his gold Rolex in fashionable display and makes his pacts in public. No more magical, smoke-filled entrances, the devil at the end of the 80s confidently takes his seat at the head of the yuppie bargaining table. The devil’s public appearance as a yuppie points up the heartless greed of that decade, and so Mephistopheles’ gold watch indicates not only his proper place at the yuppie’s table, but also the culpability of those seated across from him (with their own Rolexes, Mont Blanc pens, and Ferragamos). Maslin’s article focuses on two films, Internal Affairs (dir. Mike Figgis, U.S., 1990) and Bad Influence (dir. Curtis Hanson, U.S., 1990), to demonstrate this new trend in late-80s Hollywood cinema, where the formerly successful yuppie was conflated with the newly fashionable serial killer to create the hybrid character of the psychotic, villainous yuppie devil.

In this essay, I want to reexamine a third film that Maslin mentions briefly, Kathryn Bigelow’s Blue Steel (U.S., 1990). Bigelow’s film is unusual since it simultaneously sustains and critiques the new trope of the yuppie devil. Furthermore, the film generated puzzled responses that allow us to see the ambivalent attitudes late-80s spectators held towards this new kind of yuppie villain. For example, even Maslin, in pointing out how yuppie devil films reveal the dangerous effects of “a decade of relative conscience-free complacency,” nonetheless mirrors this complacency by implicitly accepting the merging of yuppie and psycho tropes:

“When [Blue Steel] assumes that [its villain] automatically has the makings of a psychotic killer, it doesn’t imagine itself to be making any kind of leap.”[2]

The self-evident “obviousness” of Blue Steel’s yuppie devil makes the film worth revisiting since its ideological obviousness hides more complex cultural negotiations in the 1980s between economic power and filmic evil. Finally, since Blue Steel features a female heroine who must face the male yuppie devil, the film further questions the obviousness of assumed gender roles in late-80s imaginings of yuppie lifestyles. I will start by offering a reading of Blue Steel which argues that its yuppie devil was hastily dismissed, but is constructed in a significant visual relationship with that film’s heroine. I will then discuss the rapid transformation between 1984-1989 in U.S. popular culture representations of the yuppie from a success story to a symbol of evil.

As Maslin suggested, yuppie devil films like Blue Steel rely on a shared understanding of what the yuppie would signify to a late-80s audience. In that decade, the yuppie was a new figure in the popular imagination who reiterated an U.S. myth of economic success. The term was coined in 1983 and first popularized in 1984, which publications like Newsweek labeled “The Year of the Yuppie.” The word “yuppie,” which comes from mixing the acronym for “young urban professional” with “hippie” or “preppy,”[3] was initially used as a demographic label to describe Baby Boomers

“aged 29 to 35 who live in metropolitan areas, work in professional or managerial occupations, and have an income of at least $30,000 if they live alone.”[4]

Soon, though, “yuppie” became a pejorative description of a lifestyle, and yuppies were identified with a culture of wealth, conspicuous consumption, and conservative politics. Driving a BMW, working on Wall Street, exercising constantly, living in an expensively renovated loft in a gentrified neighborhood, or purchasing imported tarragon vinaigrette from an upscale gourmet store made one a yuppie. A backlash against the expensive, self-absorbed frivolity of the yuppie’s designer lifestyle quickly set in. By the end of the 1980s, the valueless yuppie lifestyle was a ready signifier for the selfish evil born of capitalism, and villains in films like Blue Steel could rely on this signification to scare audiences.

To Read the Rest of the Essay
Posted by Michael at 6:18 PM