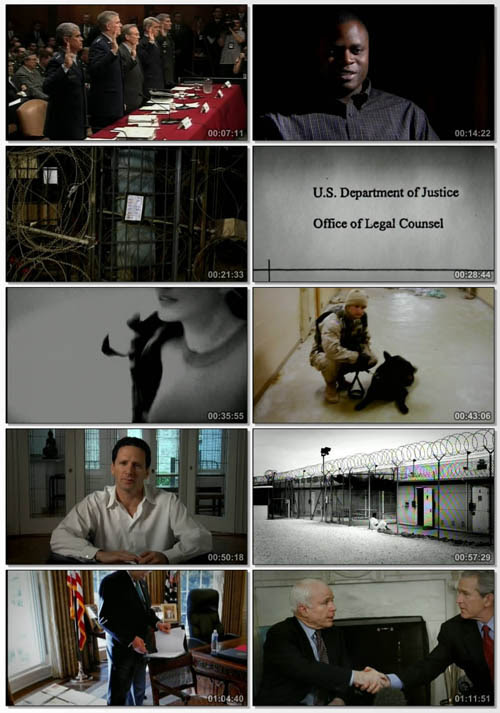 I have organized this essay to explore two large aspects of the torture documentary—epistephilia and affect. To do so, and also to give some indication about genre structures, I provide a textual analysis of three highly accomplished films: two documentaries—Taxi to the Dark Side and Standard Operating Procedure—and a docudrama—The Road to Guantanamo. However, in the way that the documentaries actually work, knowledge and affect are not so neatly divided; all these documentaries elicit emotion and purvey knowledge and are structured to do so. Thus, even though I particularly use Taxi to the Dark Side to consider how it uses voices of authority—and more generally to offer my own to challenge torture epistephilia at this moment in the United States—I also consider how the film uses photojournalistic images for emotion, especially irony. In the same way, I use a textual analysis of Standard Operating Procedure, which takes as its topic just the Abu Ghraib photographs, to explore issues of affect in the torture documentary. However, I also explore how the film works as an analytic documentary, one that explores what the photograph, or indeed witnesses, can and cannot convey. Standard Operating Procedure particularly raises the question of "authenticity" in relation to its interviewees. It uses lengthy segments of people talking, with edited moments from what were clearly very long interviews, and the camera holds on them after a speech to capture just their individual expressions. We are asked to evaluate not only the history of Abu Ghraib torture that these participants tell us about but also how much we trust what they have to say.

Because of the historical role of the Abu Ghraib photographs and their shocking image material, I consider the photographs on their own terms, first in terms of torture, sexuality, and theatricality; and then in terms of elements within those photos that shape viewer response. Finally I offer a briefer textual analysis of The Road to Guantanamo, which as a docudrama has its own particular way of evoking the specifics of a situation and eliciting an emotional and political response.

The documentaries under consideration here:

Taxi to the Dark Side, dir. Alex Gibney, 2007: This film uses the documented homicide of an Afghan taxi driver in Bagram prison as the focus for interviewing Bagram prison guards and interrogators, as well as for investigating U.S. government policy and the legal and social/psychological issues around torture. The film incorporates dramatic reenactments and many still images taken by photojournalists on the political or war beat.

Standard Operating Procedure, dir. Errol Morris, 2008: Morris explores the circumstances around the Abu Ghraib photographs. He interviews participants from Abu Ghraib, freely uses dramatic reenactments, and edits to a highly emotional musical score by Danny Elfman. The film shows many Abu Ghraib photographs uncropped and at length as it questions what photographs can and cannot convey, what's outside the frame. Morris collaborated with Philip Gourevitch to write a book of the same name based on the transcribed interviews, court testimonies and depositions, and other documentation about torture, especially the abuses at Abu Ghraib. Morris has an extensive web site, and he also writes lengthy entries for a blog at the New York Times including many issues directly related to this film.[3] 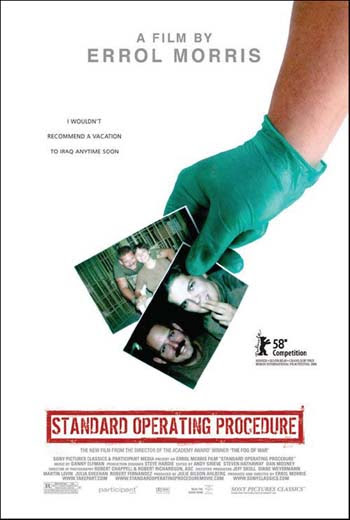 The Road to Guantanamo, dir. Michael Winterbottom and Mat Whitecross, 2006, Channel 4, UK: This low-budget docudrama uses actors and the original figures of the Tipton Three, who provided one of the first exposés of Guantanamo abuses in England. The film traces the long journey of the young men, UK citizens from a Pakistani background, who traveled to Pakistan and Afghanistan shortly after 9/11, were captured by the Northern Alliance, imprisoned by the U.S. military in Kandahar and Guantanamo, and two years later released. Because the film was made for activism, it was released on DVD and television within days of its theatrical release.

To Read the Rest of the Essay
Posted by Michael Benton at 5:28 PM