Robert Scheer: Payback at the Polls

In this live chat session, Robert Scheer responded to readers’ questions and comments about his latest column, “Payback at the Polls,” dealing with the 2010 midterm election.
TruthDig 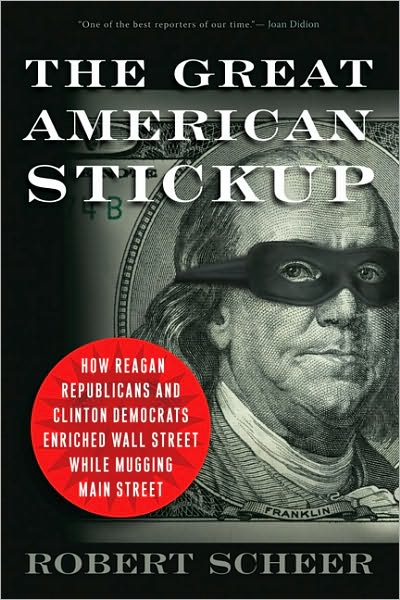 Anderson: The first question is from Bob from Fulton, Mo.: With the president already on record more or less intending to govern as a moderate Republican, what should progressives do in the next two years to influence the conversation?

Scheer: Well, a moderate Republican in the mode of Dwight Eisenhower, who was far better than any of the presidents who came after him, would be welcome. You know, even Richard Nixon favored a guaranteed annual income. What I’m worried about is Obama may do what Clinton did, which was move to the right—to the right of Richard Nixon, to the right of Dwight Eisenhower. And it was Bill Clinton, in response to his reversal in the ’94 election, who ushered in the disastrous radical financial deregulation that caused this whole problem. And Obama, in his extreme stupidity—and I use those words advisedly—turned to the same fools that created this mess under Clinton, to Lawrence Summers and Timothy Geithner, the protégés of that raging genius, Robert Rubin, and gave us this stupidity that said that Wall Street did not need any brakes on the system, any road rules, any rules of engagement.

And as a result, we have 50 million Americans that have either lost their homes or have their mortgages underwater and are thinking of walking away from their homes. We have 44 million Americans living under the official poverty line. We have a disaster going on here, and the people who call themselves progressives, that have sold their soul to the Democratic Party, seem to have an inability to recognize this. They’re yapping cheerleaders. Even Jon Stewart, who I’ve respected in the past, would have Obama on just before the election, and accept this nonsense that, oh, “Summers did a heckuva job.” He only quibbled about the word? This is a disaster that we’ve had. And as a result, the right wing, which can be very dangerous—if they start blaming immigrants, if they cut back needed social programs, yeah, they’re a real danger. And if we don’t do what we have to do to get out of this mess, it’s a really big problem.

Anderson: [Question from Truthdig member chacaboy]: There’s a preamble here. It says, “If Obama had not shown so much deference to Wall Street and the military and such eagerness for an exorbitantly expensive occupation of Afghanistan and excessive military budget, I could have sympathy. But as it is, I cannot distinguish Obama from most Republicans, including George W. Bush.” So now he says: “I would like to ask if there is any truth to the idea that we have something to lose by our critique?” I guess progressives critiquing Obama is the context there. “Is there anything to the argument (i.e. columnist Ruth Marcus) that Obama passed a stimulus package, he got health care done, and he passed financial regulations, and to withdraw support from him now would be to lose more ground by throwing the baby out with the bathwater?”

Scheer: Well, you know, we live in a democracy, and the key to democracy is that we not surrender our common sense or our ability to think. And what she [Marcus] said in that article was just gibberish. I mean, what are we talking about? First of all, the American people have rejected health care. At least half of them find it terrible, and the other half seem to be quite tepid about it. I’m tepid about it. You know, yeah, there are some good things in the health care thing, but there’s no cost control. It forces people to buy health insurance from insurance companies that are not going to do us any favors. This administration gave us something called health reform which is really, at best, mild, and at worst quite costly and disastrous. It certainly is not the thing they should have moved on when they had a banking meltdown, when we had a disaster in the economy. It was a feint. It was an attempt to find some win-win thing which didn’t work out. Health care should not have been the big item on the agenda; it was done for opportunistic reasons, you know, because they didn’t want to confront Wall Street. And instead of spending his capital on making the Wall Street system correct and putting sensible regulations in, he settled for very mild regulations on Wall Street and a very weak consumer agency; he couldn’t even push through Elizabeth Warren as a confirmed appointee with some real power. And as a result, you know, health care basically did not help him, and it’s been mostly a distraction. And the right wing has used it—you know, “socialized medicine” and all that garbage; of course, it’s nothing of the sort.

And so the real problem is that Obama has not only failed to deal with our meltdown; he’s exacerbated it. The stimulus was not effective. An enormous amount of money has been spent making the banks whole. I don’t know why these columnists can’t look at the numbers—the apologists for Obama—why don’t they talk about the over $2 trillion that were spent to take toxic assets off the books of the banks, but not a penny—not a penny really being spent to make people whole who are hurting. Where is the mortgage forgiveness, where is the moratorium on mortgage foreclosures? We don’t even know who owns these homes, 65 million homes, thanks to a system that Bill Clinton helped put in place, with the great liberals at Fannie Mae and Freddie Mac cooperating with the swindlers at Countrywide Mortgage, put in place this Mortgage Electronic Registration Systems so 65 million American homes are owned by a computer bank in Reston, Va., owned by the banks, and we don’t even know who owns these homes.

And so last month we had the highest number of foreclosures, people are in great pain, and progressives still blindly support the president out of some idea that he’s the lesser evil. That’s a betrayal of democracy. We’ve got to call it the way we see it. And the best thing you can do for Obama is to have sharp criticism from the progressive side, and he hasn’t been getting it. He was able to roll over the progressives, he was able to take them for granted, and unfortunately some of those very same progressives were the victims of this folly, like [Sen.] Russ Feingold in Wisconsin. My God, I mean the poor guy was one of the few people who stood against this, and he got overwhelmed by this rage out there. So I really have no sympathy at all for this position. We keep going this way, and it’s going to be a real, a bigger Republican sweep in two years.

To Read the Entire Live Chat and/or Listen To It
Posted by Michael at 9:04 AM