Maximilian Yoshioka: History or Humanity? On Lu Chuan's City of Life and Death: A Nietzschean Perspective on Nanjing

History or Humanity? On Lu Chuan's City of Life and Death: A Nietzschean Perspective on Nanjing
by Maximilian Yoshioka
Bright Lights Film Journal 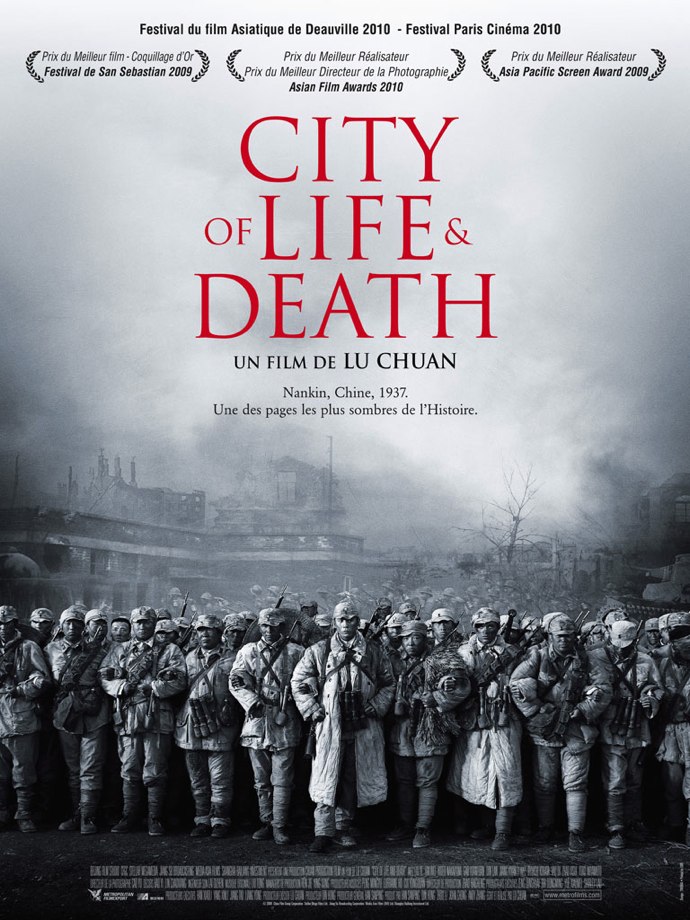 In 1937, the Imperial Japanese Army stormed into the city of Nanjing in China, causing massive physical and human devastation, in what is now known as the "Rape of Nanjing." The incident, and the broader scheme of Japanese militarism and imperialism in which it took place, is today still a constant source of political tension between the two nation-states and their respective citizens. The 2009 film City of Life and Death, by Chinese auteur Lu-Chuan, is a bold attempt to dig up and redefine the specter of Nanjing that continues to haunt the East Asian consciousness. But instead of ideologically measuring one side or the other on a Manichean scale, Lu chooses to focus on the instances of human compassion and solidarity that are able to manifest themselves even in the mindless, brutal atmosphere he so effectively creates within the cinematic world.

What one comes to grasp after seeing the film is the ultimate importance of history as first and foremost a study of the human condition, and of the art of living itself, as opposed to scientifically detached observation and categorization. The continuities of human consciousness and memory mean that our experiences of the past are necessarily intertwined with those of the present; as individuals inescapably grounded in a specific historical period, we are unable to avoid this contemporizing process. Furthermore, it is something that must be embraced, for it allows us to incorporate these historical "peaks" (and crevasses) of human experience into our future actions and values. But in this integration of the present with the past there is the danger of a selective blindness toward the past that must be understood and overcome. However, the purpose of history as a guide to the present and the future, to "life," must still be emphasized over the "neutral," "objective" study of history as "fact," "statistic," or what Nietzsche, in his essay "The Use and Abuse of History, refers to disparagingly as the "World Process" — that is, an attitude of detached passivity toward a historical narrative that is falsely seen as predetermined and unalterable.

City of Life and Death's narrative shifts between several characters on both sides of the conflict, which allows the film to largely transcend distinctions of nationality and ideology and focus on the more basic human tragedy underlying it. One is never informed of the strategic or ideological Japanese justifications for the various massacres and battles throughout the film; there is no attempt to rationalize the violence. Instead the viewer is presented with a war that is absurd, irrational, and pointless, and this nonpartisan alignment allows for the emergence of a more universal, humanistic perspective that links the various key characters in the film through their shared ethical commitments. These include Kadokawa, a Japanese soldier (Hideo Nakaizumi), Lu Jianxiong (Liu Ye), a Chinese resistance fighter, John Rabe (John Paisley), a German who ran a demilitarized safety zone within Nanjing, his assistant, Mr. Tang (Fan Wei), and several female characters of both Japanese and Chinese origin, all of whom are faced with sexual violence and slavery due to the notorious Japanese "comfort women" policies.

This humanistic impulse manifests itself in various ways, but is mostly emphasized in authentic moments of kindness, empathy, and bravery that shine through the madness. At the end of the film, Kadokawa, under orders to execute two Chinese civilians, one of whom is a young boy, instead decides to release them into the wilderness, much to the amazement but also admiration of his inferior officer. Yet even this act of compassion is insignificant in comparison to what he has previously been required to do and see; under the weight of an intolerable conscience, he kills himself. Earlier in the film he also falls in love with a Japanese prostitute brought in to satisfy the soldiers' animalistic needs; his genuine feelings of care and affection for her contrast strikingly with the objectifying and dehumanizing attitudes of the other soldiers. John Rabe, the only nonfictional character in the film, was a member of the Nazi Party, a group, like the Japanese, condemned for its role in the Second World War. Along with several other missionaries, he saved large numbers of Chinese civilians by instating a safety zone within Nanjing, and his inclusion further demonstrates the director's commitment to a study of war centered on individual human beings rather than political identities.