These two mechanisms of symbolic coercion, the arrow and the equation, refer to a broader phenomenon of mindlessness in Alphaville, or what Herbert Marcuse calls "one-dimensional thought," meaning basically an inability to think critically or "negatively" about the conditions of one's own existence. For the person who thinks one-dimensionally, affirmative statements about what already exists (i.e., political institutions, class/wealth relations, dominant ideologies) are all that is possible; consequently, any thought or desire that transcends those existing structures is inconceivable. For Marcuse, the existence of this type of thinking is not so much intrinsic to human beings as it is a socially constructed mechanism built by those in power to reinforce the forms of domination particular to their existence. The dogmatic repetition of the commandment "One should never say why; but only because" by the inhabitants of Alphaville is the ultimate realization of such a system of thought control. Marcuse was writing about contemporary society in the 1960s, the same period in which Alphaville was released. While Marcuse tasked himself with describing the society he saw in front of him, Godard decided to imagine its logical consequence.

Signs of this mental indoctrination, of the subordination of critical thought and agency to rules, regulations, and ideology, are everywhere present in Caution's travels across Alphaville. When he first arrives at his hotel from the "Outlands," he is immediately hassled by staff offering to carry his luggage, direct him to the elevator, guide him to his room, all of which he bluntly refuses, thereby establishing an initial distinction for the viewer between the robotic behavior of the locals and Caution's brash individualism. He is escorted into his room by an attractive but lifeless woman who constantly asks him patronizingly if he is sleepy, if he needs to rest, and so on. Without even asking she begins to undress and offers to take a bath with him. Upon questioning, she reveals herself to be what is known in Alphaville as a "level three seductress," essentially a glamorized prostitute. The apotheosis of this type of mechanical conformism is the way that the locals say "I'm very well, thanks for asking" whenever they meet Caution, even though he never actually asks for such information. The traditional linguistic relationship between question and answer, where one waits until one is asked a question before responding, is replaced with preprogrammed utterances. What one observes here, in a form highly reminiscent of the brainless constant comfort of Huxley's Brave New World, is a society of total convenience and omnipresent guidance, where the strains of independent decision making are now relics of an unscientific past. As Caution himself aptly laments, "People have become slaves of probability."

The one-dimensionalization of thought in Alphaville is also implemented in a more direct fashion, in the control over language and concepts through ideology. As mentioned earlier, one of the main dogmas repeatedly uttered by the scientists and citizens of the city is that one must not ask why, only because. As one of the head scientists tells Caution, "All is linked, all is consequence." He describes the task of Alpha 60 as simply to calculate the consequences and chains of causality that Alphaville will then be bound to follow; in such a system of deterministic logic, there is no room for a "why" to emerge. When Caution responds that he is a "free man," the expression of utter confusion on the scientist's face is truly priceless. By forbidding the use of "why," the technocratic elite of Alphaville is able to insulate its self-contained ruling system from challenge or criticism. Along the same lines, one frequently hears, either from Alpha 60 or from equally robotized humans, the claim that "no one has lived in the past, and no one will live in the future. The present is the form of all life." It is instructive to return again to Marcuse, who in One Dimensional Thought describes the dehistoricization taking place in contemporary technological society, where an ahistorical attitude toward the past is slowly replacing a more holistic perspective that values and interprets the moral and intellectual contributions of historical individuals. Instead, an ideologically driven positivism suppresses the past in favor of a short-term, quantitatively driven measurement of neutral variables. Questions of where or how technological rationalism fits into a broader historical and political narrative are consequently ignored. 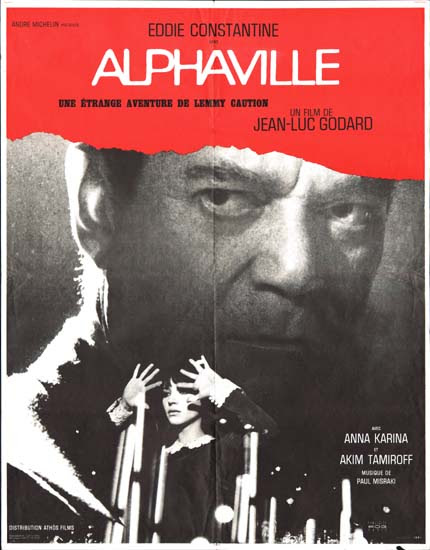 Posted by Michael Benton at 2:19 PM