Rainer Werner Fassbinder shares with many of his contemporary New German cineastes the romantic pessimism about the quest for love and freedom, which gets thwarted by individual limitations and the circumstantial wickedness of society. But, in dealing with the post-war ‘inability to mourn’, Fassbinder is one of the least apologetic filmmakers of the New German Cinema. Although critical of trauerarbeit, he falls neither in the realm of narcissistic self-pity (e.g. Volker Schlondorff’s Tin Drum (1979) or Sander Brahms’ Germany, Pale Mother 1980) nor in the domain of schizophrenic self-justification (as in Syberberg’s Our Hitler, 1978). Instead—as Elsaesser notes, Fassbinder treats German history and fascism “in relation to the present, and its representation across the dialectics of identification, the splitting and doubling of the self.” [2] The BRD Trilogy (Marriage of Maria Braun (1978), Lola (1981), and The Longing of Veronika Voss (1982)) continues in the tradition of Ali, Fear Eats the Soul (1973) and The Merchant of Four Seasons (1972), to interview, and not judge, the Federal Republic of Germany in Adenauer’s era.

The trilogy films are highly stylized and classically narrated melodramas about Maria Braun (Hanna Schygulla), Veronica Voss (Rosel Zech) and Lola (Barbara Sukowa) who represent women in an antagonistic interaction with a patriarchal society. The main characters of each film have in common the persona of a somewhat femme-fatale woman, trapped by her desire for emotional (like Maria Braun), financial (like Lola) and psychological (as in case of Veronika Voss) emancipation. The narratives revolve around the ambivalence of love, with women caught in a corrupt man’s world, and in quest of their post-war socio-economic place. Typically, the road to success for these women in the Fassbinder-depicted patriarchal society, is paved by their mastery of seduction and betrayal (of men). The stories are told against the backdrop of the “economic miracle” which functions as a historical motif, and shapes the characters’ persona and motives, thus driving the causal (melodramatic) relationships between the women and the society to which they belong. Classically narrated as a ‘Sirkian’ melodrama, with lavish lighting and costumes, The Marriage of Maria Braun, Veronika Voss and Lola lend themselves to a conventional reading of a linearly constructed story about the rise and fall of a character; characters with personal histories and individual dramas in a given historical moment.

The exaggerated stylization of the films (especially in acting, colors, costumes, and lighting) also serves as a distanciating device that takes the stories beyond the realm of personal into the possible allegorical reading of the anxiety of the post-war Germany as a nation in a dubious historical stance during the 50s. As Elsaesser notes, the BRD Trilogy is a fulcrum for Fassbinder’s thinking about German history, prompting the thought that for Fassbinder the decade (50’s) was a “metaphor for the different cycles of new beginnings that had marked the new German history, or more a metonymy, where the decade could stand as a part for the whole, or even the fast tracked replay of Germany’s entire modern development after total destruction, best described by the Marxian motto that history always repeats itself, once as tragedy, the second time as farce …” [3]

The stories of the BRD Trilogy (“BRD” stands for Bundesrepublik Deutschland, which is the official name of West Germany) spans the periods of American occupation, Konrad Chancellor Adenauer’s era of the Federal Republic of Germany, and the miraculous recovery of the West German economy (Konrad Adenauer being the first Chancellor of post-war Germany/West Germany, from 1949-1963, who helped guide Germany through its economic miracle). This era began at the Postdam conference (July 17-August 2, 1945), where three Heads of Government of the U. S. S. R., the U. S. A., and the U. K. drafted the principles to govern the treatment of Germany under total occupation in the initial control period. The purpose of the occupation was stated as total destruction of the industrial war machine, complete abolishing of the militarism and Nazism and convincing the German people that they had suffered a total military defeat and that they were responsible for what they brought upon themselves, since their own ruthless warfare and the fanatical Nazi resistance had destroyed German economy and made chaos and suffering inevitable.” [4] A Joint Chief of Staff (JCS 1067) directive given to General Eisenhower reiterated these aims of occupation and went so far as to forbid fraternization with the German population and to prohibit giving the Germans food beyond the minimum requirements necessary to prevent famine and starvation. [5] Given the tight leash of the JCS 1067 directive, the economic miracle in West Germany came at the wake of the Cold War, and at the price of setting the foundations of their infantile democracy on Adenauer’s autocratic manner of government, losing the eastern zone to unquestionable control of Russia, rearmament in compliance with the demands of occupying forces, and reinstating many a Nazi officials within the governing bodies of the Federal Republic.

Ironically, the Federal Republic of Germany sprouted through the widening gap between the communist Russia (who conquered Berlin) and the capitalist Western Allies (who claimed the victory). In 1948, ideological phobia split the Western and the Soviet parties; disagreements over control of Ruhr culminated into Russia leaving the Control Council; and, in a few days, Russians began the blockade of Berlin. This event brought to public view the hostile rift between the old allies (Russia versus France, USA and UK) and eventually it ended in a formation of alliance between the old enemies. Germany was warmly embraced by the United States to the extent that the increasing rancor of West’s denunciation of the Soviet Union gave the Nazis a sense of justification for having been the first to warn against the perilous outcome of Bolshevism. [6] The push for the creation of West Germany came from abroad, especially from the Americans; and the Germans—although ambivalent about the unity of their country—immediately realized the economic opportunities of the Marshall plan that also guaranteed the political support from the United States. As such, they set up a ‘provisional’ Constituent Assembly on July 1st 1948, and to draw a ‘Basic Law,’ which was completed in spring of 1949. [7] Under the terms of the Basic Law an election was held; a coalition government between Christian Democrat Union (CDU), the Free Democrats and the German Party was formed; and Adenauer with majority of one vote was chosen as federal chancellor. The United States, Great Britain and France formally recognized the Federal Republic; however, in a revised Occupation Statute, they reserved to the occupying forces the power over disarmament, demilitarization, reparations, industrial controls in the Ruhr, foreign affairs and foreign trade, displaced persons and refugees, and the protection of Allied forces and their families. The wall that cut through Germany and broke its heart, Berlin, also split the national psyche of the German people into a schizoid of conscience versus reality. Partitioned and lacking sovereignty, guilty of abandoning the Eastern zone, West Germany took comfort from active economic support of United States, given in exchange for their opposition to archrival, the Eastern Block.

Similarly to the dichotomous dynamics that created West German history, the narratives of the BRD trilogy take shape from dialectical interrelations between assumed moralities and existing realities that consume the characters (or a nation) within paradoxical periods of history. Fassbinder’s trilogy juxtaposes the hunger years in Maria Braun with the plenteous days of the economic recovery in Lola, and uses Veronika Voss to draw a psychological trajectory between the contrasting features of German history. In fact, the passage from the convictions of Maria Braun and the longing of Veronica Voss, to the pragmatic Lola, parallels a passage from melancholia and mourning (the objects of remembrance) to action towards reconstruction of new—and not necessarily more promising—realities. 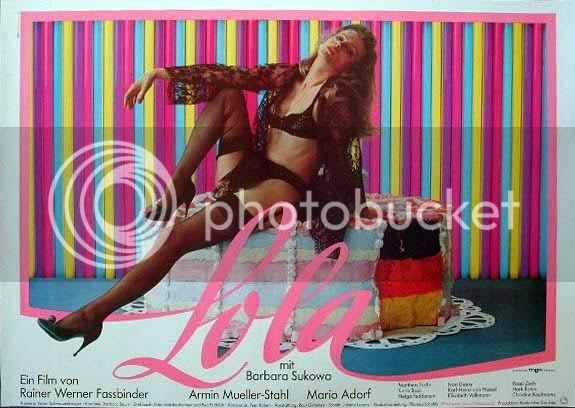 Posted by Michael Benton at 3:30 PM