The Primary Function Of The State

As important as the revelations of Edward Snowden are, the bigger picture is the overwhelming drive by state power to pursue its own strategic designs, to promote the corporate and financial interests with which it is in league, and to protect itself from any threat from the general population to make government truly work for the public.

The independent journalist Jonathan Cook makes the same point (via Facebook, June 26, 2013) that this is the real significance of the recent shocking revelations about surveillance:

'I've been saying since the first Snowden revelations about the NSA that the goal of all this mass surveillance is not to foil terrorism; it's to prevent all challenges to, or efforts to hold accountable, the corporate elites who are plundering our communities and the planet to enrich themselves.'

Cook quotes from a Guardian article which reveals that a UK police unit called the National Domestic Extremism Unit is monitoring 9,000 political activists:

'In recent years the unit is known to have focused its resources on spying on environmental campaigners, particularly those engaged in direct action and civil disobedience to protest against climate change.'

'The tapping of our phone calls and internet activity is being used for exactly the same nefarious purposes: to ensure we remain either docile or intimidated as our political and financial elites grow ever more ostentatious in their depravity and corruption.'

Historian Mark Curtis, who has extensively analysed formerly secret government records for several groundbreaking books, has noted that the primary function of the British state, 'virtually its raison d'être for several centuries – is to aid British companies in getting their hands on other countries' resources.' The British security services have an important role to play in support of 'the national interest':

'As Lord Mackay, then Lord Chancellor, revealed in the mid-1990s, the role of MI6 is to protect Britain's "economic well-being" by keeping "a particular eye on Britain's access to key commodities, like oil or metals [and] the profits of Britain's myriad of international business interests".' (Mark Curtis, Web of Deceit: Britain's Real Role in the World, Vintage, 2003, pp. 210-211.)

A similar picture could be painted of all the major 'democracies', not least the United States.

The shocking extent of the corruption of democracy by big business and its political allies remains mostly off the corporate media's agenda. And corporate-employed reporters and commentators have mastered the art of not making painful connections; painful for powerful interests, that is. No wonder, too, that our major political parties offer no real choice: they all represent essentially the same interests crushing any moves towards meaningful public participation in the shaping of policy.

In the introduction of a new book, Managing Democracy, Managing Dissent, Rebecca Fisher outlines the stranglehold that corporate power, including its mass media sector and political accomplices, has on democracy. Fisher, an activist with Corporate Watch, writes:

'our legal avenues to hold our putative representatives to account, or to persuade them to take heed of our demands, are restricted to actions via pressure groups or tame and largely ineffectual protests about specific, isolated issues. This ensures that the capitalist system is able to reap catastrophic damage upon subject populations and the environment, even to the extent of threatening the habitability of the planet, while remaining, for the most part, insulated from public challenge.' (Rebecca Fisher, editor, Managing Democracy, Managing Dissent: Capitalism, Democracy and the Organisation of Consent, Corporate Watch, London, 2013, p. 2)

The framework of global capitalism – its reigning institutions, policies and practices - tends to be taken for granted in the corporate media. Media academic and activist Robert McChesney points to the 'persistent reluctance' of commentators to 'make a no-holds-barred assessment' of capitalism. He makes a revealing comparison to illustrate this absurdity:

'A scholar studying the Soviet Union would never discount the monopoly of economic and political power held by the Communist Party and the state and then focus on other matters. The political economy would be central to any credible analysis, or the scholar would be dismissed as a charlatan. The same is true of any academic study of any ancient civilization.' (Robert McChesney, Digital Disconnect: How Capitalism Is Turning The Internet Against Democracy, The New Press, New York, 2013, p. 17)

But on the rare occasion when the system is questioned, notes McChesney, even critical writers feel obliged to provide a 'loyalty oath' to capitalism:

'whenever scholars examine their own society, it is generally taboo to challenge the prerogatives and privileges of those who stand atop it and benefit from the status quo, even in political democracies. This may be nearly as true of the United States as it was of the old Soviet Union.' (Ibid., p. 17)

McChesney's observations about 'scholars' extend to media professionals, as he makes clear in his book. As we have often said, one cannot expect a corporate media system to report honestly or accurately about the corporate world.

To Read the Entire Article and Access Hyperlinked Resources 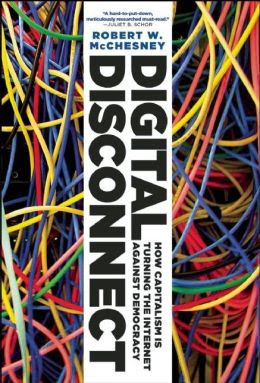