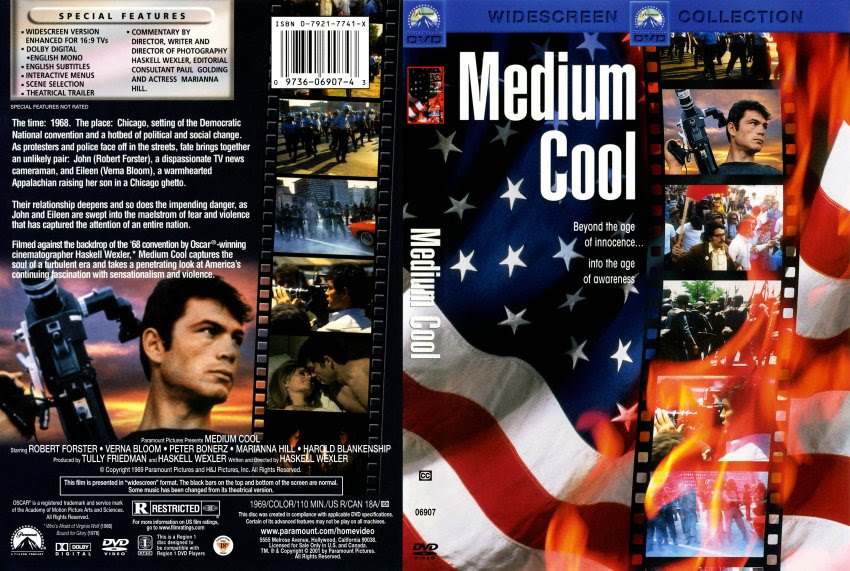 Medium Cool (1969) was a project shadowed by the FBI, saddled with a market-inhibiting X rating, and released with tepid support from a nervous studio. Not surprisingly, despite attracting very favorable reviews, it was not big hit at the box office. But over the years its reputation rose steadily, and eventually the movie found its proper place in the pantheon of the great films of the New Hollywood era. A worthy recipient, then, of the full Criterion Treatment, with a sparkling new special edition DVD and Blu-Ray; among its many features are a new interview with writer-director-cinematographer Haskell Wexler and the very welcome inclusion of (a slightly edited version of) the valuable but obscure 2001 BBC television documentary about the film, Look Out Haskell, It's Real."

As his triple-threat credits suggest, Medium Cool was very much Wexler's project. One of the hottest cinematographers in the business — just off an academy-award winning turn for Who's Afraid of Virginia Wolf (1966) and the big hit In the Heat of the Night (1967) — and with the emergence of a New American Cinema that took low-budget chances on new talent, Wexler was given a shot at the director's chair. And to his credit, the ambitious, confident cameraman didn't play it safe but threw everything he had into a risky project that he believed in.

With a background in documentary filmmaking, Wexler was influenced by a philosophy associated with the French New Wave (many of whose participants had similar apprenticeships), that challenged the reification of a divide between "fiction" and "non-fiction" films. Documentaries, they insisted, could not show an objective truth but offered only one interpretation of events, presented as a narrative following classical storytelling rules; realities that were, moreover, altered by the presence of cameras that produced self-consciousness and performance. Conversely, fiction films, especially those made on locations and with a new wave sensibility designed to reflect the personal experiences of their creators, were in many ways also documentary records of a certain type of reality. With Medium Cool, Wexler dove headlong into the blurry intersection between the two, embedding a fictional (and often improvised) story within very real situations. Often featuring non-actors going about their unscripted business, in many scenes only the principal players are aware that a movie is being made. At times those actors were exposed to real danger — placed, for example, in the midst of what the report of a National Commission would describe a few months afterwards as a "police riot." On the streets of Chicago, Wexler's camera became one among many that were capturing the events as they unfolded — and he was among those tear gassed, and was blinded for twenty-four hours.

The politically sensitive Wexler was irresistibly drawn from Hollywood back to his home town, Chicago, and the Democratic National Convention that would be held there in August 1968. Convinced that "something" would happen there — a violent confrontation, of some type, seemed certain — he crafted a story that could be interwoven into those events, unforeseeable in their specifics, as they unfolded. Wexler was later accused of incitement, but his cameras did little more than anticipate the inevitable explosion. Nineteen sixty-eight took care of the rest.

It was a very bad year. In January, the surprise Tet Offensive fundamentally altered the trajectory of the Vietnam War. The unprecedented communist strikes failed to achieve their military goals, but they made plain that no matter how many troops it poured in, the United States was not going to achieve its political objectives in the war, despite the unceasingly optimistic reports previously proffered by the Johnson Administration. (The U.S. would suffer over 4,700 combat deaths in the first three months of 1968. And with 500,000 American troops in the country, the war was being fought — at best — to a bloody stalemate.) In March, Johnson was embarrassed in the New Hampshire democratic primary by the strong showing of anti-war candidate Eugene McCarthy; within days, Robert Kennedy dropped into the race; within weeks, LBJ shocked the nation by dropping out. In April, Martin Luther King was assassinated. Kennedy, campaigning in Indianapolis, delivered the news to a stunned, mostly black audience, and delivered a short, moving speech appealing for calm. Scores of American cities erupted in riots that night, but Indianapolis was not one of them. In June, Kennedy would be assassinated moments after celebrating victory in the crucial California primary, his final words, "on to Chicago and let's win there," still hanging in the air as the shots rang out.