Little Atoms: Adam Curtis; The Power of Nightmares: The Rise of the Politics of Fear; All Watched Over by Machines of Loving Grace

"Adam Curtis is a producer, writer and director of television documentaries such as Pandora's Box, The Mayfair Set, The Century of the Self, The Power of Nightmares and The Trap. Curtis' programs, though always about serious issues, maintain a sense of tongue-in-cheek humor and are characteristic in their extensive use of archive footage. In his film making, Curtis strives to find meaningful connections between historical situations and often focuses on the impact different ideologies have had on modern society. Adam's latest series, All Watched Over by Machines of Loving Grace..."

Link to the Two Interviews at Little Atoms

Pt 1 of the Little Atoms Interview explores his earlier documentaries, including his influential The Power of Nightmares 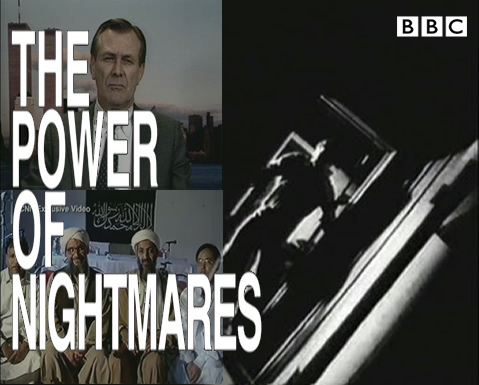 The Power of Nightmares: The Rise of the Politics of Fear

Is the threat of radical Islamism as a massive sinister organised force of destruction, specifically in the form of al-Qaeda, a myth perpetrated by politicians in many countries—and particularly American Neo-Conservatives—in an attempt to ‘unite and inspire’ people following the failure of earlier, more utopian ideologies?

To Watch the 3 Part Series

The first part of the series explains the origin of Islamism and Neo-Conservatism and draws the parallels between the two of their “optimistic visions to change the world”. It shows Egyptian civil servant Sayyid Qutb, depicted as the founder of modern Islamist thought, visiting the US to learn about the education system, but becoming disgusted with what he saw as a corruption of morals and virtues in western society through consumerism. When he returns to Egypt, he is disturbed by westernisation and becomes convinced that in order to save society it must be completely restructured along the lines of Islamic law while still using western technology. He also becomes convinced that this can only be accomplished through the use of an elite “vanguard” to lead a revolution against the established order. Qutb becomes a leader of the Muslim Brotherhood and, after being tortured in one of Nasser’s jails, comes to believe that western-influenced leaders can justly be killed for the sake of removing their corruption. Qutb is executed in 1966, but he influences the future mentor of Osama bin Laden, Ayman al-Zawahiri, to start his own secret Islamist group. Inspired by the 1979 Iranian revolution, Zawahiri and his allies assassinate Egyptian president Anwar Al Sadat, in 1981, in hopes of starting their own revolution. The revolution does not materialise and Zawahiri comes to believe that the majority of Muslims have been corrupted not only by their western-inspired leaders, but Muslims themselves have been affected by jahilliyah and thus both may be legitimate targets of violence if they do not join him. They continued to have the belief that a vanguard was necessary to rise up and overthrow the corrupt regime and replace with a pure Islamist state. At the same time in the United States, a group of disillusioned liberals, including Irving Kristol and Paul Wolfowitz, look to the political thinking of Leo Strauss after the perceived failure of President Johnson’s “Great Society”. They come to the conclusion that the emphasis on individual liberty was the undoing of the plan. They envisioned restructuring America by uniting the American people against a common evil, and set about creating a mythical enemy. These factions, the Neo-Conservatives, came to power under the Reagan administration, with their allies Dick Cheney and Donald Rumsfeld, and work to unite the United States in fear of the Soviet Union. The Neo-Conservatives allege the Soviet Union is not following the terms of disarmament between the two countries, and, with the investigation of “Team B”, they accumulate a case to prove this with dubious evidence and methods…

The Soviet invasion of Afghanistan on 25 December 1979 gives a common cause to an extraordinary alliance of radical Islamists in Afghanistan and around the world and to the neo-conservatives in the US, as a key battleground of the Cold War. As the United States provides funding and arms–including even Stinger missiles capable of shooting down Soviet helicopters–to Islamic Mujahideen fighters who would fire them, a young wealthy Saudi called Osama Bin Laden is among the many foreigners drawn to Afghanistan. When the Soviets eventually pull out and when the Eastern Bloc begins to collapse in the late 1980s, both groups falsely believe they are the primary architects of the “Evil Empire’s” defeat. Back in America, the Neo-Conservatives’ aspirations to continue to use the United States military power for further destruction of evils are thrown off track by the ascent of George H. W. Bush to the presidency, followed by the 1992 election of Bill Clinton leaving them out of power. The Neo-Conservatives, with their conservative Christian allies, attempt to ‘demonise’ Clinton throughout his presidency with various real and fabricated stories of corruption and immorality, but to their disappointment, the American people do not turn against Clinton. The Islamist attempts at revolution end in massive bloodshed, leaving the Islamists without popular support. Zawahiri and bin Laden flee to the sufficiently safe Afghanistan and declare a new strategy; to fight Western-inspired moral decay they must deal a blow to its source — the United States.

Part 3 — The Shadows In The Cave

This final episode addresses the actual rise of al-Qaeda, in particular by examining the United States’ role in its creation: After their failed revolutions, bin Laden and Zawahiri had little or no popular support, let alone a serious complex organisation of terrorists, and were dependent upon independent operatives to carry out their new call for jihad. In order to prosecute bin Laden for the 1998 US embassy bombings, US prosecutors had to prove he was the head of a criminal organisation responsible for the bombings. They find a former associate of bin Laden, Jamal al-Fadl, and pay him to testify that bin Laden was the head of a massive terrorist organisation called “al-Qaeda”. With the September 11th attacks, Neo-Conservatives in the new Republican government of George W. Bush use this created concept of an organisation to justify another crusade against a new evil enemy, leading to the launch of the War on Terrorism. But after the American invasion of Afghanistan fails to uproot the alleged terrorist network, the Neo-Conservatives focus inwards, searching unsuccessfully for terrorist sleeper cells in America. They then extend the war on “terror” to a war against general perceived evils with the invasion of Iraq in 2003. The ideas and tactics also spread to the United Kingdom where Tony Blair uses the threat of terrorism to give him a new moral authority. The repercussions of the Neo-Conservative strategy are also explored with an investigation of indefinitely-detained terrorist suspects in Guantanamo Bay, many allegedly taken on the word of the anti-Taliban Northern Alliance without actual investigation on the part of the United States military, and other forms of “pre-emption” against non-existent and unlikely threats made simply on the grounds that the parties involved could later become a threat…


Pt 2 of the Little Atoms Interview above is about his documentary series: All Watched Over by Machines of Loving Grace 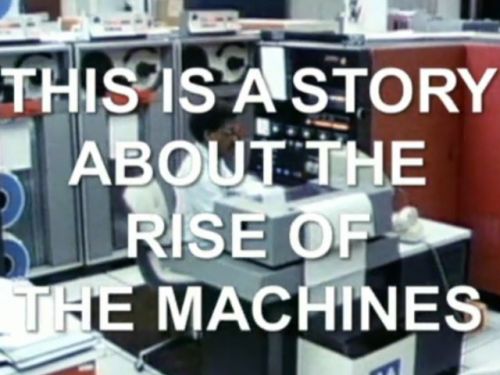 All Watched Over By Machines Of Loving Grace is a series about how humans have been colonised by the machines they have built — “Although we don’t realise it, the way we see everything in the world today is through the eyes of the computers.”

To Watch the 3 Part Series

Part one explores the dream that rose up in the 1990s that computers could create a new kind of stable world. They would bring about a new kind global capitalism free of all risk and without the boom and bust of the past. They would also abolish political power and create a new kind of democracy through the internet where millions of individuals would be connected as nodes in cybernetic systems – without hierarchy. The film tells the story of two perfect worlds. One is the small group of disciples around the novelist Ayn Rand in the 1950s. They saw themselves as a prototype for a future society where everyone could follow their own selfish desires. The other is the global utopia that digital entrepreneurs in Silicon Valley set out to create in the 1990s. Many of them were also disciples of Ayn Rand. They believed that the new computer networks would allow the creation of a society where everyone could follow their own desires, yet there would not be anarchy. They were joined by Alan Greenspan who had also been a disciple of Ayn Rand. He became convinced that the computers were creating a new kind of stable capitalism. But the dream of stability in both worlds would be torn apart by the two dynamic human forces – love and power.

Part 2 — The Use and Abuse of Vegetational Concepts

Part two shows how our modern scientific idea of nature, the self-regulating ecosystem, is actually a machine fantasy. It has little to do with the real complexity of nature. It is based on cybernetic ideas that were projected on to nature in the 1950s by ambitious scientists. A static machine theory of order that sees humans, and everything else on the planet, as components–cogs–in a system. But in an age disillusioned with politics, the self-regulating ecosystem has again become the model for utopian ideas of human “self-organising networks”, with dreams of new ways of organising societies without leaders and in global visions of connectivity like the Gaia theory. This powerful idea emerged out of the hippie communes in America in the 1960s, and from counter-culture computer scientists who believed that global webs of computers could liberate the world. But, at the very moment this was happening, the science of ecology discovered that the theory of the self-regulating ecosystem wasn’t true. Instead they found that nature was really dynamic and constantly changing in unpredictable ways. But it was too late, the dream of the self-organising network had by now captured imaginations…

This episode looks at why popular culture finds this machine vision so beguiling. The film argues it is because all political dreams of changing the world for the better seem to have failed, meaning the retreat into machine-fantasies that say we have no control over our actions because they excuse our failure. At the heart of the film is Bill Hamilton, a scientist. He argued that human behaviour is really guided by codes buried deep within us–a theory later popularised by Richard Dawkins as the “selfish gene”. It said that individual human beings are really just machines whose only job is to make sure the codes are passed on for eternity. This final part begins in 2000 in the jungles of the Congo and Rwanda, where Hamilton is to help prove his dark theories. But all around him the Congo is being torn apart. The film then interweaves the two stories–the strange roots of Hamilton’s theories, and the history of the West’s tortured relationship with the Congo and technology…