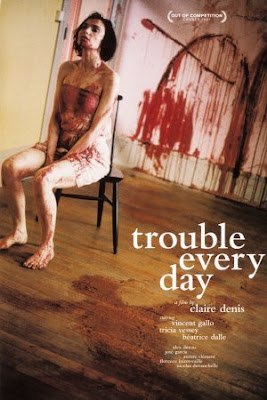 Claire Denis is one of the best directors working today, a maker of films that are poetic and cryptic, humanist and yet lacking illusions, unpretentious and yet fascinatingly artful and creatively evasive. Trouble Every Day is both a key Denis film and her most atypical work: the ugly violence and horror-movie motifs she explored in her much-discussed 2001 film stands in contrast to the fond instincts displayed in her other great films of the decade, like Friday Night (2003) and 35 Rhums (2009); some feel it was the film that gave new impetus to the visceral, but largely silly new wave of extreme Euro-horror. But Trouble Every Day takes its place in Denis’ canon with ease, not only in style, and in the multifarious ways it explore human intimacy, but also in the extension of the notion presented more tangentially in Beau Travail (1999) of the human body as both an object of fetish and warfare.

In terms of pure story breakdown, Trouble Every Day toys with the essential ideas of many late ’70s European horror films, like the works of Lucio Fulci and Ruggiero Deodato, in which interloping white westerners who have travelled into foreign lands return infected with a taint that drives them to nihilistic violence. The literal plot is, however, only presented in tangential, hinted terms, the key occurrences having occurred long in the past, and the familiar patterns of those model stories are partly inverted. Trouble Every Day, both more exactingly grotesque and personal than many undeniably but often juvenilely brutal films, is also far more attuned to its protagonists as physical and moral entities.

Denis commences with a series of what appear barely connected events that all contain the threat of horror. A young woman (Béatrice Dalle), wandering the desolate outer suburbs of Paris, eyes a truck driver with evident sexual interest, and he responds; later, a motorcyclist (Alex Descas), coming across the man’s parked truck and the woman’s van, penetrates the vacant lot nearby and finds the man’s mangled body and the woman dissociated and caked in blood. Simultaneously, a newly married American couple, Dr. Shane Brown (Vincent Gallo) and his bride June (Tricia Vessey), arrive in Paris for their honeymoon, but only after Shane has locked himself in the plane toilet and had a panic attack whilst conjuring visions of June drenched in blood.

Denis’ peculiar, eliding film grammar, alive to the minatory pleasures found in the focused tranquility of a commute home from work, or the cigarette break when at one’s job, meshes here with her bizarre story to create a rare texture. The long prologue, consisting of decorous dissolves between shots of Paris at sunset, romantic and yet dark, sonorous, to the music of The Tindersticks (their soundtrack is generally admired, and rightly so), remakes Denis’ Paris as a depopulated, drowsy, faintly forbidding place, and much of the rest of the film is shot either early in the morning or in the late evening. Her purpose, to both evoke and undermine the romantic glaze of the city as one for lovers, is slow to congeal, but ineffaceable once done. Gallo’s own debt to what he learnt (or mislearnt, as some might have it, from Denis) for his own The Brown Bunny (2003) is evident in how he tried to counterpoint textures of grief, expressed in lingering images of ceaseless travel, with grossly intimate physicality and brutal discoveries.

To Read the Rest of the Response
Posted by Michael at 3:16 AM