For all the degradations Deneuve endures in these movies, it's worth remembering that in the first decade of her nearly 50-year career, she became famous by starring in films that were either captivating debasements or wholesome fantasias (and sometimes a mixture of the two). But in an oeuvre that encompasses more than 100 films, Deneuve can hardly be limited to Catherine the pure or Catherine the perverted. At times she's superseded mere celebrity and stood in for an entire nation: From 1985-89, her visage was used for Marianne, the national symbol of France. Shortly after, in 1992, she starred as a grande dame colonialist in Régis Wargnier's 1992 historical melodrama Indochine, the only role for which Deneuve has been nominated for an Academy Award. And yet Deneuve, born in 1943, has refused to calcify. Since Indochine, she has shown a fearlessness in her roles—no matter how small, as witnessed by her highly memorable motorcycle mama in Leos Carax's Pola X (1999) and her imperturbable hospital psychiatrist in Desplechin's Kings and Queen (2004).

Then again, that temerity existed from the start. Repulsion (1965), Deneuve's first English-language film, came out only a year after her breakout role as Geneviève, the melancholic jeune fille in Jacques Demy's lollipop-hued, entirely sung melodrama, The Umbrellas of Cherbourg. While certainly somber (some have likened Demy's film to a musical about the Algerian War), Umbrellas is far sunnier than Roman Polanski's horror show, which begins with an extremely tight close-up of Deneuve—several shots of her eyeball, her pupil dominating the entire screen. Despite the camera's proximity, Deneuve, the height of inscrutable blankness, remains remarkably distant—a damaged beauty hiding under a mane of luxuriant blond hair, her delicate, accented English rarely registering above a whisper. Plummeting into psychosis, she becomes glacially catatonic; her character, Carole, spends hours staring motionless at a crack in a sidewalk. Soon she's gazing at a slowly putrefying rabbit carcass; next she's seeing menacing shadows outside her bedroom door. Then viewers see Carole being raped—a violation that may be real or imagined.

In the recently published English translation of The Private Diaries of Catherine Deneuve Close Up and Personal (Pegasus Books), screenwriter Pascal Bonitzer asks the actress if she was "freaked out" by the role of Carole. "Absolutely not, I thought it was fantastic, I was very pleased," she responds. Her unflappable commitment to roles in which she is debauched must have been helpful when shooting Luis Buñuel's Belle de Jour (1967)—which, notably, was released in France less than three months after Demy's radiant, MGM-inspired musical The Young Girls of Rochefort, starring Deneuve and her real-life sister Françoise Dorléac, who died shortly after Rochefort opened. In Belle de Jour, Deneuve is Séverine, a deeply disenchanted Parisian housewife frequently trussed up and mussed up while sporting the smartest Yves Saint Laurent finery. She emits frost: "I feel this coldness from you," laments Pierre (Jean Sorel), her doting doctor husband. In an unconsummated marriage, Séverine finds liberation through byzantine psychosexual fantasies—and the 2 to 5 shift at a brothel. As in Repulsion, there are fleeting flashbacks to childhood trauma. Yet in Buñuel's film, these scenes are almost non sequiturs, presented not as psychological "explanation" but as blips in a baroque sexual surrealism. Bondage, defilement, debasement: Séverine revels in it all.

Deneuve, however, did not. "I felt they showed more of me than they'd said they were going to," she tells Bonitzer. "There were moments when I felt totally used." Yet that didn't stop her from starring three years later in Buñuel's equally bizarre Tristana, in which she plays a motherless innocent lusted after by a well-respected gentlemen (Deneuve's diary entry from October 4, 1969, while filming Tristana: "Have to toss my underwear on to my artificial leg lying on the bed, and it's a real challenge making the lace fall exactly on the shoed foot"). Curiously, eight months after Tristana's release in France, Demy's Donkey Skin—his third musical with Deneuve—came out. Based on a popular 17th-century fable by Charles Perrault, Donkey Skin has psychosexual perversions worthy of Buñuel: As the Queen (a brunette Deneuve) lies on her deathbed, her grieving king (Jean Marais) promises he will remarry only if he finds a princess more beautiful than she. And who could be more fetching than a dark-haired Deneuve? A blonde Catherine, of course, the demure royal daughter who's baffled by Dad's planned nuptials. Soon she's on the lam as a sullied, smelly scullion draped in an ass's pelt.

Just as significant as her work onscreen is Deneuve's unassailable role as sapphic idol. Although same-sex titillation is hinted at in Belle de Jour, Deneuve's status as lesbian icon was indelibly cemented with Tony Scott's The Hunger (1983), in which her vampiress, Miriam Blaylock, seduces a sweat-soaked Susan Sarandon. In André Téchiné's Thieves (1996), Deneuve is a whiskey-swilling philosophy prof shown enjoying some bathtub splashing with her decades-younger girlfriend (soft butch Laurence Côte). François Ozon, in 8 Women (2002), staged a memorable tussle and smooch between Deneuve and Fanny Ardant, the two actresses linked offscreen by their respective films and romances with François Truffaut. A San Francisco–based lesbian magazine was once called Deneuve until a trademark dispute with the actress (who was hawking her own line of perfume with her surname) led to a title change to Curve in 1995. 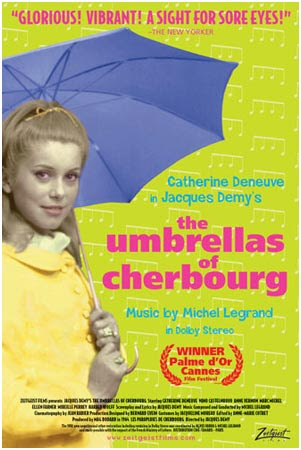 Posted by Michael Benton at 1:53 PM