(From 2008, very interesting in the context of recent events...)

British Petroleum, Beyond Petroleum . . . Biofuel Promoter, Biosphere Plunderer. Regardless of what the BP abbreviation actually stands for, one thing is clear: this oil giant knows a good deal when it sees one. For a relatively small financial contribution, BP appropriates academic expertise from a leading public research institution, founded on 200 years of social support, to maximize its return on energy investments. These investments, in turn, are focused primarily on promoting the market for biofuel, the newest darling of those in power who stimulate change while maintaining "business as usual." This means working-class people in the core developed countries will subsidize the extraction of even more ecological goods from the developing world to serve elites, who never mind taking food out of the mouths of people to put gold in their pockets. Socializing the costs for private economic gain is not a new phenomenon in the capitalist system. However, this case represents a new twist in the combination of debunked science, ecological imperialism, and the sophistry of "sustainable development."

In February 2007, BP announced plans with the University of California (UC) at Berkeley, in partnership with the University of Illinois and the Lawrence Berkeley National Laboratory, to lead the largest academic-industry research alliance in U.S. history. The $50 million-a-year bone that BP will throw to Berkeley will create the Energy Biosciences Institute (EBI), primarily focusing its research on biotechnology to produce biofuels. "In launching this visionary institute, BP is creating a new model for university-industry collaboration," said Beth Burnside, UC Berkeley Vice Chancellor for Research (quoted in Sanders 2007). In light of the historic record of capitalist accumulation, this "new model" for university-industry collaboration looks like old wine in a new bottle: appropriate a social good (public university), privatize the property (intellectual development), and commodify the output (energy-intensive products). And in this instance, BP has recruited a public institution to be its profit-making subsidiary.

This is not the first time UC Berkeley fed at the corporate trough, and as government expenditures for social goods continue to decline relatively, it is likely that it won't be the last. Berkeley entered into a research deal with the seed giant Novartis ten years ago, after which an external review of the UCB-Novartis interaction recommended avoiding such partnerships (Altieri and Holt-Gimenez 2007). Nevertheless, on November 15, 2007, BP, the UC Berkeley, the Lawrence Berkeley National Laboratory, and the University of Illinois at Urbana-Champaign announced the signing of a controversial ten-year pact forming the Energy Biosciences Institute. The current deal with BP is ten times larger than the Novartis deal. A brief description of this BP partnership follows:

As part of its continuing drive to find longer term commercial alternatives to oil and gas, BP announced in 2006 that it would invest $500 million over the next 10 years to establish the institute, the first public-private institution of this scale in the world. The institute's emphasis on new fuels meshes with UC Berkeley's and Berkeley Lab's research aims to develop sustainable sources of energy and the University of Illinois' efforts to develop biofuel feedstocks. The three academic institutions formed a strategic partnership to submit to BP a proposal that was selected in February 2007 from among five international proposals. (Burress 2007)

As details of the final contract came to light, the public learned of how BP will gain profit-making technology and expertise by externalizing much of the cost of research and development. The benefits to BP include access to leading scientists and laboratories, first rights for patent negotiations, and the rubber stamp of academia and science on its new projects. The benefit for the university is purely financial, though at least one third of the money goes to BP's own private projects on campus. The benefit for the public is hard to find. Politicians, university officials, and pro-market pundits laud this public-private partnership, while those critical of the "prostitution" of the university, including experts on biofuels' social and environmental impacts, are marginalized. This is not surprising given the undemocratic nature of the process whereby the details of the deal were negotiated without any public input.

Jennifer Washburn, examining the corporate corruption of higher education, explains that the deal with BP will expand the control that private firms wield over university agendas (Washburn 2007). Indeed, as scientists Richard Levins and Richard Lewontin point out in their most recent book, Biology Under the Influence (2007), so-called public-private partnerships are on the rise, and funding, an important factor in guiding research, is increasingly determined by the needs of private industry with the backing of governments. These "partnerships" are ideologically accepted and promoted, as were the earliest land enclosures and contemporary privatization schemes, as a natural and inevitable evolution of society's institutions.1 Debates concerning the cultural, political, and technological viability of market-based solutions to environmental and social problems are directly influenced by how science interacts with dominant ideology to mold and reinforce decisions that affect the world. The seemingly natural process of the degrading trends of capitalist development must be confronted.

No Free Lunch in Crop-Based Biofuels

Like the Aesopian rhetoric used under capitalism to promote war and imperialism in the name of democracy, the way in which the 10-year plan to "research" (aka promote) biofuels blatantly dismisses potential ecological damage is unsettling. There is no evidence that biofuels can actually satisfy the energy appetite of capitalism -- they have so far only helped to destroy both ecological and social relationships. This critique does not only come from those who suffer the immediate consequences of biofuels' advance, but also from ecologists within UC Berkeley's ivory walls. Dr. Miguel Altieri, agroecologist, explains:

By promoting large-scale mechanized monocultures which require agrochemical inputs and machinery, and as carbon-capturing forests are felled to make way for biofuel crops, CO2 emissions will increase not decrease. The only way to stop global warming is to promote small-scale organic agriculture and decrease the use of all fuels, which requires major reductions in consumption patterns and development of massive public transportation systems, areas that the University of California should be actively researching and that BP and the other biofuel partners will never invest one penny towards. (Altieri 2007) 2

The damages from biofuel production are growing. For instance, a recent UNEP/UNESCO report projects the loss of 98% of Indonesia's forests by 2022, due in large part to land cleared for plantations of palm trees to produce biofuel (Nellemann and Virtue 2007: 6). Indonesia is home to one of the largest rain forests in the world and a repository of a great deal of the world's biodiversity. Along with deforestation, habitat destruction, decreased biodiversity, and increased industrial mono-cropping and agricultural inputs (including fertilizer, herbicide, genetically modified seed, and water), we see the removal of sensitive lands from conservation programs and more water pollution.

So, BP-Berkeley project's claim of ecological concern raises many questions.3 Not least is BP's own track record of environmental destruction. And "alternative" fuel represents only the most publicly discussed venture of the new institute. Other research endeavors include: "the conversion of heavy hydrocarbons to clean fuels, improved recovery from existing oil and gas reservoirs and carbon sequestration" (Brenneman 2007). Given this research agenda, it is easy to see why environmentalists, farmers, and other critics around the world understand that the main thing "green" coming out of the EBI will be money.

To Read the rest of the Essay

Yves Smith: "On BP’s Many Forms of Less Than Artful Dodging." 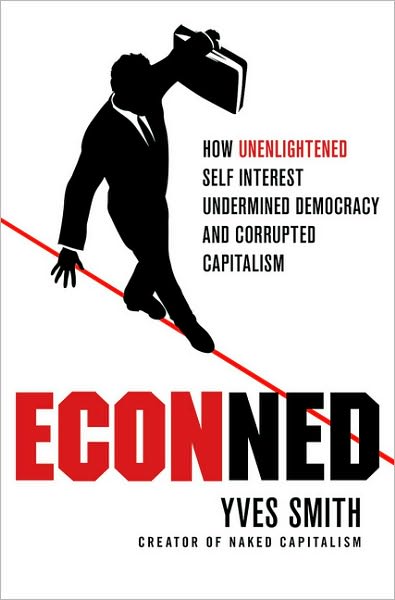 Posted by Michael Benton at 1:14 AM