Michael Atkinson: Storytelling -- Why Alain Resnais's Wild Grass is the secret key to his sensibility

Storytelling: Why Alain Resnais's Wild Grass is the secret key to his sensibility
by Michael Atkinson
Moving Image Source 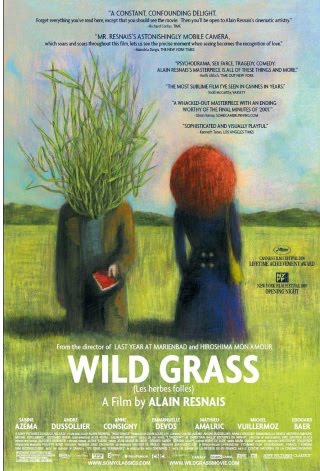 What’s going on? Most of the film is overtaken with Georges’s life as it is—uneventful and unbothered by work—and as it is disrupted, mildly and then radically, by his dogged pursuit of Marguerite, for reasons unclear. He stalks her, phones her, leaves messages, bugs Amalric’s cop about her, and through it all his wife is strangely tolerant. But it’s that “You disappoint me” call that sends up flares: what Georges is doing is seeking story. He’s a character on the prowl for plot, desiring to make movie sense out of arbitrariness. Here, what he seems to want is the kind of fantastical emotional connection that movies and fiction often use as shortcuts to invest relationships and lives with meaning—and he doesn’t get it.

Georges’s airy, Romantic passion plays almost like a kind of Alzheimer’s—except it’s the rest of the world that won’t cohere into a genre construction, not his inability to recall or grasp connections. (“Nobody ever dies from reading,” the narrator offhandedly remarks at one point. “Reading helps us live.”) He’s a modern Scheherazade, fending off mortality with the erection of fictions (except he is both the yarn-spinner and the king). Eventually, the lust for narrative drives Georges to slash Marguerite’s car tires, thereby genuinely involving the police and launching a new story arc Georges didn’t anticipate.

From there the movie goes quietly nuts, scrambling genres (the end credits change genre-signaling styles five times), tossing grand romantic gestures, suffering the characters as they hesitantly try to figure out what they’re supposed to do in the story Georges has in his head, a fictional schema the movie finally succumbs to, after a lot of flirting. It’s the only romantic comedy ever made in which only its hero is aware of the brand, and the other characters often resist it. When Marguerite tells Georges to bring his wife along for a flight—a situation he and we can easily imagine as an amorous movie turning point without the wife—Georges is furious, as if she’d gone completely off script.

It’s a singularly enlarging, inspiring idea—how meaning in life can be found within story, and how story is memory and how it is in fact all we have, whether the stories be cinematic formulas like those that Georges harbors, or something completely different, waves and particles of experience that, however they’re shaped, make up our histories. Suddenly, all of Resnais crystallizes around a single, poignant, frankly lovable conceit: the pursuit of story as a way to understand living. The zombies in Last Year in Marienbad are the most woeful practitioners of Resnais’s thesis, memory-impaired and helplessly failing to arrange a meaningful narrative for their lives. The lovers in Hiroshima, mon amour, the war-haunted Parisians of Muriel (1963), the windblown leaf of a time traveler in Je t’aime, je t’aime (1968), the sociology professor in Mon Oncle d’Amérique, the couples in Mélo (1986), and so on. Resnais’s people are all contrivers of meaning, tale-tellers compelled like Beckett’s ghosts to build and rebuild the scaffolding of memory and history as a way of insisting on their own significance.

To Read the Entire Essay
Posted by Michael at 10:05 PM