How corporate tax breaks hurt humanity. Truth be told: taxation is only certain for the ordinary law-abiding citizen, the non-rich
By Joan Baxter
Rabble (Canada) 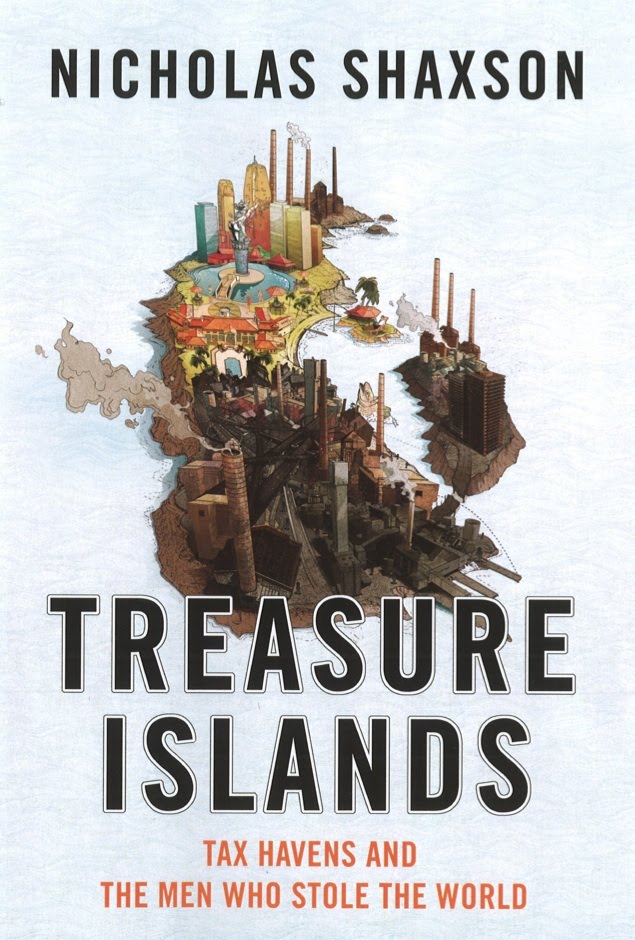 Benjamin Franklin once wrote that nothing is certain in this world except death and taxes. That was in 1789. Mr. Franklin might be surprised to learn that today his axiom no longer holds, at least not for the rich and powerful among us. Truth be told -- as it is in British investigative journalist and author Nicholas Shaxson's meticulously researched and riveting book, Treasure Islands: Tax Havens and the Men Who Stole the World -- taxation is only certain for the ordinary law-abiding citizen, the non-rich. The wealthy and the ultra-wealthy can quite easily get by paying little or even no tax, thanks to the shadowy spider webs of tax havens and secrecy jurisdictions that span the globe.

Shaxson's aims in the book, he says, are to challenge the common idea that it is acceptable for a place to get rich by undermining the laws of other places and to offer a lens through which to view the history of the modern world. "Offshore business," he writes, "is, at heart, about artificially manipulating paper trails of money across borders." It is not a "colourful outgrowth of the global economy, but instead lies right at its centre." It's not about efficiency or any genuine production or real economic growth -- it's about people and corporations making vast amounts of money through tax evasion.

This book is a jaw-dropper of an exposé of how the moneyed elites use offshore to hide and grow their wealth and of how this affects the rest of humanity. Shaxson travels the world and delves into archives and financial reports to offer up some mind-boggling facts and figures. More than half of world trade passes, at least on paper, through tax havens. The balance sheets of small island finance centres alone add up to 18 trillion dollars, about a third of the world's GDP -- and that is probably an underestimate. Wealthy individuals hold over 11.5 trillion dollars offshore. That's about one quarter of the world's wealth.

It seems that just about everyone who is anybody is in on the act. Media baron Rupert Murdoch's News Corporation (which owns Fox News, HarperCollins, MySpace and Sun newspapers), for example, uses 152 offshore subsidiaries and so pays an estimated rock bottom six per cent tax rate. Even Bono, writes Shaxson, who "browbeats western taxpayers to boost aid to Africa, shifted his band's financial empire to the Netherlands [an important European tax haven] in 2006 to cut its tax bill." Eighty-three of the U.S.'s 100 biggest corporations have subsidiaries in tax havens. The Tax Justice Network, an organization that works to research and raise awareness of the secretive world of offshore finance, discovered that 99 per cent of Europe's hundred largest companies used offshore subsidiaries, and the largest users of those were banks.

Shaxson takes an extremely complex issue, how vast amounts of money are shifted into tax havens or secrecy jurisdictions where no one can tell who really owns the shell banks and corporations, and renders it all comprehensible, with lively, precise and sometimes very witty prose. It can be agitating reading about how multinationals, banks and the global oligarchy (including not just despots who have robbed their own countries but also some of the world's most respected and prominent citizens) use the offshore system to hide their wealth to avoid paying their share of taxes, which our governments, our schools, our universities, our healthcare systems, our institutions and ordinary people, so sorely need. It can be an especially disturbing read for those of us struggling right now to fill out our tax forms.

To Read the Rest of the Review Essay
Posted by Michael at 10:52 AM