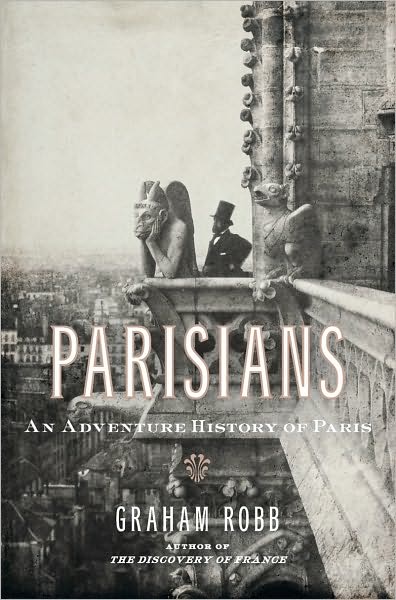 Graham Robb is making France and the French irresistible again. With an entirely unconventional gift for historically-informed tale-spinning, his Parisians delivers nearly a score of long anecdotes about famous people in real scenes beyond imagining.

Here is Hitler on a tourist sweep through depopulated boulevards of Paris at dawn on a weekend in June, 1940 — thinking out loud with Albert Speer about how the Paris effect might be reproduced in Berlin.

There are Miles Davis and the singer Juliette Greco in love in 1949, and in guileless conversations about “existentialisme” with Jean-Paul Sartre and Simone de Beauvoir at the Cafe de Flore.

Then there is the assassination attempt that Francois Mitterand stage-managed against himself in 1957 — perhaps in a sort of homage to the “miracle” that saved Charles de Gaulle from great bursts of gunfire inside the Cathedral of Notre Dame in 1944. Mitterand, who liked being known as “the Fox,” survived even the exposure of his own hoax — because, Graham Robb suggests, the French like a trickster and a touch of criminality at the top.

My favorite Robb character, from the 1830s, is the arch-criminal and escape artist Vidocq, a master of disguises who hid himself on Paris streets as a trash pile, who conspired with the cops and built the first private detective agency known to the world.

What is Graham Robb up to? In his fragmentary episodes, he seems to be telling us something of the non-linear course of events in general. His “explosive fragments,” I observe, remind me of David Shields’ ideal for the modern “lyric essay”: an explosion on every page. Yes, but no, Graham Robb rejoins:

Yes, it’s nice to have explosive fragments, but it’s also nice to just arrest the explosion at a particular moment and see exactly what’s going on at the moment of impact, the moment of destruction, and just take a lot more time to look at things which are just flashing past. It’s not a search engine kind of history. It’s almost the opposite. It’s the single fragment kind of history, and how much you can discover in one particular thing if you stop and look at it and go into it as deeply as possible, instead of skimming over the surface and collecting impressions.

Parisians extends the project of Robb’s breakthrough, The Discovery of France, the fruit of 4 years and 14,000 miles on a bicycle, in which Robb reintroduced France as, until yesterday, anything but a single, sovereign culture. He found a new planet at every bike resting spot, “a vast encyclopedia of micro-civilizations” in sum. His France is a nation of villages where, when the Eiffel Tower went up in 1889, only about 20 percent of the population spoke French. The short form of Parisians is: out with old notions of order, majesty and the grandeur of Paris; in with the ragged, the jagged, the forgotten personal perspectives, the violent and the out-and-out weird. Robb’s stress on fragmentation seems deliberately set against the national impulse in President Sarkozy’s politics — against Sarko’s famous contempt for the riotous, car-burning brown-skinned racaille, or scum, of Paris’s near suburbs.

It’s a bit ironic that Sarkozy started a debate on a national identity, because he is stressing the rifts that there are in French and Parisian society. He’s a very Parisian president. The biggest rift in France is between Paris and the provinces…. And there is also the rift between bourgeois Paris, white Paris and so-called immigrant Paris which very often isn’t immigrant at all, they’re French too. Sarkozy’s exploited that old fear that probably goes way back to the time of the Gauls… It’s the fear of what lies beyond in the hinterland, and that fear is more virulent than ever in Paris. And even today, if you tell some Parisians that you’ve been to Clichy-sous-Bois or one of the other northern suburbs, they won’t believe you. They won’t believe that you can go there and talk to people and come back alive.

To Listen to the Coversation
Posted by Michael at 8:08 PM