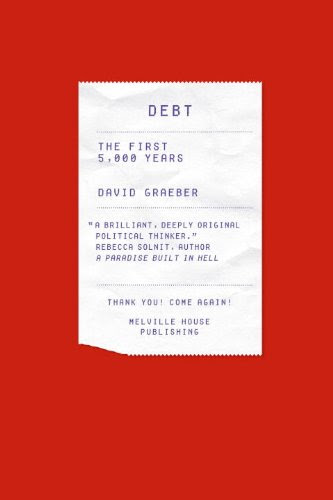 Anthropologist David Graeber argues that it is only with a general historical understanding of debt and its relationship to violence that we can begin to appreciate our emerging epoch. Here he begins to fill in our historical knowledge gap

What follows is a fragment of a much larger project of research on debt and debt money in human history. The first and overwhelming conclusion of this project is that in studying economic history, we tend to systematically ignore the role of violence, the absolutely central role of war and slavery in creating and shaping the basic institutions of what we now call ‘the economy'. What's more, origins matter. The violence may be invisible, but it remains inscribed in the very logic of our economic common sense, in the apparently self-evident nature of institutions that simply would never and could never exist outside of the monopoly of violence - but also, the systematic threat of violence - maintained by the contemporary state.

Let me start with the institution of slavery, whose role, I think, is key. In most times and places, slavery is seen as a consequence of war. Sometimes most slaves actually are war captives, sometimes they are not, but almost invariably, war is seen as the foundation and justification of the institution. If you surrender in war, what you surrender is your life; your conqueror has the right to kill you, and often will. If he chooses not to, you literally owe your life to him; a debt conceived as absolute, infinite, irredeemable. He can in principle extract anything he wants, and all debts - obligations - you may owe to others (your friends, family, former political allegiances), or that others owe you, are seen as being absolutely negated. Your debt to your owner is all that now exists.

This sort of logic has at least two very interesting consequences, though they might be said to pull in rather contrary directions. First of all, as we all know, it is another typical - perhaps defining - feature of slavery that slaves can be bought or sold. In this case, absolute debt becomes (in another context, that of the market) no longer absolute. In fact, it can be precisely quantified. There is good reason to believe that it was just this operation that made it possible to create something like our contemporary form of money to begin with, since what anthropologists used to refer to as ‘primitive money', the kind that one finds in stateless societies (Solomon Island feather money, Iroquois wampum), was mostly used to arrange marriages, resolve blood feuds, and fiddle with other sorts of relations between people, rather than to buy and sell commodities. For instance, if slavery is debt, then debt can lead to slavery. A Babylonian peasant might have paid a handy sum in silver to his wife's parents to officialise the marriage, but he in no sense owned her. He certainly couldn't buy or sell the mother of his children. But all that would change if he took out a loan. Were he to default, his creditors could first remove his sheep and furniture, then his house, fields and orchards, and finally take his wife, children, and even himself as debt peons until the matter was settled (which, as his resources vanished, of course became increasingly difficult to do). Debt was the hinge that made it possible to imagine money in anything like the modern sense, and therefore, also, to produce what we like to call the market: an arena where anything can be bought and sold, because all objects are (like slaves) disembedded from their former social relations and exist only in relation to money.

But at the same time the logic of debt as conquest can, as I mentioned, pull another way. Kings, throughout history, tend to be profoundly ambivalent towards allowing the logic of debt to get completely out of hand. This is not because they are hostile to markets. On the contrary, they normally encourage them, for the simple reason that governments find it inconvenient to levy everything they need (silks, chariot wheels, flamingo tongues, lapis lazuli) directly from their subject population; it's much easier to encourage markets and then buy them. Early markets often followed armies or royal entourages, or formed near palaces or at the fringes of military posts. This actually helps explain the rather puzzling behavior on the part of royal courts: after all, since kings usually controlled the gold and silver mines, what exactly was the point of stamping bits of the stuff with your face on it, dumping it on the civilian population, and then demanding they give it back to you again as taxes? It only makes sense if levying taxes was really a way to force everyone to acquire coins, so as to facilitate the rise of markets, since markets were convenient to have around. However, for our present purposes, the critical question is: how were these taxes justified? Why did subjects owe them, what debt were they discharging when they were paid? Here we return again to right of conquest. (Actually, in the ancient world, free citizens - whether in Mesopotamia, Greece, or Rome - often did not have to pay direct taxes for this very reason, but obviously I'm simplifying here.) If kings claimed to hold the power of life and death over their subjects by right of conquest, then their subjects' debts were, also, ultimately infinite; and also, at least in that context, their relations to one another, what they owed to one another, was unimportant. All that really existed was their relation to the king. This in turn explains why kings and emperors invariably tried to regulate the powers that masters had over slaves, and creditors over debtors. At the very least they would always insist, if they had the power, that those prisoners who had already had their lives spared could no longer be killed by their masters. In fact, only rulers could have arbitrary power over life and death. One's ultimate debt was to the state; it was the only one that was truly unlimited, that could make absolute, cosmic, claims.

The reason I stress this is because this logic is still with us. When we speak of a ‘society' (French society, Jamaican society) we are really speaking of people organised by a single nation state. That is the tacit model, anyway. ‘Societies' are really states, the logic of states is that of conquest, the logic of conquest is ultimately identical to that of slavery. True, in the hands of state apologists, this becomes transformed into a notion of a more benevolent ‘social debt'. Here there is a little story told, a kind of myth. We are all born with an infinite debt to the society that raised, nurtured, fed and clothed us, to those long dead who invented our language and traditions, to all those who made it possible for us to exist. In ancient times we thought we owed this to the gods (it was repaid in sacrifice, or, sacrifice was really just the payment of interest - ultimately, it was repaid by death). Later the debt was adopted by the state, itself a divine institution, with taxes substituted for sacrifice, and military service for one's debt of life. Money is simply the concrete form of this social debt, the way that it is managed. Keynesians like this sort of logic. So do various strains of socialist, social democrats, even crypto-fascists like Auguste Comte (the first, as far as I am aware, to actually coin the phrase ‘social debt'). But the logic also runs through much of our common sense: consider for instance, the phrase, ‘to pay one's debt to society', or, ‘I felt I owed something to my country', or, ‘I wanted to give something back.' Always, in such cases, mutual rights and obligations, mutual commitments - the kind of relations that genuinely free people could make with one another - tend to be subsumed into a conception of ‘society' where we are all equal only as absolute debtors before the (now invisible) figure of the king, who stands in for your mother, and by extension, humanity.

What I am suggesting, then, is that while the claims of the impersonal market and the claims of ‘society' are often juxtaposed - and certainly have had a tendency to jockey back and forth in all sorts of practical ways - they are both ultimately founded on a very similar logic of violence. Neither is this a mere matter of historical origins that can be brushed away as inconsequential: neither states nor markets can exist without the constant threat of force.

To read the rest of the essay
Posted by Michael Benton at 10:25 PM