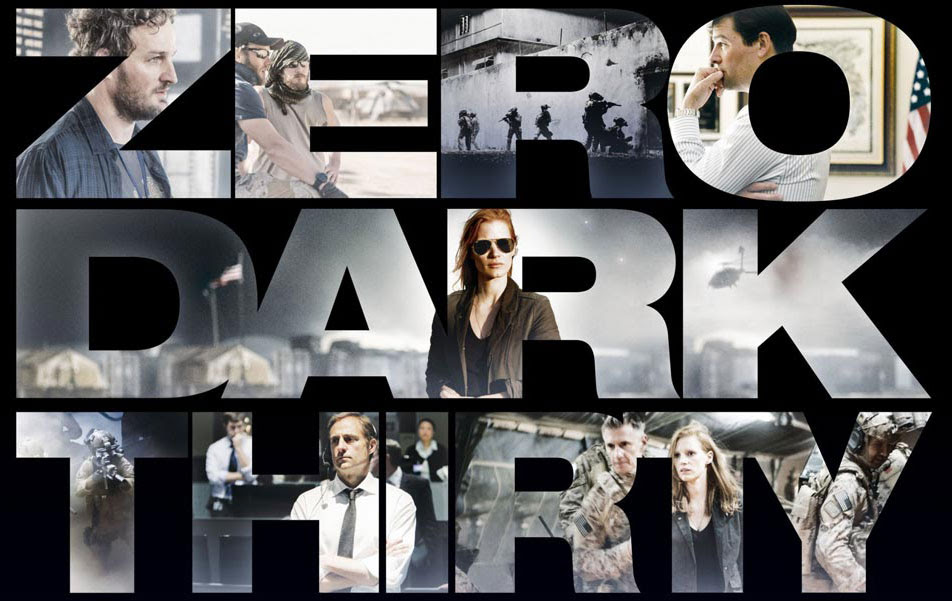 There's no way to watch Zero Dark Thirty without seeing it as a movie about how torture helped us catch Osama bin Laden. That's why I was blown away when I read this morning that Bigelow is now going with a line that "depiction is not endorsement," that simply showing torture does not amount to publicly approving of it.

If Bigelow really means that, I have a rhetorical question for her: Are audiences not supposed to cheer at the end of the film, when we get bin Laden? They cheered in the theater where I watched it. And is Maya a good character or a bad character? Did she cross some dark line in victory like Michael Corrleone, did she lose her moral self and her humanity chasing her goal like Captain Ahab, or is she just a modern-day Sherlock Holmes (or, hell, John McClane) getting his man in the end?

It seemed to me more the latter than anything else. I barely caught a whiff of a "moral journey/descent" storyline in this film - the closest they came to that was in the first scene, where Maya looks a little grossed out by Clarke's methods. A few minutes later, though, she's all street and everything, wearing a hijab and getting some henchman to throw fists at her suspects on command. She went from queasy to hardass in about ten seconds and we didn't linger on the transformation at all.

Bigelow is such a great storyteller that she has to know, deep inside, that the "depiction is not endorsement" line doesn't wash. You want audiences gripped to the screen, you've gotta give them something to root for, or against. This was definitely not a movie about two vicious and murderous groups of people killing and torturing each other in an endless cycle of increasingly brainless revenge. And this was not a movie about how America lost its values en route to a great strategic victory.

No, this was a straight-up "hero catches bad guys" movie, and the idea that audiences weren't supposed to identify with Maya the torturer is ludicrous. Are we really to believe that viewers aren't supposed to be shimmering in anticipation for her at the end, as she paces back and forth with set-fans whooshing back her beautiful red hair, waiting for her copter to come in? They might as well have put a cape and a Wonder Woman costume on her, that's how subtle that was.

Bigelow and screenwriter Mark Boal clearly spent a lot of time with sources in the CIA who were peddling a version of history where the "Enhanced Interrogation Techniques" program, though distasteful, scored us the big prize in the end.

In Oscar-winning director Alex Gibney's agonizing and affecting documentary about EIT called Taxi to the Dark Side, he talks about the phenomenon of "force drift" in torture, when interrogators start using harsher methods when the permitted ones don't work. Well, in journalism, what happened with Boal and Bigelow is what you might call "access drift" - when you really, really love the drama of the story you're hearing, you start leaning in the direction of your sources even if the truth doesn't quite cooperate.

Obviously, torture does produce some information, maybe even some good information. If you really squint hard, it may very well be that, technically speaking, there's a lot of truth in the plot of Zero Dark Thirty. It may be that we wouldn't have found bin Laden without torture. And as such, any movie about the hunt for bin Laden that excluded scenes of torture would have been dishonest.

But that's not what's messed up about this movie. The problem had nothing to do with the fact that Bigelow showed torture. It was the way she depicted it - without perspective, and in the context of a pulse-pounding thriller where the audience is clearly supposed to root for the big treasure find.

For one thing, Gibney put out a compelling argument in a Huffington Post piece that the ZD30 storyline is not accurate in the sense that it excluded crucial information. He points to several facts that Bigelow and Boal chose to ignore (and remember, this was supposed to be a "journalistic account," according to Bigelow), like for instance:

Mohammed Al-Qatani, the so-called "20th hijacker," who may have been some part of the inspiration for the "Ammar" character who was tortured in the opening scene, might have been the first detainee to mention the name of bin Laden's courier. But as Gibney points out, al-Qatani gave that information up to the FBI, in legit, torture-free interrogations, before he was whisked away to Gitmo for 49 days of torture that included such insanities as forcing him to urinate on himself (by force-feeding him liquids while in restraints), making him watch a puppet show of him and bin Laden having sex, making him take dance lessons, making him wear panties on his head, and making him wear a "smiley-face" mask, along with the usual sleep and sensory deprivation, arm-hanging, etc. In other words, the key info may have come before they chucked our supposed standards for human decency.

The CIA waterboarded Khalid Sheikh Mohammed 183 times, and throughout this "enhanced interrogation," the former al-Qaeda mastermind continually played down the importance of Abu Ahmed al-Kuwaiti, the man who led the CIA to bin Laden. But the CIA was so sure KSM was telling the truth under torture - so sure waterboarding was a "magic bullet," as Gibney put it to me - that they discounted the lead. So torture may have actually delayed bin Laden's capture.

The CIA took another detainee, Ibn al-Sheik al Libi, and duct-taped his head, put him in a wooden box, shipped him off to Cairo to be waterboarded, and got him to admit under torture that there were links between Saddam Hussein and bin Laden. This "intel" became part of Colin Powell's presentation to the U.N. on the need to invade Iraq. So while torture might have found us bin Laden, maybe, it also very well might have sent us on one of history's all-time pointlessly bloody wild goose chases, invading Iraq in search of WMDs.

A more accurate movie about the torture program would have been a grotesque comedy that showed grown men resorting to puppet shows and dance routines and fourth-rate sexual indignities dreamed up after spending too much time reading spank mags and BDSM sites - and doing this thousands of times to thousands of people, all over the world, "accidentally" murdering hundreds of people in the process, going to war by mistake at least once as a result of it, and having no clue half the time who they're interrogating (less than 10 percent of "terror suspects" at places like Bagram were arrested by American forces; most of the rest were brought in by Afghanis or other foreigners in exchange for bounties).

To Read the Entire Response

Posted by Michael Benton at 9:44 AM