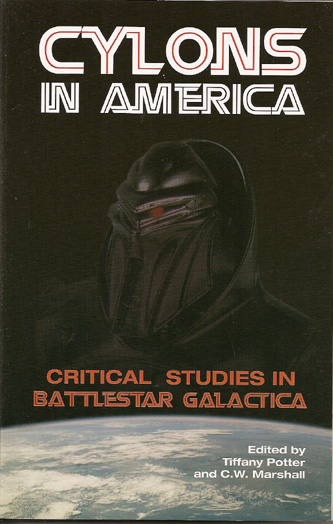 Battlestar Galactica (BSG), the Sci-Fi Channel series currently airing the second half of its fourth and final season, is a brilliant, maddening, quirky, exasperating, enigmatic, dubious series. A re-imagining of a silly but oddly beloved ABC television series of the 1970s, the new BSG takes the pre-existing mythology to daringly unusual places. Human beings of the future or the distant past created robots, the Cylons, to serve them. The Cylons rose up and made war against their creators, decimating nearly the entire human population in the war that commences the new series' narrative.

Religious fervor is one of its surprising innovations. Polytheistic, the humans worship the gods of the Ancient Greeks. In contrast, the Cylons are monotheistic, worshipping the “one true God”; their campaign against the humans is a form of jihad. Fascinatingly, the Cylons of this series have “evolved” from the clanking, immense red-beam-eyed metal robots of the original series into lushly fleshy human-looking beings. These human-like Cylons, “skin jobs” as the Colonial (human) Fleet call them, provide the most fascinating aspects of the current BSG. In their uncanny resemblance to human beings and mysterious passions, these Cylons excite the science-fiction imagination, taking the genre to exciting new places. If only the human beings were half as interesting.

I am aware of the immense cult following the series has generated, and I am in awe of many of its achievements. It’s well-acted and often dazzlingly well-written, with one daringly imaginative new concept and plot twist after another. But for all its brilliance, BSG also seems to me a highly suspect series. And for all the hoopla, BSG’s success is, at best, a limited one, given that has lasted for precisely as many seasons as the last, disastrous Star Trek series, Enterprise. The interest sparked by the series has derived as much from timing as it does from the series’ own strengths. Emerging in the wake of September 11th, the series reflects a new sci-fi grittiness that is as determined by the changed political and social landscape of the post-9/11 era as it is by innovative approaches. Precisely what garners the series so much praise — its engagement with current hot-button moral issues such as terrorism and abortion and its ideological “complexity” — is also what makes it a difficult series towards which to maintain a position. The series goes through so many permutations of its premise and of its own moral sensibility that after a time we wonder what, if anything, it’s ultimately trying to say.

Luckily, we have a lively new collection of readings as a guide to this maddeningly enigmatic series. Cylons in America: Critical Readings of Battlestar Galactica, edited by Tiffany Potter and C.W. Marshall (Continuum, 2008), offers an intelligent and diverse array of interpretations. While some of the essays are disappointingly lackluster, several of them are first-rate, and on the whole the collection engages and impresses with the acuity of its insights. The essays are divided into three sections:

* “Life in the Fleet, American Life,” which primarily treats the series as an allegory for post-9/11 America, terrorism and torture being especially frequent topics;

* “Cylon/Human Interface,” which explores the myriad issues of identity raised by the human-like Cylons; and

* “Form and Context in Twenty-First-Century Television,” which covers topics as diverse as misogyny, music, and Nietzschean philosophy on the series.

“Television isn’t supposed to make us think like this,” the editors write of BSG’s apparently bold vision (5). “BSG forces us to rethink what we knew” (8). The editors position BSG as a series that goes places where no other ventures to. While the series indubitably innovates the sci-fi genre, it is also part of a wave of revisionist, genre-bending, genre-splicing other series on television. It is also part of a massive re-imagining of the potentialities of the television medium, which has undergone an aesthetic make-over in the past decade, which Suzanne Scott’s essay “Authorized Resistance: Is Fan Production Frakked?” touches upon. The extent to which BSG should be taken as something truly “new” is, I believe, an open question.