Claudia Springer: Taken by Muslims -- Captivity Narratives in The Lives of a Bengal Lancer and Prisoner of the Mountains

Taken by Muslims: captivity narratives in The Lives of a Bengal Lancer
and Prisoner of the Mountains
by Claudia Springer
Jump Cut

Prisoner of the Mountains does not simply reverse the terms of typical Muslim captivity narratives and naively assert that all Russians are destructive and all Chechens are kindhearted. Quite the contrary: there are trigger-happy Chechens eager to kill the two captive soldiers, and a Chechen man shoots his own son for the offense of working for the Russian police. Their violence, though, is shown in the context of their motivations, not as resulting from sadistic impulses. On the Russian side, even the Commander seems to have a change of heart and indicates that he may be ready to trade Abdoul-Mourat's son, an event that is foiled when the son tries to escape and is shot. Rather than paint a simplistic picture, the film suggests that empathy becomes possible when people learn about the realities of others' lives.

In Vanya's friendship with Dina, we see the film reject Orientalist divisiveness and replace it with what philosopher Martin Buber calls an "I and thou" relationship based on nonjudgmental respect. Vanya and Dina overcome inherited cultural myths that would make them enemies and learn to perceive each other as individuals, not symbols. This is the type of connection called for by Czech theorist Vilém Flusser, who critiques the insularity of people who identify too strongly with their homelands—their heimats—to the point that they reject foreigners and anyone with unfamiliar customs. Flusser offers as a solution to intolerance the condition of the migrant, a person who is not anchored to any one place and who "carries in his unconscious bits and pieces of the mysteries of all the heimats through which he has wandered" (14). The migrant, Flusser writes, works on "the mystery of living together with others" and poses the following challenge to all of us:

"how can I overcome the prejudices of the bits and pieces of mysteries that reside within me, and how can I break through the prejudices that are anchored in the mysteries of others, so that together with them we may create something beautiful out of something that is ugly?" (15).

Prisoner of the Mountains gives us a glimpse of two people—Vanya and Dina—who break through prejudices and briefly create something beautiful. Their friendship develops awkwardly and tentatively, initiated by curiosity and followed by small acts of generosity, leading up to her secret visits to the deep pit within which Vanya is chained after his failed attempt to escape with Sacha. In addition to lowering bread and water to him on a rope, Dina informs him of his fate, standing above him at the edge of the pit: "My brother is dead. You have one more night to live." Her elevation indicates her power over him, but their conversation reveals mutual respect, she by acknowledging that he has a right to know what lies ahead, and he by responding patiently. Their cultural differences are apparent, because her idea of being helpful originates in her beliefs about the afterlife, which are meaningless to him, but his responses, while indicating his despair, avoid undermining her. She says, "Usually they throw the enemies' bodies to the jackals. But I will bury yours." He asks her to bring the key to release him. She says, "No. I will dig a wide grave for you. And you will see the Angel of Death. I'll put my necklace in the grave as your wedding gift. Maybe your soul will find a bride in heaven." He responds with a gentle smile: "I don't think so."

Later, she does bring him the key to his leg shackle after finding it hidden in a box while the film crosscuts to her father returning to the village with his son's body in the back of a truck. Before she throws the key to Vanya, she says to him, "Don't kill any more people, promise?" Her request represents a significant shift away from her former acculturated hatred for Russians as well as an attempt to break the cycle of revenge that has trapped both sides in the conflict. She has learned through her friendship with Vanya to respect life—everyone's life. Vanya responds in kind when he refuses to leave in order to protect her from punishment. Her father, Abdoul-Mourat, finds the two of them together at the edge of the pit and sends her home after scolding her for being more concerned about Vanya than about her own dead brother. But even Abdoul-Mourat—perhaps following his daughter's example—rejects vengeance when he lets Vanya go after marching him into the mountains.

Vanya's respect for Dina extends to the film's refusal to eroticize her. Even when she dances for him, she is not objectified; her dance is grave and earnest and shot from a respectful distance. She wears a headscarf and boots and an ankle-length red dress with a dark jacket. Her dance is accompanied by wailing diegetic music from a funeral procession winding its way through the village. She and the other Chechen women—most of them weather-beaten and wearing headscarves—are frequently seen at work. It is their labor, not their sexuality, that defines them. Dina is seen working with donkeys, preparing food, cleaning up, knitting—preparing for life as a village woman—and she calmly explains her future to Vanya before she dances for him. He asks her, "Did you get married yet?" She replies, "No." He says, "I would marry you." She says, "We cannot get married. I can get married next year. We marry early here." Later, when she returns to the pit to tell Vanya that he has one more night to live, she is dressed entirely in black to show that she is in mourning for her brother but also suggesting that she is preparing to mourn for Vanya, taking on the role of his widow although they have never even exchanged a kiss. She stands above him in her black robe, embodying the Angel of Death as well as the bride she speculates he might find in the afterlife. Their union is symbolic, impossible in the world they inhabit but indicative of the connection they have made.

The film also treats the Chechen landscape, customs, and music, all initially strange and unfamiliar to the Russian captives, with respect. Perched on rocky cliffs, the village is both precarious and solid, built of stone to withstand the ferocious winds. A song sung by the village children tells of the longevity of the Chechen culture and the inability of visitors to tolerate the wind. The film was shot on location in the Russian Republic of Dagestan, neighboring Chechnya, just twenty miles from where fighting was taking place at the time. (Ironically and sadly, the region's harsh conditions proved fatal for the actor Sergei Bodrov Jr. a few years later when he returned to direct a film and was killed by an avalanche.) The music, cinematography, and editing combine to emphasize endurance. But it is all obliterated at the end with the offscreen Russian assault. Vanya's inability to conjure up the villagers in his dreams symbolizes the military attack's total erasure of their existence, eliminating their history along with their future. Instead of exalting military might—as does The Lives of a Bengal Lancer—the film raises questions about the morality of bombing raids on civilian targets as a military strategy.

The final crucial element that sets this film apart is its slow, deliberate pacing, counteracting the speed with which the Bengal Lancers engage in their adventures. Unhurried panning shots linger over the mountains and valleys and the village's worn cobblestone streets. It takes time to overcome enmity, and Prisoner of the Mountains measures time very slowly. Its choices provide a cinematic model for relinquishing Hollywood's tired anti-Muslim clichés.[2] 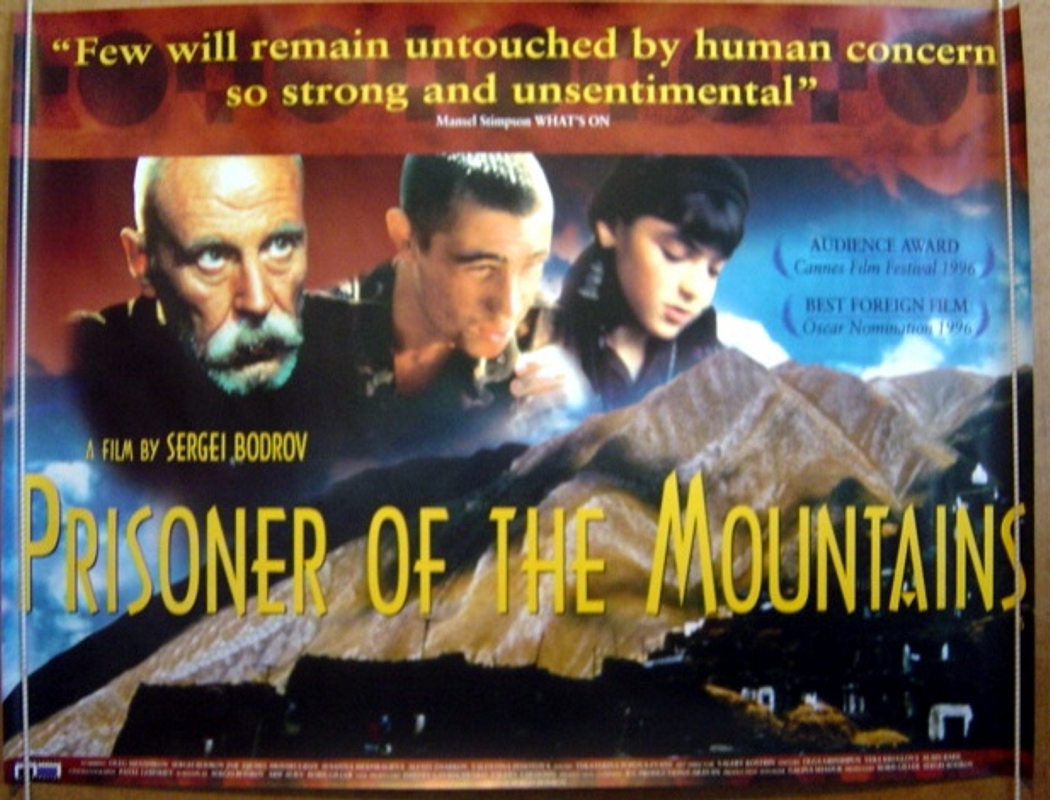