Selin Gulgoz: The Politics of Art -- Middle Eastern Women in Fiction and Film

The Politics of Art: Middle Eastern Women in Fiction and Film
By Selin Gulgoz
The Millions

The four-and-one-half-hour evening train ride from Ann Arbor, Mich., to Chicago marks the beginning of my occasional, brief getaways. I’ve devised my own routine: as soon as the conductor checks my ticket, I head to the food car to pick up a small bottle of Cabernet and a frozen pizza — something I’d hardly eat if it were elsewhere — to accompany the film I’ve already picked out. One time, the film I had chosen was The Stoning of Soraya M. It describes the real story of an Iranian woman named Soraya, who is stoned to death as required by the rules of Shari’a, when she is (wrongfully) accused by her husband of having committed adultery. It is a powerful and moving film — less because of its cinematography, and more due to the plot.

As I watched, I could tell that the woman sitting next to me was taking sneak peaks at the film every now and then. When I finished, she told me that she found the film to be really interesting, and asked me what the title is. At times like this, I find myself caught in a dilemma — a feeling I suspect many Middle Eastern women get. On the one hand, I too am enraged and have my feminist blood boil at how cruel certain Middle Eastern practices can be toward women. Yet, on the other hand, I worry about the tendency that people may have of succumbing all too easily to culture blaming, perceiving these practices as abstract and independent of historical and global relations. I struggle with the fine balance of condemning violations of human rights without accidentally submitting to contemporary extensions of Orientalism.

I was reminded of this dilemma during Nobel Laureate Tawakkol Karman’s speech at the University of Michigan on Nov. 14. Karman is a Yemeni feminist activist who played active roles before and during the Yemeni uprising, considered part of the Arab Spring. Throughout her speech, you could see Karman’s determination to bring democracy and gender equality to Yemen emanating from her whole being. She touched upon issues like how, during President Ali Abdullah Saleh’s rule, women were trapped in their homes under the veil of religion; whereas now, they were out on the streets, not only taking part, but leading the revolution in many aspects.

In popular culture, Middle Eastern women are rarely depicted as such — willful and agentic. Instead, we see them as a category, rather than individuals, that is surrounded by inhuman (male) oppression. We often receive depictions of Middle Eastern women as submissive and helpless, forced to hide their bodies, and we hardly ever discuss their determination as individuals. Indeed, as Turkish writer Elif Şafak mentions in her TED Talk of July 2010, when Middle Eastern women in literature do not fit these descriptions, they are found not to be “Middle Eastern enough.” Thus, it might surprise some that Karman, who stood strong as she chanted her slogans of peace to the auditorium, with her hands forcefully shooting high up in the air, still chooses to wear the headscarf.

Craig Thompson’s latest graphic novel Habibi, and Denis Villeneuve’s 2010 film Incendies are two recent narratives that I’ve very much enjoyed, which endorse counter-stereotypical portrayals for their respective Middle Eastern female protagonists, Dodola and Nawal. Both Dodola and Nawal are illustrated as determined individuals, who survive through hardships unimaginable to most of us. And while both women are strong, at a closer glance, there are subtle differences in terms of the perspectives these two depictions provide on Middle Eastern women. This is seen most vividly in the relationships the two women have with their own bodies.

cover Thompson’s Habibi takes place in a country named Wanatolia (a somewhat cheesy play on the word Anatolia). Wanatolia is portrayed as a timeless Middle Eastern country characterized by a water crisis surrounding a spectacular dam, with contrasting skylines of modern skyscrapers and neglected shantytowns, ruled by its insatiable sultan, constantly on the lookout for new gems to be added to his harem.

Dodola is one of the women kidnapped by the sultan’s guards for the harem. Being part of the harem means giving up ownership of one’s own body, readying it for service of the sultan’s lustful urges; whenever and wherever they may emerge. In contrast to the plump and outright unattractive sultan, Dodola is beautiful and skinny. Yet, in spite of how attractive she may seem to others, Dodola feels a strong disconnect with her own body. This feeling of disconnect is further enhanced when she’s impregnated by the sultan with the heir of Wanatolia, and as her body begins to accumulate fat. While it seems here that Thompson has yielded to the contemporary pressures of the slim and tender female body image, there is many a reason for Dodola to feel a disconnect with her body. As a nine-year-old girl, Dodola is sold into marriage by her parents, in order to survive the drought. And at 12, her husband is murdered by thieves, and Dodola is sold into slavery. 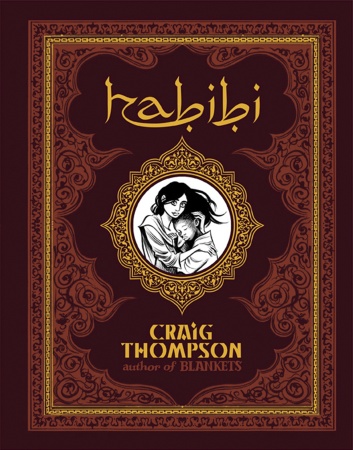 Posted by Michael Benton at 9:28 AM