Benjamin Ginsberg: The Fall Of The Faculty

The Fall of the Faculty
by Benjamin Ginsberg
Here and Now 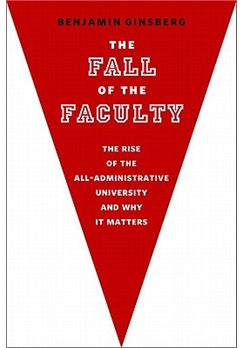 College students generally view professors as individuals who exercise a good deal of power. Members of the faculty, after all, direct the lectures, labs, studios and discussions around which academic life is organized. Professors also control the grades and recommendations that help to determine students’ graduate school and career prospects.

Students are often aware, too, that some of their professors are movers and shakers beyond the walls of the campus. Academics are visible in the worlds of science, literature, the arts, finance and, especially, politics where they serve as analysts, commentators, advisors and high-level policy makers.

But, whatever standing they may have in the eyes of undergraduates or even in the corridors of national power, most professors possess surprisingly little influence in their own schools’ decision-making processes. At most, though perhaps not all of America’s thousands of colleges and universities, the faculty has been shunted to the sidelines. Faculty members will learn about major new programs and initiatives from official announcements or from the campus newspaper. Power on campus is wielded mainly by administrators whose names and faces are seldom even recognized by students or recalled by alumni.

At most schools to be sure, faculty members control the content of their own classes and, for the most part, their own research agendas. The faculty, collectively, plays a recognized though not exclusive role in the hiring and promotion of its members. Outside these two areas, though, administrators seldom bother to consult the faculty. And, should faculty members have the temerity to offer unsolicited views, these will be more or less politely ignored. Thus, there are few schools whose faculty members have a voice in business or investment decisions. Hardly any faculties are consulted about the renovation or construction of buildings and other aspects of the school’s physical plant. Virtually everywhere, student issues, including the size of the student body, tuition, financial aid and admissions policies are controlled by administrators. At most schools, fund raising and alumni relations are administrative matters, though faculty members are often asked to entertain alumni gatherings by giving talks and presentations.

Most professors, perhaps, have only a passing interest in the university’s physical plant or its investment strategies. Particularly at research universities many faculty members normally pay little attention to their school’s undergraduate admissions policies. But, professors lack much power even in areas in which they have a strong interest, such as the appointment of senior administrators, the development of new programs and curricula, and the definition of budgetary priorities.

In consultation with their employers, these firms identify most of the candidates whom the committee will be able to meet and consider. Generally speaking, search firms rule out candidates about whom anything at all negative is said when they investigate candidates’ backgrounds. This practice introduces a marked bias in favor of the most boring and conventional candidates. And, even the constrained choice given the committee is seldom final. Search committees are generally empowered only to recommend two or three candidates for review by the president or trustees who actually make the final decision. Many schools, of course, do not bother with even the pretense of faculty participation in administrative searches. The faculty learns the name of a new president or provost when the trustees issue a press release.

Once appointed, presidents serve at the pleasure of the trustees and can only be removed by them. Other administrators serve at the pleasure of the president. Every school employs a great many administrators whom the faculty regard as foolish or incompetent. But, so long as these individuals retain the support of their administrative superiors, the faculty is usually powerless to remove them. At one school, Pennsylvania’s Albright College, the faculty were dismayed to learn in 1999 that the resume’ of their newly appointed president was filled with fraudulent claims–books never published, positions never held and so on. Yet, while the facts of the matter could not be disputed, most trustees continued to support the president for nearly five years before he finally agreed to step down. Much of the Boston University faculty loathed and feared dictatorial President John Silber during his twenty-five years in office but, given Silber’s solid base of support among powerful members of the board of trustees, faculty opposition came to naught. In a similar vein, the trustees stood by the president of West Virginia University in the face of a faculty no-confidence vote when it was revealed that the university had awarded the daughter of the state’s governor an MBA degree she had not actually earned. Conversely, faculty support will certainly not protect an administrator’s job if she or he runs afoul of the Board. In 2005, for example, Cornell’s Jeffrey Lehman, a president whose work was generally approved by the faculty, was summarily fired by the Board, apparently in the wake of a personnel dispute. The Board neither consulted with nor informed the faculty before determining that Lehman should go.

To Read the Rest of the Excerpt
Posted by Michael at 5:27 PM