Coding Freedom: The Ethics and Aesthetics of Hacking 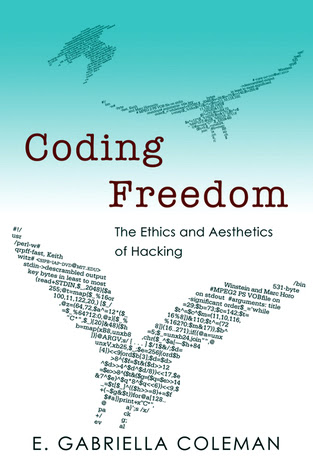 In the past 2 years, we’ve discussed in many interviews and updates, the attacks on whistle-blowers and hackers. The emerging movement of programmers, hackers, open source software, online communities has challenged and exposed corporate and government control and surveillance, making them targets of prosecution. As many may know, our own Michael Ratner has represented whistle-blower Julian Assange, computer activist Jeremy Hammond, and has been a legal adviser to many others including the late Aaron Swartz. Today we talk with author Gabriella Coleman about her recently published book Encoding Freedom: The Ethics and Aesthetics of Hacking. It’s a good place to start for those learning about the political significance of free software, intellectual property and the morality of computer hacking.

Guest – Gabriella Coleman, Wolfe Chair in Scientific and Technological Literacy in the Art History and Communication Studies Department at McGill University. Trained as an anthropologist, she researches, writes, and teaches on hackers and digital activism.

In Chris Hedges’ review he points out what Cornel West says in the film: “The state is very clever in terms of keeping track, especially [of] the courageous and visionary ones, the ones that are long-distance runners. You can keep track of them, absorb ’em, dilute ’em, or outright kill ’em—you don’t have to worry about opposition to ’em.”
Guest – Steve Vittoria, the writer, director, producer and editor of Long Distance Revolutionary: A Journey with Mumia Abu-Jamal. The film premiered in theaters in New York City earlier this month.

To Listen to the Episode
Posted by Michael Benton at 4:20 PM