Armond White: Revival of the Fittest

Revival of the Fittest
by Armond White
Criterion Collection 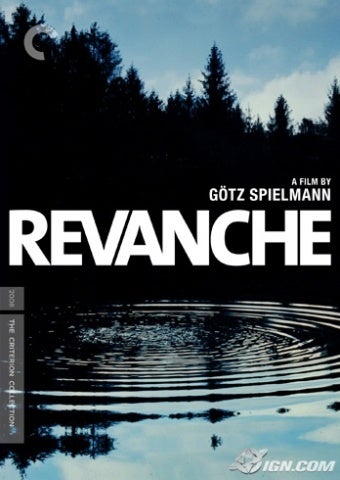 Revanche begins with a reflection of trees in a lake at twilight. They’re seen upside down—an image of nature reversed—yet the earth is eerily calm. This almost otherworldly illusion arouses a viewer’s awareness of perspective, which is then disturbed by the splash of an object tossed into the middle of the lake. Widening ripples shatter the impression of stillness, and a genuine sense of mystery sets in. Such an intimation of the supernatural typifies Austrian writer-director Götz Spielmann’s unique vision in this film.

Although Revanche is Spielmann’s first film to be released in the United States, it is actually his fifth overall, so his style and tone come to us fully developed. He began his career as a playwright, yet Revanche is thoroughly cinematic in story, look, and pace. Its chronicle of underworld desperation and domestic loyalties observes a plain, uncontrived natural universe whose immanence and splendor are depicted realistically, mysteriously, classically. This is the story of several seemingly unrelated characters whose interconnectedness evokes the quizzical, unknowable facts of existence and announces the potential of faith.

Spielmann’s arrival on the American film scene is exciting for the way Revanche opposes the contemporary trend toward dark pessimism with a vision that contemplates light and, conditionally, belief. At one point, a repentant character is asked, “What would your God say?” and she answers, “He’d understand.” Revanche’s plot resembles classic film noir yet ultimately renovates it: Alex (Johannes Krisch), a strapping ex-convict working as a bouncer at the Cinderella, a bar/brothel in Vienna, schemes to escape that mean world, along with Tamara (Irina Potapenko), a Ukrainian immigrant working there as a stripper and prostitute, by robbing a bank and investing the money in a friend’s bar. An unforeseen turn of events reconnects Alex to his estranged grandfather, Hausner (Hannes Thanheiser), an elderly farmer in a small village, and to the rural life Alex escaped. These events also irrevocably tie Alex’s and Tamara’s fates to those of a couple living near Hausner’s farm, policeman Robert (Andreas Lust) and housewife Susanne (Ursula Strauss). Moving from city to country allows Spielmann to poignantly contrast the experiences of the two couples.

But these characters’ relationships go deeper than dramatic coincidence. By giving both couples equal narrative weight, Spielmann shows striking commonalities among seemingly different people. When Robert complains of being cursed with bad luck, he echoes Alex’s earlier cry of desperation. Each of the four main characters becomes involved in a form of retaliation against life’s unfairness (Revanche is German for “revenge,” as well as “second chance,” as in a rematch). Spielmann’s classical unities and timeless storytelling verities avoid sentimentality and thus seem fresh.

Like that disturbing image of an upside-down lakefront, Spielmann’s charac­ters change our perspective on the world and life as movies conventionally present them. The spiritual conflicts of the dead-end urban underground, where gangsters and hookers deceive and exploit one another, extend to the peaceful-looking countryside, where people live in neat houses and work in respectable professions. Bringing together urban and rural struggle, Spielmann balances mankind’s philosophical quandaries and daily strife, searching for meaning in our shared fate.

To Read the Rest of the Essay
Posted by Michael at 2:50 PM