‘Cinema is that which is between things’
- Jean-Luc Godard (1)

Manny Farber says of the The Big Sleep (Howard Hawks, 1946, US): ‘[It] ignores all the conventions of the gangster film to feast on meaningless business and witty asides’. (2) One of the ‘fine moments’ in the film, he writes, is ‘no longer than a blink’: Philip Marlowe, played by Humphrey Bogart, looks up at a sign as he crosses the street from one store to another. In fact, Farber is probably mistaken. Marlowe does not appear to look up at a sign. Rather, he seems to be surveying the sky in response to loud claps of thunder. A few moments later, after more claps, the heavy rain nearly makes it possible for him to spend the afternoon sheltering in the Acme Bookstore with the sassy proprietor played by Dorothy Malone. Instead, disappointingly, work calls, and he must follow bad guy Geiger through the stormy night. Bogart’s gesture is therefore not strictly, in Farber’s terms, a piece of ‘meaningless business’ because it relates to the impending storm which is a feature of the narrative. Yet, the spirit of Farber’s point remains: the claps of thunder and Bogart’s gesture are incidental at this point. The thunder and rain could credibly begin while he is in the bookshop.

Farber’s mistake (written before the privilege of repeated scrutiny permitted by video recordings) does not undermine his deeper understanding of what the gesture adds. He talks about the film having ‘a life of its own that goes on beneath the story action ... All the unbelievable events ... are tied together by miserable time jumps, but, within each skit, there is a logic of space, a great idea of personality, gesture, where each person is’. (3) Moreover, there is another ‘unnecessary’ gesture, which Farber does not mention. It takes place on the other side of the street – and in the background of the shot – where Bogart slaps the top of a water hydrant. Crucially, he does not stop. He may be quickly taking stock, touching-base (for safety, superstitiously perhaps), while remaining on the move. In general, it suggests Marlowe’s fluency and ease in the city, and Bogart’s on the set. As he crosses the road, I sense the construction of the setting, all its elements intimately packed into the frame – the crossing cars, the comings and goings of people – creating oblivious busyness. Yet, the meticulousness of the staging does not determine the action; paradoxically it creates a living world, precisely brought to life (an ideal environment for all that ‘meaningless business’). This is partly because responsive performers like Bogart inhabit the world built for them; they live in it. (4) In Farber’s terms, both the gestures give us ‘a logic of space, a great idea of personality, where this person is’ – this street, here, now, between these two bookstores, looking up, just before it rains, crossing it, now, touching this hydrant, as he passes. (5)

The whole scene that follows, between Bogart and Malone, is like a ‘witty aside’ but given density by all ‘those tiny, mysterious interactions between the actor and the scene’. Bogart speedily delivers, ‘Would you have a Ben Hur eighteen sixty third edition with a duplicated line on page one sixteen?’; announces that he would rather get ‘wet inside’ with the ‘pretty good’ bottle of rye that he ‘just happens to have’ in his pocket; hovers his right hand over his waist, lightly drumming his digits; and later points two fingers towards his eyes to prompt Malone to remove her spectacles. Malone, meanwhile, unhurriedly folds her arms; nimbly manipulates the pencil, evidently sexual but in scholarly hands; precisely delivers her list of each aspect of Geiger’s appearance while she ambiguously moves her eyes up and down each aspect of Bogart’s; takes out those little white cups in the upper drawer of the desk; and removes the pin, carefully spreading her lower hair just enough for it to open up and sit more comfortably upon her shoulders (tightly bunched hair prudently unfurled rather than spectacularly released). All that is ‘mysterious’ lies in the performers’ interactions, made readily available to us, and not in a secretive dissolve that insinuates but ultimately hides very little. Malone remains just a ‘pal’ – her sexual disappointment represented in his comradely squeeze of her upper arm – and she never appears again in the film. 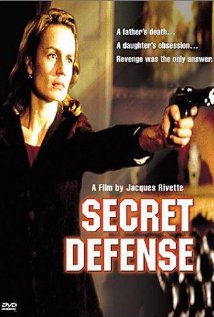