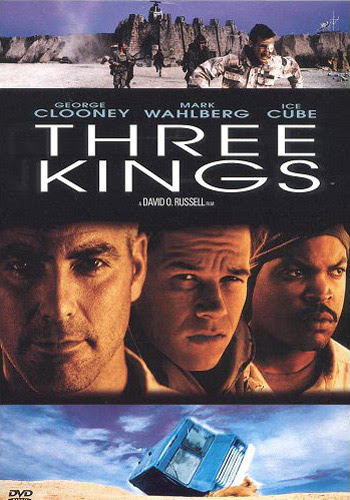 Non-oppositional critique of the Gulf War

In general, Three Kings’ marketing and reception dwelt on its supposedly unconventional nature. By unconventional, I mean “oppositional” discourse and imagery in the sense of contrasting to those found in dominant cultural productions. Although I will argue that the film does not, in fact, deviate from a typical Hollywood film in its basic message and structure, Three Kings does occupy a somewhat tenuous position in terms of Hollywood-type unconventionality. At first glance, viewers might expect the film to be an action-packed adventure and war movie. The main actors are blockbuster action stars (with the exception of Spike Jonze, director of Being John Malkovich and several “Beastie Boys” videos). And director Russell’s previous films, Spanking the Monkey and Flirting with Disaster, were offbeat in their brand of dark comedy, if not particularly unconventional in form or plot.

Initially film reviewers considered the story original. They said this film had more to it than met the eye, that its message and structure differed from most Hollywood films. A typical review praised Three Kings for its “genre subversion, anarchic attitude and barbed political commentary… making cogent points about… America’s role as the world’s policeman.” This same reviewer even suggested that the film addressed “the amorality and lack of consistent principles in American foreign policy. No Hollywood film in memory has addressed such an issue” (McCarthy par. 4 and 18).

However, although Russell does make a certain social critique of the Gulf War, as I will explore below, it is based in mainstream rather than oppositional discourses. For example, he explained this as his goal:

Taking people’s perceptions of this war, and turning them on their head… all the assumptions that you had about this war need to be looked at and turned over, including the sense of satisfaction you had as a moral victor, as an American.

However, if one were to make an explanatory critique subverting mainstream perceptions of the Gulf War, one would have to take into account the struggle’s historical context and the economic and ideological interests behind U.S. intervention. Such an argument was made by Noam Chomsky and Michael Albert, for example, when they asserted that “the real reason for U.S. opposition to Iraqi occupation of Kuwait is… to keep Washington, Wall Street, and their allies in charge of setting oil prices” (par. 5). And as Chomsky and Albert further pointed out, the U.S. government also has an ideological interest in perpetuating militarism in order to maintain the status quo of military spending and interventionist foreign policy.

Three Kings does not offer this sort of explanatory critique. Instead, the film presents the protagonists as coming to a realization that the United States has failed to save Iraq and destroy Hussein’s regime. According to the film, the United States is mistaken not because it intervened in the Middle East but rather because it did not follow through in its mission to save the good Arabs and crush the bad Arabs, a mission perpetuating neocolonial ideals. The heroes of Three Kings, in terms of the film’s logic, right the wrongs of the United States by saving a small group of Iraqi civilians, thus reproducing “the [neo]colonialist structure of the heroes’ relation to the native… [to] sort out the problems of people who cannot sort things out for themselves” (Dyer 156).

Neocolonial cinema encourages the spectator to identify with representations of the colonizing subject and, by partaking of the trajectory set up by the storyline, to posit the colonial project itself as desirable. For example, in the scene in which the U.S. soldier protagonists are shown first entering the village, the images largely present their point of view, inviting identification by literally allowing the spectator to see through their eyes. In this scene the Iraqi civilians are portrayed as dominated and submissive as they beg the Americans to stay and help them. Other Iraqis who want to fight seem incapable of acting on their own as they cry out, “The Americans are here. It’s okay to come out. We can fight Saddam!” Thus, all Iraqi civilians—those beaten down and those who are still resistant—are presented as entirely dependent on U.S. help.

As Shohat and Stam put it, such a scene functions to “mobilize” spectatorial desire to participate in the narrative line about the protagonists’successful “neo-colonial mission.” The mobilization of desire works in tandem with spectator positions. Just as the cinematic apparatus interpellates the viewer to identify with the characters and narrative, the desire for which the protagonists strive also becomes the viewer’s desire .

In its ties with other fictions, including novels, drama, and song lyrics, Three Kings integrates traditional U.S. cultural and cinematic themes, especially about the outlaw hero. The film also uses a common Hollywood script format for dealing with cultural crises, that of the “problem picture.” These script strategies further weaken the film’s critique of United States ideals. In terms of screenwriting, Robert Ray discusses narrative strategies common in Hollywood in which morally centered characters enact a drama against a background of contemporary social issues. This kind of script development is common in what Ray terms “problem pictures,” films that critique large social issues but ultimately have happy endings that belie those problems (147).

In films like these, the outlaw hero is a common character. Such a figure possesses his own moral code and works to “correct” socially unjust laws and authority figures (Ray 15). For example, as Richard Dyer describes the genre, in the Rambo movies that attempt to critique the Vietnam War, the protagonist Rambo is

doing the job… that the United States government should be doing. Thus he repeatedly upholds basic American values against the actuality of America” (Dyer 159-160).

In this way, Hollywood’s use of the outlaw hero as a solution to historical events distorts perceptions of those events as part of social history, that is, outside of their filmic portrayals (Ray 59-62).