September 17 will mark the first anniversary of the Occupy Movement, the first day of the Occupy Wall Street takeover of Zucotti Park in order to protest social and economic inequality, the abuses of the financial sector that led to the 2008 Global Economic Crisis, the undue influence of corporate money in the US government, and the way these problems undermine democracy.

Although the Occupy Movement looks to Occupy Wall Street as its first day of action, the movement was inspired from resistance movements around the world that were challenging similar injustices by their economic and political elites. These included the Arab Spring in Egypt, the encampments of the Spanish Indignants, and the 2011 Wisconsin protests. Canadian activists working with the magazine Adbusters led the original call to gather at Wall Street during the summer of 2011, circulating a communiqué featuring a graceful ballerina balanced on the head of the iconic Wall Street bull and calling on protesters to gather and occupy Wall Street on 9/17.

The early days of the Wall Street protests were generally ignored by the mainstream press or demonized as the actions of lazy, dirty malcontents. To counteract this blackout, media savvy Occupy activists set up streaming video of Occupy Wall Street events so that those unable to participate directly could remain informed and experience the vitality of the movement. A series of brutal attacks by the New York City police were captured on video, most notoriously a high ranking officer spraying quarantined young females in the face with pepper spray, and immediately distributed through internet sources. Occupy went viral.

Inspired by the courage and passion of the occupiers of Wall Street as they faced the quasi-militaristic repression of the New York police, several women put a call out in Lexington for our own Occupy to begin September 29, 2011, at the J.P. Morgan Chase Plaza on Main Street. Although we never gained the huge numbers of other occupations, we were the third city to initiate a continuous occupation and for a time were the longest continuous occupation.

At the movement’s height over 1300 official Occupy Movement sites set up camp around the globe. Occupy Lexington participants took the opportunity to visit some of these sites, including in Louisville, New York City, Washington DC, Los Angeles, Oakland, Portland, New Orleans and Amsterdam. One intrepid Occupy Lexington member even joined a group on a walk across the United States to bring attention to the Occupy Movement. In turn, Occupy Lexington received visitors from other Occupy sites and communications from around the world.

North of Center’s “Our Man in Amsterdam” was a leading force in the Occupy Amsterdam site and kept us up-to-date on events there. The broader movement began publishing their viewpoints and distributing them to the American public. These included the Occupied Wall Street Journal, the Occupied Chicago Tribune, N+1 magazine’s Occupy!, and even the Occupied Lexington Herald-Leader. A series of books and pamphlets followed.

Here in Lexington as at other movement sites, Occupations provided an opportunity to discuss the pressing political and economic issues of the day with people from across the political spectrum. As a member of Occupy Lexington I had long civil discussions with people of all ages, ethnicities, faiths, politics, and economic backgrounds. The process deepened my empathy for the difficulties different people face.

Our man in Amsterdam. Photo courtesy Our Man collection.

And this is Occupy Lexington’s legacy, and the legacy of most of last year’s 1300 occupations, our putting ourselves outside to meet each other and talk. We initiated an ongoing discussion about the need for participatory, community-based, economics. We revived an understanding of democratic principles as involving the voices of all people—no matter how much money they make or what families they belong to—and opened our eyes to politics beyond the pulling of a lever. We extended our notion of the possibilities of a political system beyond the entrenched, janus-faced, hierarchy of Democrats and Republicans. We made Americans aware of the broader global resistance movement challenging predatory economic policies that prey upon the weakest in order to benefit a small minority. 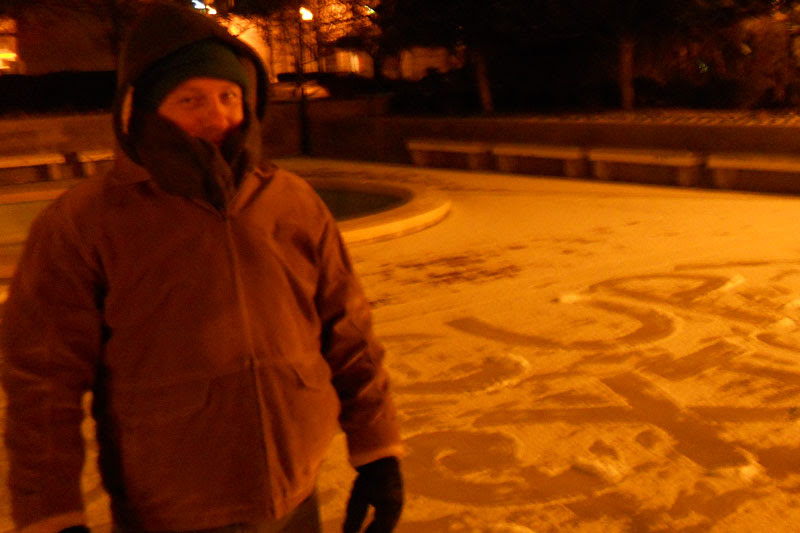 Although the physical site for Occupy Lexington eventually ended in February, it expanded into community projects. Like at other disbanded sites across the USA, we formed reading/discussion groups, established community gardens, attended community gatherings at public parks, and continued discussions about community politics. Ian Epperson’s People’s Budget started at Occupy. Central Kentucky Move to Amend has roots at JP Morgan Plaza. So does CROCK (Community Radicals of Central Kentucky), the one I’m most involved in, which does community gardening, holds reading and discussion groups, helps outreach/organizing, and any other miscellany fun things that build community.

On this anniversary of public occupation, my message is to jump on in. Join that discussion. Be part of that action. You’ve got outlets.
Posted by Michael Benton at 8:50 AM