With more than 2,500,000 U.S. personnel serving across the planet and military bases spread across each continent, it's time to face up to the fact that our American democracy has spawned a global empire.

The following is excerpted from Chalmers Johnson's new book, "Nemesis: The Last Days of the American Republic" (Metropolitan Books). 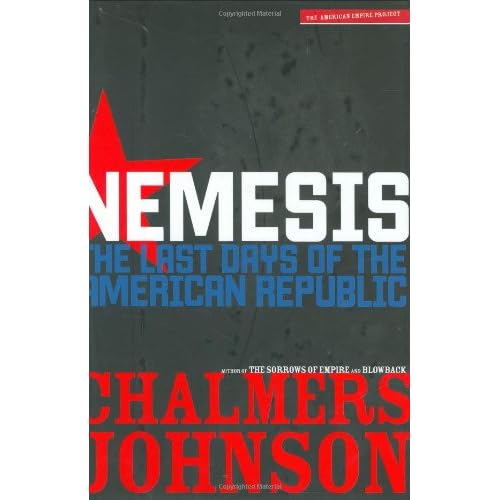 Once upon a time, you could trace the spread of imperialism by counting up colonies. America's version of the colony is the military base; and by following the changing politics of global basing, one can learn much about our ever more all-encompassing imperial "footprint" and the militarism that grows with it.

It is not easy, however, to assess the size or exact value of our empire of bases. Official records available to the public on these subjects are misleading, although instructive. According to the Defense Department's annual inventories from 2002 to 2005 of real property it owns around the world, the Base Structure Report, there has been an immense churning in the numbers of installations.

The total of America's military bases in other people's countries in 2005, according to official sources, was 737. Reflecting massive deployments to Iraq and the pursuit of President Bush's strategy of preemptive war, the trend line for numbers of overseas bases continues to go up.

Interestingly enough, the thirty-eight large and medium-sized American facilities spread around the globe in 2005 -- mostly air and naval bases for our bombers and fleets -- almost exactly equals Britain's thirty-six naval bases and army garrisons at its imperial zenith in 1898. The Roman Empire at its height in 117 AD required thirty-seven major bases to police its realm from Britannia to Egypt, from Hispania to Armenia. Perhaps the optimum number of major citadels and fortresses for an imperialist aspiring to dominate the world is somewhere between thirty-five and forty.

Using data from fiscal year 2005, the Pentagon bureaucrats calculated that its overseas bases were worth at least $127 billion -- surely far too low a figure but still larger than the gross domestic products of most countries -- and an estimated $658.1 billion for all of them, foreign and domestic (a base's "worth" is based on a Department of Defense estimate of what it would cost to replace it). During fiscal 2005, the military high command deployed to our overseas bases some 196,975 uniformed personnel as well as an equal number of dependents and Department of Defense civilian officials, and employed an additional 81,425 locally hired foreigners.

The worldwide total of U.S. military personnel in 2005, including those based domestically, was 1,840,062 supported by an additional 473,306 Defense Department civil service employees and 203,328 local hires. Its overseas bases, according to the Pentagon, contained 32,327 barracks, hangars, hospitals, and other buildings, which it owns, and 16,527 more that it leased. The size of these holdings was recorded in the inventory as covering 687,347 acres overseas and 29,819,492 acres worldwide, making the Pentagon easily one of the world's largest landlords.

To Read the Rest of the Excerpt
Posted by Michael Benton at 8:32 AM