No one book has been more important for altering the perception of pornography in academia than Linda Williams’s study of the pornographic movie and its history, Hard Core.[8] It appeared at a time when the theoretical discourse about pornography was characterized by impassioned rhetoric rather than well-founded reflections, and it constituted an important first step toward a less judgmental attitude to porn. At the time the book came out, the contemporary debate was concerned with the question of whether or not pornography more or less automatically translated into violation of women. In the face of such assertions, Williams quietly pointed out that the pornographic film can be seen as a genre just like the action movie or the musical, a genre that comes with a history to be studied. The pornographic movie thus can be interpreted and discussed much as any other cultural discourse.

With this book the academic study of pornography was, if not born, then at least established as a field of investigation in its own right. There had been important books prior to Williams’s study, of course, but they were all rather defensive about the nature of their interest in the subject, tacitly accepting the academic preconception of pornography as a somewhat peripheral phenomenon, of merely tangential interest to the study of art, literature, and society.[9] Williams’s book much more successfully positions pornography as one cultural discourse amongst others.

In Hard Core Williams describes cinematic pornography as the joint product of technological innovations and historical contingencies. While the anti-pornography camp of critics like Andrea Dworkin and Catherine MacKinnon may have a point in stressing that pornography in general tends to express a view of women which is both stereotypical and misogynistic, this adverse social effect does not derive from the nature of porn, Williams insists, but from its historical context. Like other cultural discourses, to a considerable extent pornography reflects its time. Furthermore, like other genres the pornographic movie has a history. And if we consider the films produced for and screened in cinemas during the 1970s in the light of that history, pornography might seem less and not more misogynistic the closer we come to our own present. From this perspective Williams largely defends pornography, arguing not to dismiss films like Deep Throat and The Opening of Misty Beethoven as misogynistic. In her reading, even though these films proceed from gender stereotypes, they also clearly revolve around the problem of female pleasure, and hence contain a utopian dimension almost in spite of themselves. Drawing on Fredric Jameson’s suggestion that a narrative genre may contain an attempt to provide an imaginary resolution to a real social conflict, Williams approaches hardcore as a genre enacting “the solution to the problem of sex through the performance of sex” (147).[10]

While hailed as a pioneering work, Williams’s book has also received important critiques. As Peter Lehman points out in a well-informed article, Williams overemphasizes the importance of narrative in the pornographic film and hereby tacitly elides other important aspects of it.[11] Profiting from the critique, Williams has subsequently revised her original position in a number of articles.[12] She has revised her original argument that pornography is likely to develop into a genre among other genres within mainstream cinema. Rather than being the “classical” era of cinematic pornography, that period between 1972 and 1985 in which pornography was made for full-blown cinematic screening, perhaps better serves as

“a short blip in an otherwise fairly consistent history of more ‘interactive’ engagements between bodies of spectators and machineries or networks of vision — whether the whirring projectors of the stag party, the remote controls of the VCRs, or the ‘mouse’ of interactive games.”[13]

These modifications notwithstanding, her general point of departure remains intact: pornography is a genre like other genres, and can be read and interpreted as such.

“If Linda Williams’ breakthrough was to get us to think of pornographic film as film, that is, as a genre that can be compared to other popular genres like the western, the science fiction film, the gangster film, or the musical (porn’s closest kin, she says) and studied with the same analytical tools we take to the study of other films, the next logical step, it seems, would be to consider pornographic film as popular culture” (315).[14] 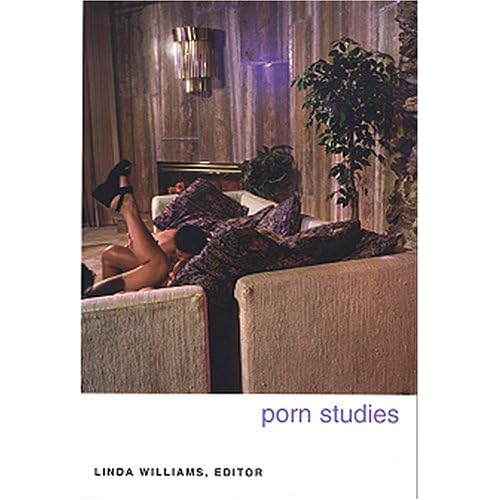