Edward S. Herman and David Peterson: Rwanda and the Democratic Republic of Congo in the Propaganda System

Rwanda and the Democratic Republic of Congo in the Propaganda System
by Edward S. Herman and David Peterson
Monthly Review 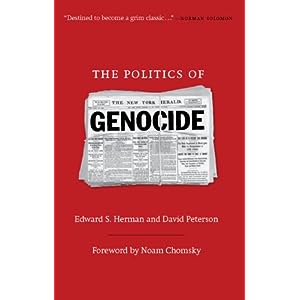 Excerpted from The Politics of Genocide (Monthly Review Press, 2009).

Elsewhere we have written that the breakup of Yugoslavia “may have been the most misrepresented series of major events over the past twenty years.”1 But the far bloodier and more destructive invasions, insurgencies, and civil wars that have ravaged several countries in the Great Lakes region of Central Africa over the same years may have been subjected to even greater misrepresentation.

To a remarkable degree, all major sectors of the Western establishment swallowed a propaganda line on Rwanda that turned perpetrator and victim upside-down. In the much-cited 1999 study, “Leave None to Tell the Story”: Genocide in Rwanda, on behalf of Human Rights Watch and the International Federation of Human Rights in Paris, Alison Des Forges writes that “By late March 1994, Hutu Power leaders were determined to slaughter massive numbers of Tutsi and Hutu opposed to [Hutu President Juvénal] Habyarimana,” and that on April 6, 1994, with the assassination of Habyarimana, “[a] small group of his close associates…decided to execute the planned extermination.”

Although “responsibility for killing Habyarimana is a serious issue,” writes Des Forges, it pales in comparison to “responsibility for the genocide. We know little about who assassinated Habyarimana.” This is a false statement, as we show in detail below. “We know more about who used the assassination as the pretext to begin a slaughter that had been planned for months” is true enough, but in exactly the opposite sense reported by Des Forges.2

During testimony at a major trial of four Hutu former military officers before the International Criminal Tribunal for Rwanda (ICTR), Des Forges acknowledged that by April 1992 (i.e., a full twenty-four months before “The Genocide” is alleged to have been perpetrated), the “government in charge of Rwanda [had become] a multiparty government, including Tutsi representatives, and it is for that reason alone that it is impossible to conclude that there was planning of a genocide by that government.”3

Although Des Forges tried to salvage the Hutu conspiracy model, alleging plans by individual Hutu members of the coalition government to use their “official powers” to carry out a preplanned genocide, this model disintegrated on cross-examination.4 Des Forges could not explain how Hutu “individuals” used these “powers” without the knowledge of their Tutsi and Rwandan Patriotic Front (RPF) associates. Furthermore, she was forced to admit that pro-RPF ministers were in cahoots with the RPF and its plans for war (which we describe below), and that after the Habyarimana assassination, the RPF did not simply respond in self-defense to a Hutu-organized killing spree, but initiated its own killing spree. In other words, while the Hutu members of Rwanda’s power-sharing government would have had great difficulty organizing a genocide against the Tutsi, the Tutsi-led RPF was well-positioned to paralyze any government response to plans it had developed—and that were implemented—to avoid the threat of a free election the RPF was destined to lose, to assassinate the Hutu president, and to take over the country by military force. Yet Des Forges’s dramatic concessions before the ICTR never turned up in the Western media, and in her public statements thereafter she continued to repeat the official propaganda line about a Hutu conspiracy to commit genocide, right up to the very end.5

To accept the standard model of “The Genocide,” one must ignore the large-scale killing and ethnic cleansing of Hutus by the RPF long before the April-July 1994 period, which began when Ugandan forces invaded Rwanda under President (and dictator) Yoweri Museveni on October 1, 1990. At its inception, the RPF was a wing of the Ugandan army, the RPF’s leader, Paul Kagame, having served as director of Ugandan military intelligence in the 1980s. The Ugandan invasion and resultant combat were not a “civil war,” but rather a clear case of aggression. However, the invasion led to no reprimand or cessation of support by the United States or Britain—and, in contrast to Iraq’s invasion of Kuwait just two months before, which was countered in the Security Council by a same-day demand that Iraq withdraw its forces immediately—the Council took no action on the Ugandan invasion of Rwanda until March 1993. It did not even authorize an observer mission (UNOMUR) until late June 1993, the RPF by then having occupied much of northern Rwanda and driven out several hundred thousand Hutu farmers.6

It is clear that Museveni and the RPF were perceived as serving U.S. interests, and that the government of President Habyarimana was targeted for ouster.7 UN Security Council inaction flowed from this political bias. In his assessment of the years he spent representing U.S. interests in Africa, former Assistant Secretary of State Herman Cohen raised the question of why, as of October 1, 1990, the “first day of the crisis,” as he calls it, “did [the United States] automatically exclude the policy option of informing Ugandan President Museveni that the invasion of Rwanda by uniformed members of the Ugandan army was totally unacceptable, and that the continuation of good relations between the United States and Uganda would depend on his getting the RPF back across the border?”8 This question is naïve but revealing—the answer, like that to the question of why the United States lobbied for the withdrawal of UN forces from Rwanda as “The Genocide” was getting under way in April 1994, is that the Ugandan army and RPF were doing what the United States wanted done in Rwanda.

The United States and its allies worked hard in the early 1990s to weaken the Rwandan government, forcing the abandonment of many of the economic and social gains from the social revolution of 1959, thereby making the Habyarimana government less popular, and helping to reinforce the Tutsi minority’s economic power.9 Eventually, the RPF was able to achieve a legal military presence inside Rwanda, thanks to a series of ceasefires and other agreements. These agreements led to the Arusha Peace Accords of August 1993, pressed upon the Rwandan government by the United States and its allies, called for the “integration” of the armed forces of Rwanda and the RPF, and for a “transitional,” power-sharing government until national elections could be held in 1995.10 These Peace Accords positioned the RPF for its bloody overthrow of a relatively democratic coalition government, and the takeover of the Rwandan state by a minority dictatorship.

To Read the Rest of the Essay
Posted by Michael Benton at 12:59 AM