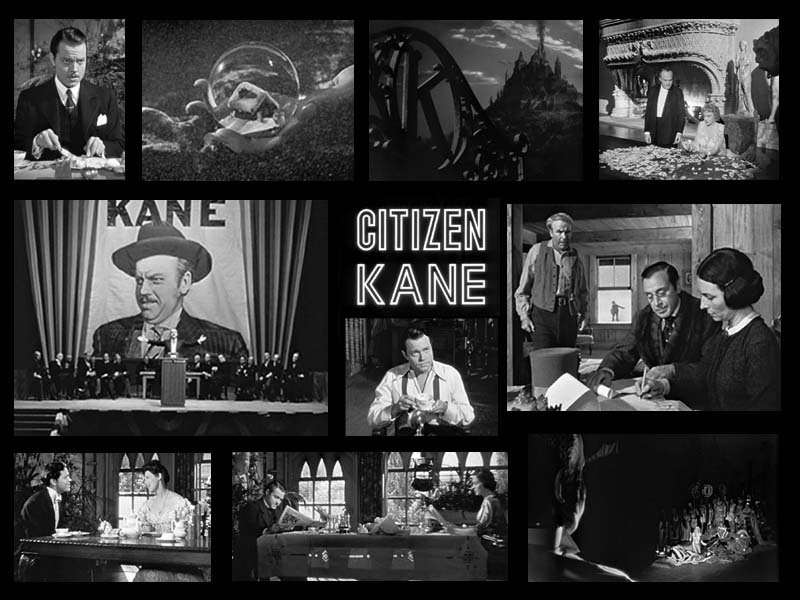 Citizen Kane (Orson Welles, 1941) is essentially a tale told in the hope of answering the question: What is the essence of this rarefied entity called man? More importantly, the story is about the life of one individual. The story unfolds around an enigmatic character named Charles Foster Kane (Orson Welles). When Kane’s life finally expires, his associates and friends are contacted and urged to say what they know about this newspaper magnate. Citizen Kane highlights the struggle that often exists between the private, internal and metaphysical reality that makes up the essence of each individual, and its distillation in objective reality.

In the opening sequence we are treated to a glimpse into the world of Charles Foster Kane’s mansion — his castle — as some call it. The camera stands outside a black, cast-iron gate that has a large letter K affixed at the top. The night is dark and foggy, this, perhaps intimating or foreshadowing a mystery that is about to unravel. Citizen Kane is most definitely a suspense yarn that surprises us with its metaphysical/existential complexity.

In some respects, the film is truly a supreme portrayal of childhood. The theme of the film really hinges on the understanding or lack thereof that Charles Foster Kane’s friends, colleagues, and the media have of the enigmatic character. While the film suggests that the life of public individuals can never remain private, we are also to believe that the inner life of private individuals, on the other hand, can never be made truly explicit. Part of the reason for this is that if we understand individuality to mean an autonomous self-reflective form of contemplation, then this individualism of which Kane partakes, is his stamp of originality. Without a doubt, Kane is a complicated and multifaceted character. In this very respect he is a genuine character and not just a caricature or cardboard entity, as is the case more often than not in post 1960s films, for instance. Kane already displays his personality and idealism as a young man.

The great irony that surrounds Charles Foster Kane is that he is everyman. In fact, he is a composite sketch of many men. His struggle is characterised by the anonymity imposed on individuality by the contingencies of the objective world, and an autonomous sense of interiority. Kane knows exactly what he wants. What seems so misleading about the film in terms of the latter is the fact that Kane is both a public and wealthy person. These two components of his personal circumstance distract us from attempting to come to terms with Kane’s identity and not just with what he does. Citizen Kane is essentially an existential tale told in the only manner that any cinematic story can be told: with words and pictures.

Guillermo Cabrera Infante, writer and acute observer of cinema, makes the point that the two themes that inspire the film are the degradation of privacy of public persons and the crushing weight of materialism. Cabrera Infante’s most penetrating notion is his argument that the former is expressed verbally, while the latter theme is visual. This, he explains, is a strong case of counterpoint. (1) The essential ingredient that makes Citizen Kane a tale of existential significance is the collage of different characters from Kane’s past that offer testimonial commentary on his life. The firsthand account of these people creates a vital reality to the story that attempts to penetrate into the essence of Charles Foster Kane — the man — as he knew himself.

But do these testimonies succeed? Just who are these people? After we have dispensed with the outright malicious will of those who have an ax to grind, the limitations placed on us by time and memory, romantic exaggerations, and simple forgetting of details, we arrive at bare naked reality. In many respects, Kane enjoys the privilege of having so many people who are willing to make known their memories of him. How much their insight can say anything substantial about Kane has everything to do with the moral quality of his acquaintances and friends. Depending on their ability to articulate what they know about him, and the degree of their good will, will Kane’s essential qualities become known. This process, then, also involves a case of good fortune. If we are moved by the truism that the dead tell no tales, then what are we left with? Well, clearly their life, essence and work, as these can only be rounded off by those who knew them. This is a case of simple justice.

Citizen Kane offers an exploration of existential autonomy by juxtaposing the virtues of human essence with the exigencies of the objective world. We can contrast this dualistic approach where, even though the main emphasis is the internal, with one of Orson Welles last films — F for Fake (1973), a film that also seeks to uncover the difference between appearance and reality. F for Fake only focuses on the daily lives of several people, and their chic, incessant chatter. F for Fake tries to answer the question: what is real? In the latter film Orson Welles is back to his old cinematic tricks, the very staple of imagination that brought him notoriety, beginning with his radio broadcast of H.G. Well’s novel War of the Worlds.

Posted by Michael Benton at 9:57 AM