Stephen Gaunson: Cocksucker Blues -- The Rolling Stones and Some Notes on Robert Frank

Cocksucker Blues: The Rolling Stones and Some Notes on Robert Frank
by Stephen Gaunson
Senses of Cinema 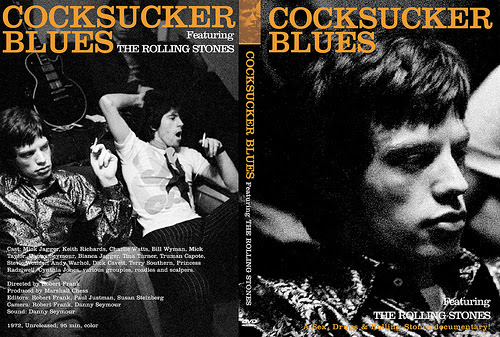 In 1971, the Rolling Stones had found themselves in all sorts of bother. Due to some bad management by Allen Klein, following the release of Sticky Fingers (1971), they owed more taxes than they could pay. Forced into exile, they fled the United Kingdom and lived a nomadic existence, mainly between the South of France and US. During this time, they recorded their double-album, which was appropriately entitled, Exile on Main Street. Including songs originally intended for their previous albums, Let it Bleed (1969) and Sticky Fingers, Exile is a rough and tinny sounding album that certainly captures the band’s raucous lifestyle from the time. Recorded mostly in Keith Richard’s mansion in the south of France, and produced by Jimmy Miller, it is hardly what many expected from the Stones. Absent of the polish or mainstream appeal of their previous albums, Exile was certainly a risky album to release, especially considering that the band’s future and stability was under significant question. Despite Exile on Main Street later being celebrated as one of their finest, at the time it was met with a mixed reaction. Indeed, Jagger’s voice sounds tired and worn, whereas the album itself lacks the imagination, direction and creativity of their previous few.

Jagger who had became friendly with Robert Frank whilst mixing the album in Los Angeles, asked him to design the cover. For the front, Frank chose a wall in a dingy New York City tattoo parlour, which was covered with photographs of strange and unusual people. He felt it illustrated the raucous jumble of the Stones’ recording. For the back, Frank filmed the Stones with his Super 8 camera, and then made stills out of the individual frames to match his original wall photograph. Jagger was impressed with Frank’s concept, and asked whether he would make a documentary of the band’s forthcoming American tour. Since their infamous Altamont concert, the Stones had not played in America. For Jagger, Frank personified the picturesque and romantic America that he loved. Yet, perhaps he had other reasons to ask Frank: since departing America in 1969, Jagger had feared threats against his life. Indeed, since Altamont, the Hells Angels were incensed that Jagger would not use them, as promised, as security for future American concerts. Indeed, Robert Greenfield’s 1974 book, A Journey through America with the Rolling Stones, that documents the 1972 tour, often discusses the various death threats that Jagger faced during this time. In fact, just before the tour began, Greenfield tells a story of four young girls accosting Jagger in a Los Angeles car park and asking whether he is afraid of being shot, to which he sincerely replies, “Yeah, I am”. (2) Maybe Jagger felt that a documentary crew might deter any would-be assassins. Or more vainly: capture his tragic end for the world to mourn.

The film’s title, ‘Cocksucker Blues’, that plays over its credit sequence, is taken from a Stones’ song which Jagger wrote to fulfil the group’s contractual obligations with Decca Records. Early in the film, the Stones’ auxiliary manager, Marshall Chess, explains Jagger’s intention to write a song that was “unreleasable’”. With lyrics that include, ‘I need to get my cock sucked… Where can I get my ass fucked?’, the Stones left Decca and formed their private label, Rolling Stones Records. Having also dumped Allen Klein as their manager, by the early seventies the band were becoming a more professional unit. Actually, Frank’s film documents the last real wild tour of the Stones. However, besides one brilliant performance of ‘Midnight Rambler’, Cocksucker Blues is not the brilliant tour film that many want to believe. And although film director, Jim Jamusch, may be right that it is “one of the best movies about rock and roll”, it is monotonous and dull. Indeed, scenes which depict the Stones as living an ugly, vacant and decadent existence, fuelled by their notorious cohort of drug dealers, groupies and celebrities are hardly enthralling. What’s more, in addition to the band themself, Frank is equally interested in the sleazy world of the groupies and crew who spend most of their time strung out in hotel rooms, often waiting for the band to turn up.

Demonstrated in one scene by Jagger’s then wife, Bianca, who sits sullenly in a corner, playing a musical box over and over, there is little to stimulate an intelligent or intellectual mind, and certainly, Frank paints a vivid, unattractive and monotonous portrait of the rock world. Shot mostly in black and white, with the concert footage filmed in colour, Cocksucker Blues is aesthetically ugly and barely watchable. In every sense, it is a dreadful and unpleasant viewing experience, that visually bears no resemblance to Frank’s other beautifully composed still and moving pictures.

Furthermore, unlike his other films, in Cocksucker Blues Frank depicts his characters as fairly shallow and insular, which is as much a departure for a Stones documentary as it is for Frank. Actually, while Jagger in Gimme Shelter, and more recently Being Mick (Kevin Macdonald and Jim Gable, 2001) and Shine a Light (Martin Scorsese, 2009) is given an opportunity to speak intelligently and insightfully about himself and his work, in Cocksucker Blues Frank exposes the pop star as a fairly banal personality. For instance, in one scene, an irritable and seemingly stoned Jagger, dressed in only his briefs, pretentiously babbles away, asking Frank a series of mundane questions, such as whether “he wears the same socks everyday?”.

However, such observations are more about Jagger and his broader cinematic presence than merely Frank’s pursuit to demystify the pop star. In fact, the contrast to scenes featuring Keith Richards is quite apparent. Opposed to Jagger, Richards is a compelling character who certainly relishes his role as ‘rock outlaw’. Whether it is throwing television sets off his hotel balcony or confusing the maître d’ with his obscure room service requests, Richards is never dull. Jagger though, unlike Richards, is a more complicated personality because he resists his ‘rock outlaw’ persona. Actually, at the time of this film, Jagger, who was living more of a high society glamorous lifestyle, in a poll compiled by over 200 international fashion editors was even named one of the best dressed men of 1972. (3) On stage, Jagger dressed in his flamboyant and camp jumpsuit, looks remarkably different to his band members, who dress like rockers in denim jeans, jackets and t-shirts. In fact, on stage the Stones look more like a Jagger backing band, than a unified rock group. But, according to Adam Blok, Jagger’s contrast to his band members and resistance to his rock outlaw role is symptomatic of the way he has always embraced contradiction: “the middle class student of economics playing leather tough; a white Brit singing black American music, a heterosexual who liked to flirt with boys”. (4)

In Cocksucker Blues, Jagger’s striking contradiction is how his stage and private personas seem almost unrecognisable. As Truman Capote remarked in an interview with Andy Warhol about the 1972 tour:

He’s one of the few people I’ve seen who’s able to do the extrovert thing, and then revert into another person almost instantly. And so, in that sense, he’s really an extraordinary actor. And that’s exactly what he is because: a) he can’t sing; b) he can’t dance; c) he doesn’t know a damn thing about music. But he does know about coming on and being a great showman. (5)

As commentators often note, Jagger’s peculiar personality, has continued to make him an awkward cinematic presence. Writing on the film Performance (Donald Cammell and Nicolas Roeg, 1969), Adrian Danks felt that Jagger is unlike many of his pop star contemporaries: “Whereas Dylan and The Beatles engage and command the camera, and the space and people around them, Jagger’s presence and his performances are much more undecided, uncommanding even.” (6) In Performance and other films such as Ned Kelly (Tony Richardson, 1970), Jagger is incapable of channelling the charismatic and alluring Jagger stageman, and interestingly, in both these films, Jagger’s only moment of illumination comes when the narratives allow him to perform a musical interlude: ‘Memo to Turner’ in Performance and ‘Wild Colonial Boy’ in Ned Kelly.

In Cocksucker Blues, despite Jagger featuring more prominently than the other Stones, Frank refrains from making him the star. In fact, Frank devotes equal time to the assortment of degenerates who travel along with the tour. Hanging mostly around hotel rooms, their stories and general conversations are dull and quite excruciating to endure. Curiously though, Frank makes no distinction between these figures and the die-hard fans of the band, who seem just as degenerate and drug dependant. For instance, one fan outside the venue and without a ticket, describes herself as a very ‘sad’ and ‘lonesome’ person, after the authorities took away her ‘acid baby’: “what’s wrong with a mother on acid, who loves her child… she was born on acid?”, she disturbingly remarks. Yet, within the context of the film, this character does not seem any more disturbing from the groupies, band and crew who shoot up in their hotel rooms and sniff cocaine backstage. Like the vacant world of these characters, Frank’s film is insular and claustrophobic. Moving between hotels, rock venues, cars, and in one scene, an airplane, which includes the film’s most gratuitous scene of group sex, the touring party are constantly confined within closed spaces.

For a band celebrated as ‘rock outlaws’, there is something very constrictive and paradoxical about their existence. Actually, apart from the few exciting snippets of live clips, there is nothing all that exhilarating or electrifying about the Rolling Stones. No wonder Capote said that the Stones did nothing to “excite his imagination” and refused to write on them for Rolling Stone magazine. Furthermore, Cocksucker Blues does nothing to fetishise and mythologise the Stones, and really, it comes in direct contrast to Gimme Shelter that depicts the band as the ‘good guys’. In fact, regardless of the 1972 tour being their most successful to date, that also attracted many positive reviews and brought a number of high profile celebrities to the shows, Frank concentrates almost exclusively on the seedier, lonely and unpleasant moments. 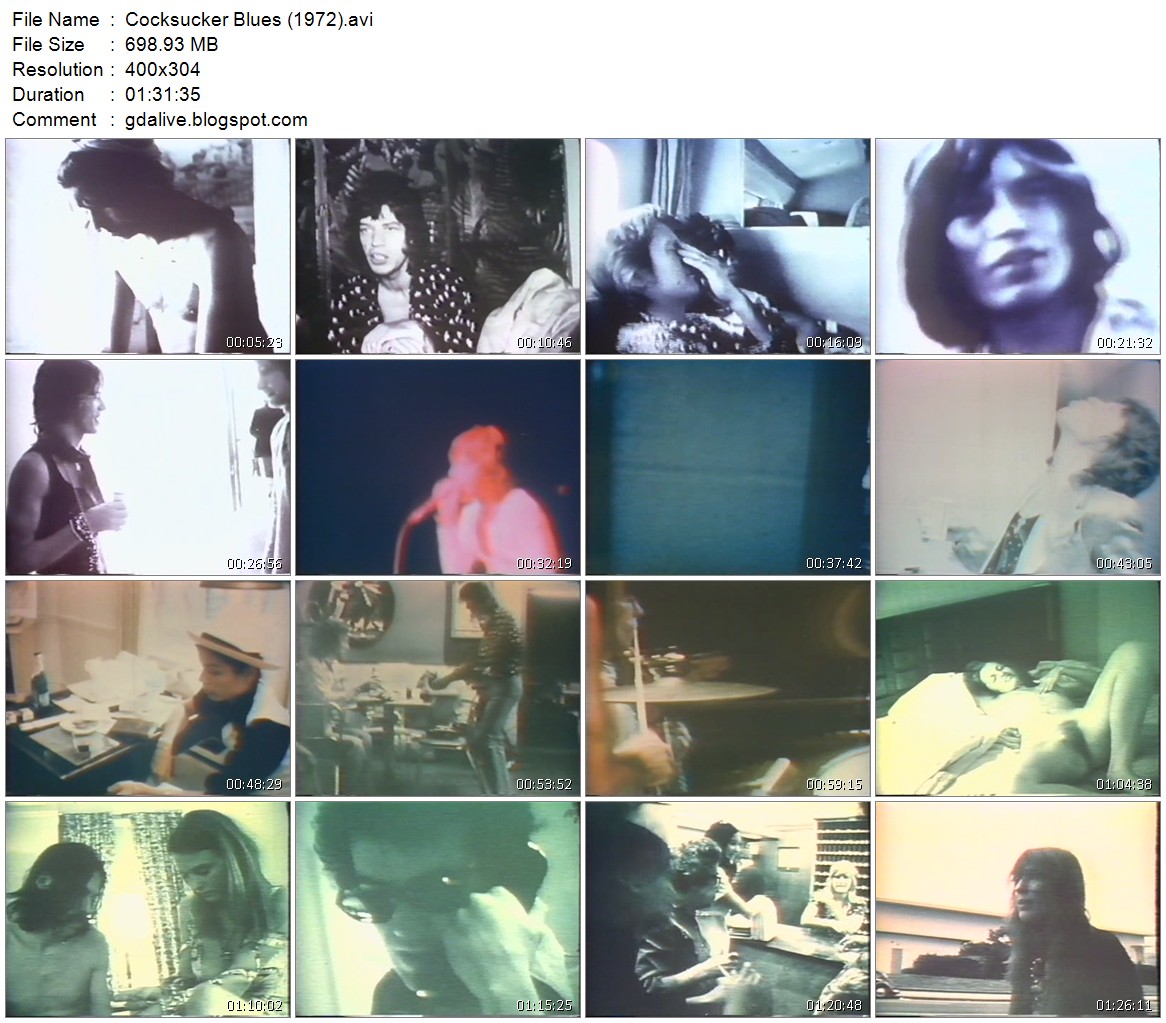