Davin is a fellow member of the Reconstruction editorial collective and he just published A Small World: Smart Houses and the Dream of the Perfect Day, from Duke University Press, 2008. I like the concept of the "Posthuman Bildungsroman" because it defines something that I find to be very disturbing and that needs to be addressed critically. It points toward the difficult situation of developing through interaction with multiple mediatized environments that are mutating us, while evading us, slipping in and out, we realize and then forget, consciousness and amnesia, slipping back to a primeval state or pushing forward to a posthuman singularity. Who are you--we remember Pete Townsend screaming drunkenly into the mirror [his lyrics, even if Daltrey sings them], now we scream at the "screen" who the fuck are "we" and listen to the mediatized voices scream back at us with a multitude of answers. The Posthuman Bildungsroman reaches back to hunting behaviors, only the landscape has changed and we are discovering what we are hunting in the process of hunting... or, we start out hunting what we know and get lost and forget just what it was we were hunting... a clearing opens and confusion steps into the vacated realm. 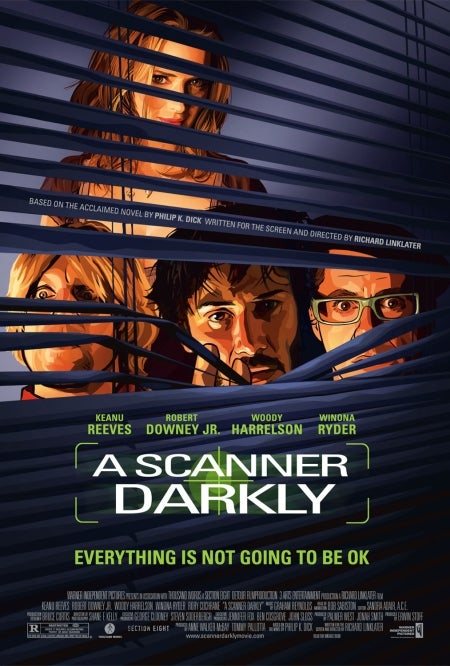 The ambiguous nature of the Posthuman Bildungsroman comes to its clearest representation in A Scanner Darkly. Agent Fred is a narcotics officer living in deep cover amongst addicts under the name Bob Arctor. His cover is so deep that Agent Fred must always wear a disguise to conceal his identity, even from his colleagues. As part of his investigation, he must record the everyday activities of his household. To keep his cover intact, he must use the drug Substance D and file surveillance reports on himself along with everyone else. In order to succeed, he must convince both his friends and his employers that he is Bob Arctor. His addiction to Substance D only complicates things further, a substance which has a botanical name of Mors ontologica, or "ontological death." The primary side effect of Substance D dependency is a growing disconnect between the hemispheres of his brain and a resulting split in his subjectivity. Uncertain about his actions as Arctor, he must submit to the authority of police surveillance. Eventually, he loses his job over his covert activities and enters rehabilitation. In the New-Path rehabilitation program, he takes the name Bruce, and must undergo extensive behavior modification in order to destroy his former self and be rebuilt into a functional member of society - which, in the end, is revealed as part of a police plan to find the source of Substance D: New-Path's farm labor camps. By then, of course, Agent Fred/Bob Arctor has been fully replaced by Bruce, who can barely function and who would be unrecognizable to any of his former selves.

The common thread running through these films is the idea that a self that can be encoded, erased, and re-written. In spite of the specific characteristics of each film's protagonist, they share a common identity in that they are all cobbled together from the images, objects, and information that surround them. If an inner self or authentic identity exists at all, it is in the will to self-actualization vis-à-vis the material world. These characters personalize and give the blessing of "agency" to the surface of this process. Unlike a true Bildungsroman, culture in these films does not offer the means by which one can discover a deeper, more authentic self. In the case of Memento, the external datastream confounds and distorts the protagonist to the extent that his only hope of a self is to embrace a lie. In Minority Report, the protagonist manages to buck the system, even as the image itself remains true but misinterpreted. In Paycheck, the protagonist's possessions are ultimately the only markers of truth. All three protagonists strive frantically for self-discovery, but must rely on the world of commodities, media, and representation in absence of a centered self. To return to the roots of the genre, the protagonists resemble reality television stars in that their reality is produced before their very eyes. The Fred/Arctor/Bruce personality in A Scanner Darkly seems to have totally abandoned the possibility that a "self" exists at all.

For a better understanding of the genre, it is useful to consider Scott Bukatman's concept "terminal identity." Terminal identity is spawned by "terminal culture" (which plays with definitions of "terminal" as destination, interface, and demise). Developing a discussion initiated in Haraway's "Cyborg Manifesto," Bukatman claims that the ambiguous postmodern self of contemporary popular culture is characterized by a "transcendence which is also always a surrender." [16] To paraphase, terminal identity is the subject position which can embrace the slick surfaces of the virtual without looking for something deeper. The terminal subject accepts the image at face value.

If we accept Bukatman's theory of terminal identity, then we might ask what sort of "coming of age" tale these films invoke. [17] Traditionally, we have had novels where "being" is uncovered: the first type being the traditional Bildungsroman, and the second type being those which exist in opposition to the genre -- incest genealogies of the gothic, the cracking of the mystery in the detective novel, or the radical revisions of science fiction -- all of which revel in the secrets of modern society.

The postmodern "coming of age" is radically different not just in its construction of identity through an assemblage of surfaces and images, but also in its ambiguous relationship with its purposes. The reality genre appears as a representation of what really is, but it also implies its own satire by exposing the flaws of "real people" and the flaws of "representations of real people." Hence the nearly instantaneous arrival of films like EdTV and The Truman Show. On the one hand, these shows reveal a scorn for mediation and a scorn for the bourgeois culture that they aim to police. On the other hand, they are pure forms of mediation and pure expressions of bourgeois values. The self becomes only the agent of its own destruction, saying "yes" to/by affirming reformatting and the installation of new operating systems.

Unlike the traditional Bildungsroman, whose countertype was the triumvirate of speculative genres aforementioned, the countertype to reality television is more essential in its critique. The two genres of reality television and its satire do not battle over the questions of Good and Evil; rather, they battle over the very existence of the self. In this way they resemble the gothic, the science fiction, and the detective story. But within these texts, there is fundamentally little difference between tales of disassembly and reassembly: they are equivalent processes of posthuman becoming.

The twist presented in these stories is not a discovery that pertains to some other; instead,it comes in the realization of who the protagonist has been all along. Where things get interesting is in the protagonists' utter mystery/uncertainty and befuddlement as to who they might be. Rather than wondering what is concealed beneath the surface, the characters themselves are pieced together from external cues, arriving at a subjective space that is not determined by an interior state, but by an assemblage of surrounding signs. Hence, Leonard's erroneous story is written on his skin. Anderton's story is edited into a coherent scheme which fits social knowledge about crime and deviance. Jenning's story is tucked into an assemblage of objects. Finally, Arctor's story is molded to fit the narrative of substance abuse, therapy, and law. If there is an inherent, internal knowledge of the essential self, these protagonists do not seem to know it/are unaware of it.

Unlike the traditional Bildungsroman, these tales do little to affirm the value of bourgeois society as an instrument of personal growth. Rather, they challenge the possibility of individual personal growth in favor of the outward signs of a coherent subjectivity and, in the process, call into question the validity of an atomistic self. This approach to externals affirms the conventional wisdom of what we know about postmodernism as an aesthetic that is preoccupied by surfaces and which eschews depth and interiority. It also confirms the assumptions of posthumanism, which suggest that the "person" is not simply the expression of an eternal, immutable state, but rather, is the point where discursive threads converge. Personal identity is an interpretation of culturally constructed notions of subjectivity.

To Read the Entire Essay
Posted by Michael Benton at 11:52 AM