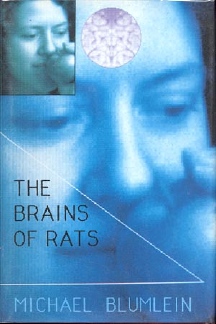 Michael Blumlein’s The Brains of Rats revealed to me the complexities of gender definition. He explores biological, cultural, and historical differences in gender accompanied by his own opinions and experiences. The tone of this piece is clearly established in the opening paragraphs as he surprises the reader with information of Joan of Arc possibly having had testicular feminization genetically making her a man (1). This was unknown to me; it completely caught me off guard, and ultimately left me wanting to read more. If Blumlein was attempting to shake up the reader’s perception of gender the goal was certainly achieved. All my life Joan of Arc has been paraded as an example of a fierce female to be revered for her strength and moral compass, so this new information from Blumlein left me feeling quite uneasy. If in fact Joan of Arc was a man, would I still hold as much respect for him as I had previously? It is here that I realized the typical stereotypes of “male” and “female” are deeply embedded in my mind. Gender has always seemed very easily defined in my environment, so I knew this reading would prove to be a learning experience ultimately opening my eyes to the reality of all the complexities associated with gender.

Cultural definitions of gender have attempted to easily distinguish males and females. In the world I’ve grown up in you are either born with a vagina or penis and then raised a certain way based upon that. From the minute a baby is born their gender and future is predetermined for them. A girl is to wear pink, play with baby dolls, and act “ladylike” and less rugged. A boy is to wear blue, play sports, and is almost expected to have a tougher attitude and not appear “girly”. For instance a certain male professor of mine told a personal story of dressing in a dress for one day at a college campus and how the people around him viewed him as strange. It has just become a part of daily life for men and women to carry on different characteristics. Barrie Thorne states, “Children pick up the gender stereotypes that pervade books, songs, advertisements, television programs, and movies…In short, if boys and girls are different, they are not born but made that way” (2). These cultural definitions have been in place to make it easier to distinguish between male and female, but what if you are neither? What if you are living as a hermaphrodite or transsexual? What if you are someone trapped in a body with male genitalia wishing to be a female or vice versa? For example, Blumlein mentions Herculine Barbin who was born in 1838 as a female but felt as though she were a man so her sex was redesignated and she was given male civil status in 1860; but this was not accepted by those around her and she took her own life as a result (2).

Also, in As Nature Made Him: The Boy Who Was Raised As Girl, John Colapinto examines the decision Ron and Janet Reimer made to surgically alter their male son to a female after his circumcision procedure went horribly wrong. They based their decision on the idea that it would be an easier life for their child to live as a female because he would receive too much ridicule as a boy with malformed genitalia (Colapinto: 2001). That clearly shows how our society has not really opened up to the idea of struggles with gender identity. The battle between nature versus nurture still arises. Would it have been better for the Reimer’s to let their son remain a boy or was their choice of nurturing their child to become a girl a wiser choice? Our society has attempted to make gender a non-issue but I believe it has pushed all genders into separate corners forcing them to fit a certain mold. This has just caused much tension and misunderstanding among people who are all actually more similar than different.

Blumlein’s experience as a medical professional was evident throughout the piece as he talks about the biological aspects of males and females. Blumlein states, “The genes that determine sex lie on the twenty-third pair of chromosomes. They are composed of a finite and relatively short sequence of nucleic acids on the X chromosome and one on the Y” (4). He then goes on to compare the brains of rats to human brains. Through research, rats revealed certain tendencies between male and female rats when choosing either pure or heavily sweetened water but Blumlein sharply comments, “Sexual differences of the human brain exist, but they have been obscured by the profound evolution of this organ in the past half-million years. We have speech and foresight, consciousness and self-consciousness…In a language whose meaning we seem to share, we say we are different, but equal” (5). We see that there are differences biologically between male and female, but that does not mean we are a whole different species. Our bodies require the same needs and go through many of the same processes, yet it seems as though many cultures are afraid to accept the blurred lines between different genders. Blumlein, however, has fully embraced this ambiguity. Blumlein openly shares his personal experiences of struggling with gender identity. He reveals his desires to experience the life of a woman. That was a bold move and I certainly have never read before of a male desiring to be female. There are many preconceived notions that a female is slightly weaker than a man, and there are certainly still people who believe men and women are not equal so why would any man want to come out and say “Yes I want to be a woman instead of a man”? Blumlein just went for it and decided to break out of the candy coated society we dwell in to reveal his doubts and struggles as a sexual man. Even his style of writing goes against what many would deem as acceptable writing when he delves into his sexual encounter with a man. “He took off his shirt and his pants and pulled my pants down…he kissed me hard and tongued me…he rolled me over, made me squat on my knees with my butt in the air…I was very dry and it hurt” (Blumlein, 17-18). This style of writing matched his content; controversial, but this is exactly what our society is in need of to better understand humanity. Issues relevant to the world we are living cannot just stay covered up and those people that do not fit into “male” or “female” should not be demoralized by the society’s desires just to keep things simple. We are very complex creatures and cannot just fit into two general categories of male and female. If someone feels trapped in the wrong body they should be able to choose a life they see as a better fit. Until we can all learn to tolerate all the differences that prevail among the human population these barriers between male, female, hermaphrodite, transgender, and transsexual will never break down.

Colapinto, John. As Nature Made Him: The Boy Who Was Raised As A Girl. Newy York: Harper Perennial, 2001.