Static: Government Liars, Media Cheerleaders, and the People Who Fight Back
An excerpt from the book Static by Amy Goodman and David Goodman (Published by Hyperion)
Identity Theory 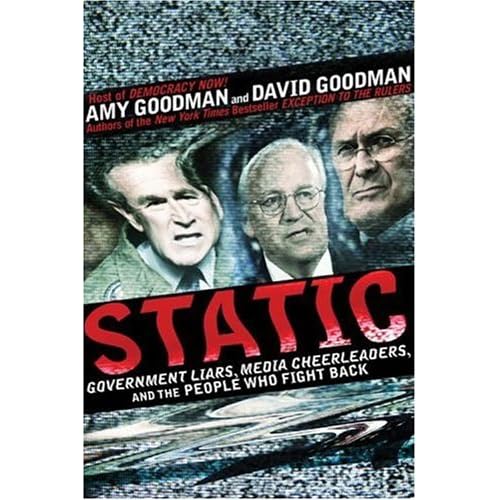 The War on Truth

President George W. Bush has long preferred illusion to reality. "See, in my line of work you got to keep repeating things over and over and over again for the truth to sink in, to kind of catapult the propaganda," Bush explained of his approach at a public forum in 2005. For Bush, there are no real problems, only political problems. The only crises are when poll numbers fall.

Bush administration officials are obsessed with controlling the flow of information. Their strategy for maintaining their grip on power is simple: Perpetuate fear. We must remain in a state of total war. The implications for democracy are chilling. President Bush has asserted a right to unlimited wartime powers. Thus the Constitution, Bill of Rights, Geneva Conventions, and the very notion of a balance of power have been shredded. The official rhetoric is that we are now in a Long War, led by the president, über alles.

The media, so cowed for so long, has failed to present a coherent picture of this frontal assault on our democracy. Alarming stories emerge, piecemeal, of warrantless wiretaps, of U.S. sanctioned torture, of offshore prisons where thousands are being held at the whim of a president who invokes sweeping life-and-death powers and dispatches propagandists to cover his trail.

Information is a crucial weapon in Bush's war. In a February 2006 speech Defense Secretary Donald Rumsfeld declared that "information warfare" will be vital to fighting terrorism. He lashed out at the media for "an explosion of critical press stories" that exposed secret U.S. anti-terror programs, including propaganda efforts in Iraq. He declared: "We are fighting a battle where the survival of our free way of life is at stake and the center of gravity of that struggle is not simply on the battlefield overseas; it's a test of wills, and it will be won or lost with our publics, and with the publics of other nations. We'll need to do all we can to attract supporters to our efforts and to correct the lies that are being told, which so damage our country, and which are repeated and repeated and repeated."

He responded to the images of and charges about American torture of detainees in Guantánamo Bay and Iraq by dismissing them as fabrications. "The terrorists are trained . . . to lie. They're trained to allege that they've been tortured. They're trained to put out misinformation, and they're very good at it," he declared.

In a speech a month later, Rumsfeld made clear that he believes the real problem in Iraq is simply the coverage: "Much of the reporting in the U.S. and abroad has exaggerated the situation . . . Interestingly, all of the exaggerations seem to be on one side . . . The steady stream of errors all seem to be of a nature to inflame the situation and to give heart to the terrorists."

The "truth" that Rumsfeld prefers can be found in the articles that the Bush administration is planting in the "free" Iraqi media, written by American psychological warfare operatives.

IRAQI ARMY DEFEATS TERRORISM blared an October 2005 story in Iraqi newspapers that said, "The brave warriors of the Iraqi Security Forces (ISF) are hard at work stopping al-Qaeda's attacks before they occur." Another planted article crowed, "The ISF has quickly developed into a viable fighting force capable of defending the people of Iraq against the cowards who launch their attacks on innocent people." The latter story was published in the Iraqi press around the time that the United States conceded that no Iraqi battalions were capable of fighting on their own.

The audience for this cartoonish propaganda is not just Iraqis: The Bush administration has turned psychological warfare, which by U.S. law can only be targeted at foreign audiences, on Americans. Rumsfeld dismissed the legal prohibitions against using foreign propaganda at home, declaring in February 2006: "The argument was, of course, that it was taking taxpayers' dollars . . . and propagandizing the American people. Of course, when you speak today, there's no one audience . . . Whatever it is we communicate inevitably is going to be heard by multiple audiences."

Rumsfeld is leaving nothing to chance. A Pentagon briefing for Army Gen. George W. Casey Jr., the top US. commander in Iraq, identifies the "home audience" as one of the major targets of American propaganda. The Washington Post reported in April 2006 that U.S. psychological operations soldiers produced a video about atrocities committed by Saddam Hussein that was "seen on Fox News." The Bush administration also attempted to hype the role of Abu Musab al-Zarqawi, the Jordanian who was killed in Iraq in June 2006. Bush officials used Zarqawi to falsely connect Saddam Hussein with the 9/11 attacks, and to bolster their dubious claim that the Iraqi insurgency was led by al Qaeda-backed foreign fighters. "Villainize Zarqawi/leverage xenophobia response," stated one US. military briefing. As part of this effort, U.S. psy-ops soldiers in 2004 leaked a supposed letter from Zarqawi to the New York Times that boasted of foreigners' role in suicide attacks in Iraq. Other reporters questioned the authenticity of the document that wound up in a widely cited front-page Times story. Brig. Gen. Mark Kimmitt, the U.S. military's chief spokesman in Iraq in 2004, boasted later, "The Zarqawi PSYOP program is the most successful information campaign to date."

The "information war" Rumsfeld describes is deadly serious. ABC News reported in May 2006 that the government was tracking the phone numbers dialed from major news organizations in an attempt to root out whistle-blowers. Attorney General Alberto Gonzales added that it "is a possibility" that journalists will be prosecuted for publishing classified information. The message is clear: The media can either participate in Bush's war, or become a target of it. As Bush administration officials have warned, journalists who do not follow the party line are promoting terrorism.

To Read the Rest of the Excerpt
Posted by Michael Benton at 11:15 AM