(I got this as a birthday present to myself over a month ago. It was just released and showed up in the mail and I look forward to when I can put aside the time to watch it. If you are interested in checking it out let me know--there is also a documentary on the director Peter Watkins.) 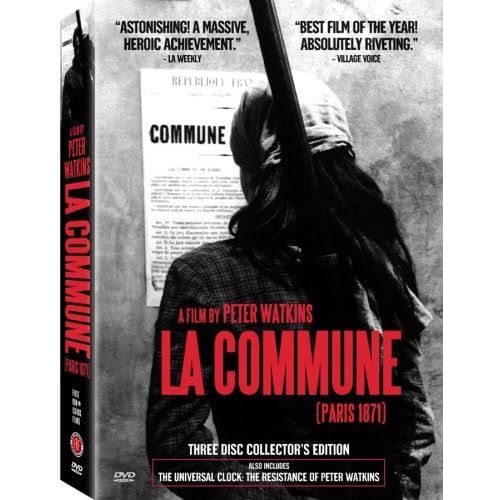 British filmmaker Peter Watkins' nearly six-hour film, La Commune (Paris, 1871), made in the year 2000, is without a doubt one of the best and most important films of the decade, and it was just released this week on DVD by First Run Features. Count yourselves lucky--the film, which commemorates the short-lived working class attempt to turn France into a socialist republic following its defeat in the Franco-Prussian War, has rarely been screened in France or elsewhere, although I've had the French DVD on hand ever since I first saw the film at a special screening in Los Angeles last year. (Arte TV in France, who financed the film, has apparently chosen to bury it, giving it as little exposure as possible.) Filled with wall-to-wall political debate, pleas for social equality and critiques of power, the film is a furious, provocative, and rousing experimental documentary that reenacts the Commune's historical moment.

After the Revolution of 1789, France went through a series of empires, monarchies, and republics. By 1871, Napolean III had been defeated by the Franco-Prussian War, prompting a six-month Prussian siege of Paris. The workers and poor of the city were suffering extremes of poverty and starvation; many were feeding on rats. A provisional government, led by Adolphe Thiers, signed a treaty that would include the ceremonial German occupation of Paris. But the French National Guard--a large network of citizens' militias who had served during the war--had no intention of opening their city to the Germans, and seized and hid cannons under the auspices of their newly-formed Central Committee. The Germans came and went without incident, but Thiers soon realized that a rival authority had risen in Paris, and ordered his army to repossess the cannons. Citizens (mostly women) in Montmarte, however, would not relinquish their weaponry; when troops were subsequently ordered to fire on them, the soldiers rebelled and a popular insurrection ensued.

Thiers immediately evacuated to Versailles (where the monarchist National Assembly resided), taking his administration, his police, most of his troops, and a lot of bourgeoisie and business owners with him; the National Guard's Central Committee promptly elected a Commune to govern Paris and implemented socialist reforms that would improve the livelihood of the poor and working classes.

Watkins begins with the Prussian siege and follows the Commune through its short existence to its brutal suppression a few months later. But his film starts with a documentary preamble filmed on the last day of the production's chronological, 13-day shoot; actors introduce themselves and the characters they play, and the camera roves around the film's labyrinthine set, a collection of rooms and alleys poised between realism and artifice. Although there are many props and period textures, the studio's concrete floor and ceiling lights are plainly visible, and continue to be throughout the film.

Thus begins the film's formal strategy to provoke active viewing; Watkins--a longtime critic of standard, "monoform" media conventions--juxtaposes period drama with filmmaking artifice in a way that tells the story, critiques the story, and challenges the way it's being told all at the same time. Dramatic reenactments are punctuated with reams of text that question and clarify the drama, offer commentary, and draw parallels to current events. Interviews with many of the film's 200-plus actors (the majority of whom are nonprofessionals recruited from Paris and surrounding suburbs, including undocumented workers from North Africa) occur throughout the shooting, which allow the participants to offer their thoughts regarding the characters and events in medias res. Finally, Watkins offers a bracing critique of mass media by imagining how Commune life would have been represented by competing modern news sources, the National TV Versailles and the independent Commune TV. The result is a multilayered and thoroughly absorbing work that is as informative and thought-provoking as it is feverishly dramatic, suspenseful, and surprisingly brisk despite its length.

La Commune is shot with striking, black-and-white digital video, often in ten-minute takes. The wide-angled footage would seem slower if the action wasn't occurring simultaneously in the foreground, midground, and background--usually in the form of public masses in "streets" or long, crowded rooms--and if the handheld camera didn't move through the crowds as often as it does, pushing from one conversation to the next. Dramatic momentum is comprised of a multitude of small conflicts, all coexisting and colliding with one another through protests, arguments, and ongoing discussions.

In all of this, the actors maintain startling conviction, even as they oscillate in and out of character--as fine a distinction that makes in a Watkins film; many of the actors developed their own dialogue through a combination of research and personal conviction. "This film showed me the huge gap between reflection and action," one woman playing a dissident remarks. "In a barricade situation, for example, deeply involved in a direct, strong, chemical, physical struggle, as soon as the camera comes up and we have to speak, it's a very difficult relationship; for reflection to connect with action. Real change will come from this type of work."

The faces are real and the emotions are palatable as the film highlights bakers, midwives, teachers, servants, mechanics, soldiers, and many other Communards who envision and attempt to forge a society founded on personal dignity, political participation, and livable wages for all members.

The Commune implements a variety of reforms and precedents: it insists on a separation of Church and State, and a free secular education for all, particularly women, who at that time were trained in religious schools only to be housewives or homemakers. ("Jesus was an anarchist, the carpenter always on strike! You have made him the God of the bourgeoisie," one women shouts at a priest.) A system of pensions for war widows is created, late-night hours for bakers is abolished, pawnshops are forced to return tools and household items less than 20 francs in value, and stores abandoned by their owners are given over to the workers (with the owners, should they return, receiving requisite compensation).

To Read the Rest of the Review
Posted by Michael Benton at 11:41 AM

Hello and thanks for the opportunity to read and post on your blog.

I’ve just posted an article related to travel tips for seniors on my blog and I thought maybe you’d be interested in reading it. Here is short preview of some of the areas I covered:

- Prefer a backpack on wheels instead of a suitcase, you could pull it behind you when your back hurts or you are exhausted.
- Consider checking your bag in with the airlines, because it would become an unnecessary burden to be dragged all over the airport or the city if you are going to have a short visit.
- You could stay outside the city, in a hostel maybe, because it is cheaper, less crowded and the air is much fresher, but you have to walk or use the transport more, to get in the city or to the station.
- Most museums, some concert halls, railways, airlines, bus lines, ferry and shipping lines have a discount policy for seniors.
- Electronic devices are useful but sometimes they can give you a lot of headaches. You could help yourself with a micro-tape recorder to record your notes. It would be easier than to write and you would put them down on paper later, to share your notes with your family.
- If you bring a camera with you to keep the beautiful images alive along the time then make sure you know how to handle it or you might fail to record them not only on that camera but also in your eyes.

For more resources on travelling to Europe you are welcome to visit my blog, where you can also get acces to some excellent maps of Rome and maps of Berlin, together with information on hotels and restaurants.

The above post is spam--do not visit the site linked.