Don Hazen: Facing Up to the Ground Truth in Iraq 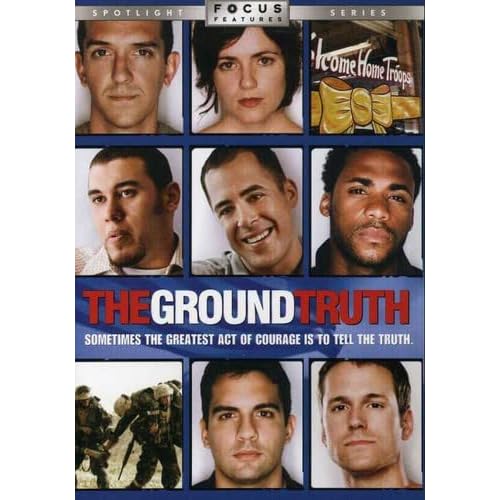 A new must-see film offers an unvarinished look at the dark truths about life for American soldiers in Iraq.

"The biggest mythology in American culture about war is that if you sign up for the military, you'll be taken care of. And I think many soldiers believe that. Even as they've watched someone they know -- a brother or a father who was in Vietnam who came back messed up and never spoke about it, and never got help -- they think somehow it will be different." -- Patricia Foulkrod, producer and director of "The Ground Truth" (from an interview with Tim Grierson in the LA Weekly).

Patricia Foulkrod's intimate, emotional and challenging film, "The Ground Truth," is fundamentally about forcing America to face its denial and take responsibility for what we have wrought in Iraq. The film challenges an avoidance of reality so fundamental among millions of Americans, who pretend that things are not as they are, that it can be said to reflect the character of our country and its citizenry. As a nation, many were hoodwinked into invading Iraq, because it was too hard to think otherwise and face the truth of having deceptive and mendacious leaders for whom many invested their confidence.

Still, too many have been too tolerant of staying in Iraq as the overwhelming costs of life, limb and resources skyrocket, while the delusional metaphor "cut and run" becomes the oft-repeated mantra of the media accompanied by the notion "things will get worse if we leave." In the face of often unfathomable brutality and violence in Iraq, that is truly hard to imagine.

But it is a third stage of the Iraq denial that Foulkrod is confronting -- that our country knows how to take care of its scarred and wounded -- and from the film it is crystal clear we can't (watch Foulkrod talk about her movie here). She also addresses something even more profound -- that the tens of thousands of young men and women returning from Iraq, who have been shaped into killing machines to survive the brutal and unpredictable circumstances in Iraq, should be able to easily become normal people leading normal lives, without a thought given to it. This of course is a fantasy as well. In the words of one soldier in the film, recruits are trained by the military with the intention of imparting in them "a sustained desire to kill."

"The Ground Truth" is told through revealing individual portraits of why the soldiers went to Iraq, what they encountered and how they feel, cope and react when they come back. And one of the most disconcerting realities of the return is the frequent realization that what they were doing in Iraq has no meaning or less than no meaning to the people in the country they are returning to. One telling moment in the film is when former U.S. Army specialist Robert Acosta, who lost his hand and destroyed his leg when a hand grenade went off in his vehicle, reveals conversation with civilians since his return to the States: "How did you lose your hand?" someone will ask. "The war." "What war?" "Iraq." Pause. "That still going on?"

One of the themes of the film is the military recruiting process, where potential soldiers are promised anything and everything, at vulnerable points in their lives, to get them to enlist. And often, only looking at the hoped-for positives that the military time might provide, many opt for an experience that is ultimately far different than they imagine. I know a little bit about this because my sister's son is in Iraq, having signed up as a marine instead of going to art school, and is stationed in a killing zone outside of Fallujah, where part of his job is to collect the remains of fellow soldiers who have been blown up by an improvised bomb.

Foulkrod's antidote to the crisis of the returning soldier is the most fundamental tool to fight denial -- talking, starting a national conversation about the realities, not the fantasies of war. The filmmaker, with the help of vets groups, is refusing to let denial force the Iraq war veterans' nightmares underground in the hope that there will be a more collective responsibility for the current and future problem of Iraqi vets, no matter when or if the occupation of Iraq ends. In fact, Foulkrod's theme is: "Their healing begins with our listening."

To Read the Rest of the Hyperlinked Review
Posted by Michael Benton at 9:37 PM

I just got into a huge debate on this very topic with a couple folks last week. Having served in a medical capacity for the military myself, I was informing them on how the military had changed even in the time that I had been in (12 years). They were ever-patriotic and refused to believe it, because their own personal experiences had been just fine. When I attended briefings with hospital administrators outlining their new business model to reduce costs while I'm running around the hospital begging for and trading supplies with other wards, yah, don't tell me we're 'taking care of our own'.

No, sadly we have a long history of neglect of veterans needs...