(This is a great series in which they pair up inspiring activists from different generations and have them engage in a dialogue.) Author, Activist and Former California State Senator Tom Hayden talks in depth with the author of No Logo and The Shock Doctrine, Naomi Klein, about the state of the fourth branch of government: journalists. Both Hayden and Klein became serious journalists in college, and it was during that time that both experienced their defining moment. When Tom Hayden interviewed Dr. Martin Luther King Jr at the 1960 DNC in Los Angeles, he asked questions while imagining the headline, "Tom Hayden Interviews MLK," but by the time he wrote the article he knew there were more important things in the world than personal glory. Naomi Klein rebelled from her liberal, feminist mother until Mark Lepine gunned down fourteen women in what became known as the Montreal Massacre. It was then she realized people were dying for the beliefs her mother fought for, and that realization awakened the activist within her. After both events, Hayden and Klein dedicated their lives to telling the truth about the world, and doing everything in their power to not use subjects like "they," but use "we" instead. It is that distinction that defines their journalism to this day. 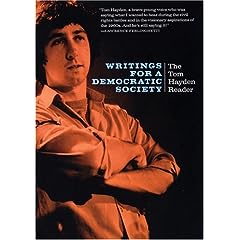 To Watch the Video

In any other profession, Carl Pope might be considered a "company man." He has worked loyally and tirelessly in the name of the Sierra Club for thirty years, running the organization – the largest of its kind in the country – since 1992. Van Jones has founded several organizations within the last decade, including The Ella Baker Center for Human Rights and Green For All. They both live in the Bay Area. They both care intensely about saving the environment. The thing is, they use very distinct methods, although the lines differentiating those methods are blurring as we race further into the 21st century. From the environment to the economy, from old fashioned door-to-door fliers to streaming internet video, Pope and Jones discuss the myriad elements effecting our lives today and the many possible solutions that are nearly within reach.

Bonnie Raitt: legendary musician, feminist, activist. Dolores Huerta: legendary organizer, feminist, activist. Two women who both achieved great successes in their fields and who are not stopping anytime soon. But while one was marching on the streets for migrant laborers, the other was headlining concerts bringing attention to the risks of nuclear energy. Two distinctly different women who chose such opposite paths and came from radically different backgrounds, but both chose to spend their lives trying to make the world a better place for all of us. In this conversation, Raitt and Huerta talk about their passions, their regrets, their fears, and most of all their dreams for future generations.

It's hard to call someone younger than 18 years old a "legend," but Ava Lowery is just that in progressive circles. She created a website at fourteen where she made videos railing against the war. Today, her site, PeaceTakesCourage.com, gets nearly two million hits per month. And she doesn't live in a liberal hotbed like San Francisco or New York, rather in a small town in Alabama. Anthony Romero is the son of a proud Puerto Rican who worked hard to support his family while waiting tables. Anthony grew up to not only be the first in his family to go to college, but to become the Executive Director of the American Civil Liberties Union, and someone we thought Ava should have on her cell phone speed dial. Just in case. Together they discuss the legal quagmire the country has become since 9/11, among other quagmires created by George W. Bush and his Administration.

In a Lower Manhattan apartment, one of the greatest living musicians and activists sat down with one of the country's newest great leaders. Pete Seeger, with a list of awards and honors longer than the neck on his famed banjo, still works tirelessly at 88 years of age. He spoke with Majora Carter, the young and indefatigable founder of Sustainable South Bronx, an organization that is re-shaping the neighborhood of her youth through pioneering green-collar economic development projects, about the environmental work he has worked at for more than forty years. And while he's at it, he also finds time to sing a couple songs, demanding the film crew sing along, because it's not nearly as much fun singing to someone as it is singing with someone.
Posted by Michael Benton at 6:12 PM