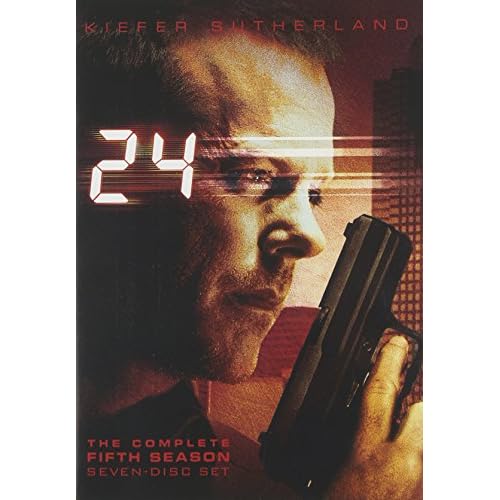 With at least one big torture scene in every episode and steadily increasing ratings, TV show "24" is more convincing than the White House at making the case for torture.

"24" is back on Fox TV -- the hit show starring Kiefer Sutherland, which premiered Sunday night, once again features at least one big torture scene in every episode -- the kind of torture the Bush White House says is necessary to protect us from you-know-who.

Back in season four, for example, the bumbling bureaucrats released a captured terrorist before he could be tortured -- because a lawyer for "Amnesty Global" showed up whining about the Geneva Conventions. Jack had to quit the Counter Terrorist Unit and become a private citizen in order to break the suspect's fingers.

It's especially unfortunate to see Kiefer Sutherland play the world's most popular torturer -- because his father, Donald Sutherland, has been a prominent antiwar activist since Vietnam days and starred in some great films critiquing fascist politics, including "MASH" and Bertolucci's "1900" -- and also because Kiefer's grandfather, Tommy Douglas, was Canada's first socialist premier, and was recently voted "the greatest Canadian of all time" -- because he introduced universal public health care to Canada. The grandson meanwhile is being paid $10 million a season by Rupert Murdoch to shoot kneecaps, chop off hands, and bite his enemies to death (Sunday's special thrill).

The show's connection to the Bush White House and the conservative establishment became explicit last June, when Homeland Security Chief Michael Chertoff appeared alongside the show's producers and three cast members at an event sponsored by the Heritage Foundation to discuss "The public image of US terrorism policy." The discussion was moderated by Rush Limbaugh. The C-SPAN store sells a DVD of the event--price reduced from $60 to $29.95. Sunday night's two-hour premiere again argued not just that torture is necessary but that it works -- and it's also really exciting to watch. The show as usual made the "ticking time bomb" case for torture: we need to torture a suspect, or else thousands, or millions, will die in the next hour.

It's the same case made by Harvard law professor Alan Dershowitz, who proposed that judges ought to issue torture warrants in the "rare 'ticking bomb' case," and by University of Chicago law professor and federal judge Richard Posner, who has written, "If torture is the only means of obtaining the information necessary to prevent the detonation of a nuclear bomb in Times Square, torture should be used." He added that "no one who doubts that this is the case should be in a position of responsibility."

Thanks to "24," tens of millions of TV viewers know exactly what Dershowitz and Posner are talking about. As Richard Kim pointed out in The Nation in 2005, those are the cases where "the stakes are dire, the information perfect and the authorities omniscient." Of course that's a fantasy of total knowledge and power, and of course the U.S. has never had a real "ticking time bomb" case -- but Jack Bauer faces one every Sunday night on Fox.

If you like this article check out Jon Wiener: On the Radio
Posted by Michael Benton at 9:55 AM