Excerpt from: The Dark Side: The Inside Story of How the War On Terror Turned Into a War On American Ideals By Jane Mayer (Doubleday: 2008) 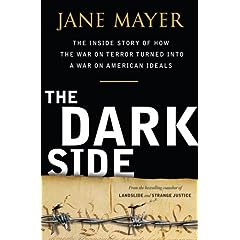 America should go "not abroad in search of monsters to destroy. . . . She might become the dictatress of the world: she would be no longer the ruler of her own spirit." — John Quincy Adams, An Address . . . Celebrating the Anniversary of Independence, at the City of Washington on the Fourth of July 1821

From the start of the administration, Cheney had confidently assumed the national security portfolio for a president with virtually no experience in the area. But Al Qaeda's attacks exposed a gaping shortcoming in the Vice President's thinking. The Soviet Union, whose threat had preoccupied Cheney and other doomsday planners in the 1980s, was gone. In its place another, more intangible danger had arisen. No one in the Bush Administration, including Cheney, had had the foresight or imagination to see Bin Laden's plot unfolding.

With the notable exception of Richard Clarke, the long-serving head of counterterrorism at the National Security Council, and a few counterterrorism experts at the CIA and FBI, terrorism hadn't ranked anywhere near the top of the new administration's national security concerns. Later, a number of top officials, including CIA Director George Tenet, would offer evidence that they had been keenly focused on the threat from Bin Laden before the attacks. If so, none succeeded in getting the President and Vice President's attention.

When Al Qaeda struck, Cheney and the other hardliners who had spent decades militating for a more martial and aggressive foreign policy were caught off guard. Frozen in a Cold War-era mind-set, they overlooked threats posed not by great armed nation-states, but by small, lithe rogue groups waging "asymmetric" warfare.

The Bush White House could have demanded an instant review of how they had been so badly surprised, as Franklin Delano Roosevelt did after the attack on Pearl Harbor, and the results would not have been flattering. But instead of trying to learn from what had essentially been a colossal bureaucratic failure, combined with inattention and a lack of political will at the top, the Bush White House deferred the focus elsewhere.

The lesson for Bush and Cheney was that terrorists had struck at the United States because they saw the country as soft. Bush worried that the nation was too "materialistic, hedonistic," and that Bin Laden "didn't feel threatened" by it. Confronted with a new enemy and their own intelligence failure, he and Cheney turned to some familiar conservative nostrums that had preoccupied the far right wing of the Republican Party since the Watergate era. There was too much international law, too many civil liberties, too many constraints on the President's war powers, too many rights for defendants, and too many rules against lethal covert actions. There was also too much openness and too much meddling by Congress and the press.

Cheney in particular had been chafing against the post-Watergate curbs that had been imposed on the president's powers since the mid1970s, when he had served as Gerald Ford's chief of staff. As Vice President, Cheney had already begun to strengthen the power of the presidency by aggressively asserting executive privilege, most notably on his secrecy-enshrouded energy task force. He'd told Bush, who later repeated the line, that if nothing else they must leave the office stronger than they found it. Now Cheney saw the terrorist threat in such catastrophic terms that his end, saving America from possible extinction, justified virtually any means. As Wilkerson, Powell's former

Chief of Staff who went on to teach National Security Affairs at George Washington University, put it, "He had a single-minded objective in black and white, that American security was paramount to everything else. He thought that perfect security was achievable. I can't fault the man for wanting to keep America safe. But he was willing to corrupt the whole country to save it."

Whether the White House fears were rational will long be debated. But it was in this feverish atmosphere that a new system of law was devised to vanquish what Bush described as a new kind of enemy in "a war unlike any other."

Beginning almost immediately after September 11, 2001, Cheney saw to it that some of the sharpest and best-trained lawyers in the country, working in secret in the White House and the United States Department of Justice, came up with legal justifications for a vast expansion of the government's power in waging war on terror.

As part of that process, for the first time in its history, the United States sanctioned government officials to physically and psychologically torment U.S.-held captives, making torture the official law of the land in all but name.

The lawyers also authorized other previously illegal practices, including the secret capture and indefinite detention of suspects without charges. Simply by designating the suspects "enemy combatants," the President could suspend the ancient writ of habeas corpus that guarantees a person the right to challenge his imprisonment in front of a fair and independent authority. Once in U.S. custody, the President's lawyers said, these suspects could be held incommunicado, hidden from their families and international monitors such as the Red Cross, and subjected to unending abuse, so long as it didn't meet the lawyers' own definition of torture. And they could be held for the duration of the war against terrorism, a struggle in which victory had never been clearly defined.

Few would argue against safeguarding the nation. But in the judgment of at least one of the country's most distinguished presidential scholars, the legal steps taken by the Bush Administration in its war against terrorism were a quantum leap beyond earlier blots on the country's history and traditions: more significant than John Adams's

Alien and Sedition Acts, than Lincoln's suspension of habeas corpus during the Civil War, than the imprisonment of Americans of Japanese descent during World War II. Collectively, Arthur Schlesinger Jr. argued, the Bush Administration's extralegal counterterrorism program presented the most dramatic, sustained, and radical challenge to the rule of law in American history.

Over a lunch at a genteel Upper East Side French restaurant in Manhattan in 2006, the year before he died, Schlesinger, a liberal Democrat but also an admirer of muscular foreign policy, chose his words slowly and carefully. When asked what he thought of President Bush's policy on torture, he peered over his glasses and paused. Schlesinger's The Imperial Presidency had described Richard Nixon as pushing the outer limits of abuse of presidential power. Later, his book The Cycles of American History had placed these excesses in a continuum of pendulum swings. With his trademark bow tie askew,

Schlesinger considered, and finally said, "No position taken has done more damage to the American reputation in the world — ever."

While there was nothing new about torture, its authorization by Bush Administration lawyers represented a dramatic break with the past. As early as the Revolutionary War, General George Washington vowed that, unlike the British, who tortured enemy captives, this new country in the New World would distinguish itself by its humanity. In fighting to liberate the world from Communism, Fascism, and Nazism, and working to ameliorate global ignorance and poverty, America had done more than any nation on earth to abolish torture and other violations of human rights.

Yet, almost precisely on the sixtieth anniversary of the famous war crimes tribunal's judgment in Nuremberg, which established what seemed like an immutable principle, that legalisms and technicalities could not substitute for individual moral choice and conscience, America became the first nation ever to authorize violations of the

Geneva Conventions. These international treaties, many of which were hammered out by American lawyers in the wake of the harrowing Nazi atrocities of World War II, set an absolute, minimum baseline for the humane treatment of all categories of prisoners taken in almost all manner of international conflicts. Rather than lining prisoners up in front of ditches and executing them, or exterminating them in gas chambers, or subjecting them to grueling physical hardships, all enemy prisoners — even spies and saboteurs — were from then on to be accorded some basic value simply because they were human. America had long played a special role as the world's most ardent champion of these fundamental rights; it was not just a signatory but also the custodian of the Geneva Conventions, the original signed copies of which resided in a vault at the State Department.

Any fair telling of how America came to sacrifice so many cherished values in its fight against terrorism has to acknowledge that the enemy that the Bush Administration faced on September 11, and which the country faces still, is both real and terrifying. Often, those in power have felt they simply had no good choices. But this country has in the past faced other mortal enemies, equally if not more threatening, without endangering its moral authority by resorting to state-sanctioned torture. Other democratic nations, meanwhile, have grappled with similar if not greater threats from terrorism without undercutting their values and laws.

But to understand the Bush Administration's self-destructive response to September 11, one has to look particularly to Cheney, the doomsday expert and unapologetic advocate of expanding presidential power. Appearing on Meet the Press on the first Sunday after the attacks, Cheney gave a memorable description of how the administration viewed the continuing threat and how it planned to respond.

"We'll have to work sort of the dark side, if you will," Cheney explained in his characteristically quiet and reassuring voice. "We've got to spend time in the shadows in the intelligence world. A lot of what needs to be done here will have to be done quietly, without any discussion, using sources and methods that are available to our intelligence agencies — if we are going to be successful. That's the world these folks operate in. And, uh, so it's going to be vital for us to use any means at our disposal basically, to achieve our objectives."

Soon afterward, Cheney disappeared from public view. But his influence had already begun to shape all that followed.

To Read More of the Excerpt