(I recently picked up the Gang of Four's "Return the Gift" as a part of my annual birthday music spree. Gang of Four were one of those important voices that broke through my nihilistic teens, alerting me that something was wrong and perhaps we should consider what that might be. Instead of the inarticulate, albeit needed, pure rage of many punk bands of the late 1970s, GOF's lyrics used a sense of irony to expose social problems. I've been playing them a lot over the past few weeks and its good to hear that their music/lyrics is just as powerful and relevant now.--Michael Benton) 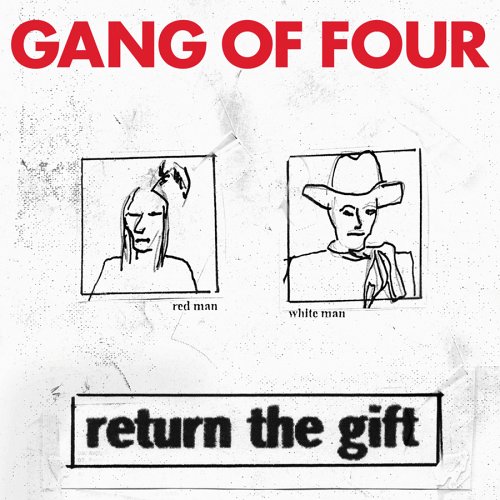 The Gang Of Four - Dave Allen, bass, Hugo Burnham, drums, vocals ("It's Her Factory"), Andy Gill, guitar, vocals ("Anthrax," "Paralysed"); and Jon King, vocals and melodica -played their first show in the summer of 1977 in Leeds, England. Burnham, Gill, and King were middle-class graduates of Leeds University: Allen was a working-class musician who answered a bassist-wanted ad for a fast R&B band. They were one of countless groups to spring up in the wake of the promise people heard in the Sex Pistols' "Anarchy in the U.K.": the rules have changed. Now anything you want, anything that's on your mind, can be made into pop music. It's your move.

There was something on the Gang of Four's collective mind, picked up from books, painting (Manet's especially), movies (notably Jean-Luc Godard's Numero Deux), not-so-fast R&B (George Clinton's Parliament-Funkadelic), and Leeds street politics (marches against the neo Nazi National Front party that ended with police violence; violent attacks by Front goons on pubs frequented by the likes of the band and their pals the Mekons and Delta 5). What was on their mind was the notion that everyday life-wage labor, official propaganda, the commodity system, but also the way you bought a shirt, how you made love, the feeling you had as you watched the nightly news or turned away from it-was not "natural", but the product of an invisible hand. It was an interested construction, someone else's project, a rulers' project. Some of the rulers were dead, some were living, but all held power. "The attitudes and beliefs that people take as being natural," King said early on, "have been inherited through the social structure they're brought up in. An example is the man who believes that women are by definition more suited to working in the home than to making decisions. The belief in the natural puts all this outside the realm of debate - and unless you have an awareness of your ideas as political manifestations, you won't believe you can change them."

"If you're not aware of the processes and thoughts by which you arrive at a statement about a situation", Gill said of the bands songs, "If you're not aware of that, you probably can't sufficiently analyse the situation". Highfalutin stuff, even after the Sex Pistols had pinned history itself as a "mad parade" and the Royal Family as a theme park, but when I first saw the Gang of Four I didn't catch a word and could have cared less. They were opening for the Buzzcocks in San Francisco in 1979; they'd just released their first album, Entertainment!, in the U.K.: no one in the audience had heard it. They took the stage and held it as if all bets were off. I couldn't take my eyes off Gill, scared, tense, but ready, he looked like an extra from a British end-of-the-world movie suddenly forced to carry the film.

I saw the Gang of Four play many times after that night - in England, in Los Angeles, again in San Francisco, after Busta Jones and then Sara Lee replaced Dave Allen, after Gill and a drum machine (on record) and Steve Goulding (on stage) replaced Hugo Burnham - and the shock of that night, its displacement, was always present. Jon King was hurled around the stage as if by an unseen puppetmaster, as instruments dropped out, leaving holes in the sound, as the wrong man plugged them, leaving holes of his own, you could almost see the puppet's strings being cut, you could certainly hear them. As King jerked, Andy Gill attacked him; Dave Allen upended both of them. Hugo Burnham hammered at all three like a judge. I walked out of that first show before the Buzzcocks came on; I didn't want to know what they had to say. I didn't want anything to break the confusion, the delicious horror, of what the Gang of Four had done.

What had they done? Always, they were talked about as some kind of rebel-rock or agit-prop ("neo-Marxist funk" as one treasured review put it), or as a band bent on the deconstruction of all received ideas, including all received ideas about rock 'n' roll. Even the band members occasionally said such things, but that wasn't exactly it.

The Gang of Four acted out, and out into records, a picture of an individual who had discovered that ordinary life - the gestures of affection and resentment one made every day, the catch phrases one spoke every day as if one had invented them - is in fact sold and bought as grease for shopping and silence, for the accumulation of capital and passivity. The person who has made this remarkable discovery begins to re-examine his or her life, and it begins to look different: "Natural's Not in It." History - "Not by Great Men." A woman in the home: "It's Her Factory."

Life looks different, but it doesn't change. The Gang of Four pursued their subject's discoveries not as if they might lead to some grand general strike, some revolutionary epiphany ("it's a good name," a fan told them, not likely thinking of China's Maoist Gang of Four, "because there are four of you"), but as if, once recognized, those discoveries would remain trapped in the prison of familiarity. Playing everyman on stage, Jon King was never free. He was an explosion of doubt. He dramatized a glimpse of liberation, but simultaneously the wish to conform, to be at home in the only home available, not matter how false.

When Hugo Burnham sings "It's Her Factory", he speaks conversationally about a news item he's encountered; he's sardonic but direct. When Andy Gill recites the theory behind "Anthrax" or the monologue of "Paralysed" when he momentarily takes over "Damaged Goods" or any of the other tunes in which he's immediately evident (his grainy voice has none of King's wail in it), he's no less naturalistic. Both men get to the point, and both are a bit forbidding. But King is the Gang of Four's patsy - and the world's. In almost every song, you can hear a very specific struggle: the struggle of the person who has heard the bad news to love it. He always fails. He realizes everything he does is second-hand, a waking dream, a dream someone else has dreamed for him - when he walks into a pub and greets friends with a line he's half-consciously lifted from last night's sit-com, he's an advertisement. He hears himself and he feels tricked, humiliated, so he smashes into his friends, into the other members of the band, as if he's never seen them before but knows they mean him no good. Screaming, he insists that he's happy.

Dave Allen, Burnham, and Gill work as the singer's bad conscience. Most pointedly it is Gill, along with King co-author of almost all of the band's lyrics and co-designer of their hilarious sleeve art. On stage he was by far the most intense and willful of the actors. He remains the locus of danger in the songs. While King splatters himself across the music, Gill is watchful, the man who knows too much; he communicates terror because he has an idea what's coming. As a guitarist he is also the narrator, to the degree that the Gang of Four, their words not much less cut up than their sound, used one. The rhythm section can frame the singer's absurdities, but not keep up with him; Gill is the musician who communicates the value of form, of one-thing-leads-to-another, even when what has to be said demands that ordinary narrative be abandoned, demands that the urge to speak, or the impossibility of making oneself understood, be dramatized rather than any message or thought. Allen, Burnham, and Gill may be the singer's bad conscience because as they play they make irrevocable choices, and fix their value; he can't.

You could see this happen on stage, and you can hear it in the music; you don't have to follow any lyric sheet. From "At Home He's a Tourist" to "Capital (it Fails Us Now)" to "I Love a Man in a Uniform" the Gang of Four's music was always about resistance, but it was not the resistance of the rebel against the ruler. It was about the resistance of the rebel against him or herself. Most of the time, most intensely, most dramatically, the struggle ends with a raging acceptance, a rage that can't find its target: that's what happens in "Damaged Goods" with its many puns echoing off THE CHANGE WILL DO YOU GOOD, a supermarket slogan, the promise of a new life summed up in a few pennies less for eggs and cheese; that's what happens in "To Hell with Poverty" and "The History of the World." Occasionally, as with the quiet mumbled "Paralysed" a person faces oblivion, in this case what unemployment is so chillingly called in the UK, "redundancy". Rage becomes meaningless, and the acceptance you hear takes on a new form: self-hate.

To Read the Rest of Dave Marsh and Goddard's Appreciation of their first release
Posted by Michael Benton at 2:27 AM